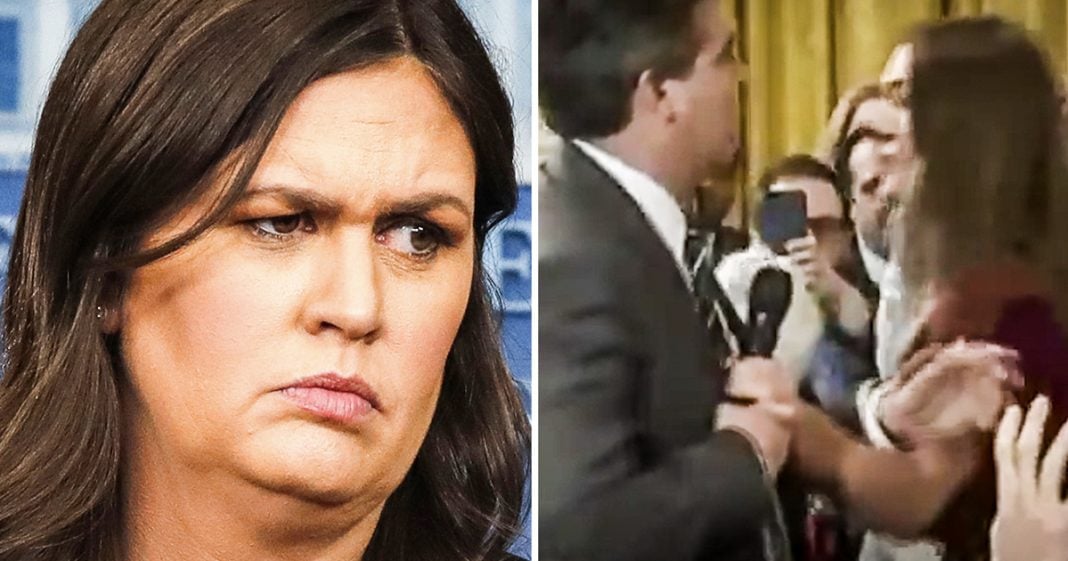 Sarah Huckabee Sanders has likely set herself up for a major libel lawsuit from CNN’s Jim Acosta after retweeting what media outlets are calling a doctored video of Acosta at a Wednesday press conference with Donald Trump. The doctored footage appears to show Acosta slamming his arm on a female staffer after she tried to take his mic, while the regular-speed footage shows Acosta making a motion with his hand and accidentally bumping into the staffer. But even if the footage wasn’t altered, Acosta still has slam dunk case against Huckabee Sanders over her false description of the event. Ring of Fire’s Farron Cousins discusses this.

On Wednesday, Donald Trump gave one of his very rare press conferences where he took questions from members of the press. One of the people he took a question from was CNN’s Jim Acosta and Donald Trump made it a point to say that Acosta’s a terrible person and he’s very rude. But that’s actually beside the point. It’s not about Donald Trump’s just assault on the press. It’s about what happened when Donald Trump got frustrated with Jim Acosta. There was a staffer, a White House staffer in the audience. She went up and attempted to take Acosta’s microphone from him. His arm seemed to be coming down because he had it up when he was talking to Donald Trump and pointing at him and his arm came down onto the woman’s arm. Now it didn’t appear, watching the video, that there was any malice intended there, that he was trying to hit her arm and knock it away. Here’s the video of what actually happened.

Jim Acosta:
-ask one of the other folks.

What is important is the White House’s description of it because that alone is enough to get Sarah Huckabee Sanders popped for libel because whether or not she tweeted out doctored footage, that just goes to whether or not she’s completely dishonest or just mostly dishonest. The issue is that they said that Jim Acosta put his hands on this woman, that he was being rough with her, that he had assaulted her when we can all see, no matter which video you’re looking at, he’s not assaulting anyone. It’s obvious that at least on first motion he’s coming down from after pointing his hand, he realizes she’s there, kind of jumps a moment. One video there could have been a frame dropping. Who knows? But the bottom line is that the White House’s description of the event is completely inaccurate. It’s an absolute lie and they’re doing it to further smear reporters as this administration is known for and to justify the fact that they have pulled his White House press pass.

I gotta say Acosta right now has a very, very solid libel case against Sarah Huckabee Sanders, not necessarily for the doctored video if it is even doctored to begin with, but for her description of the event that she sent out to the entire country. It is inaccurate. We can see for ourselves in the video and we know better. We can see it. We understand what actually happened there. Sarah Huckabee Sanders just proved that there is literally nothing she won’t lie about, even when we can see with our own two eyes that what she’s saying didn’t actually happen.