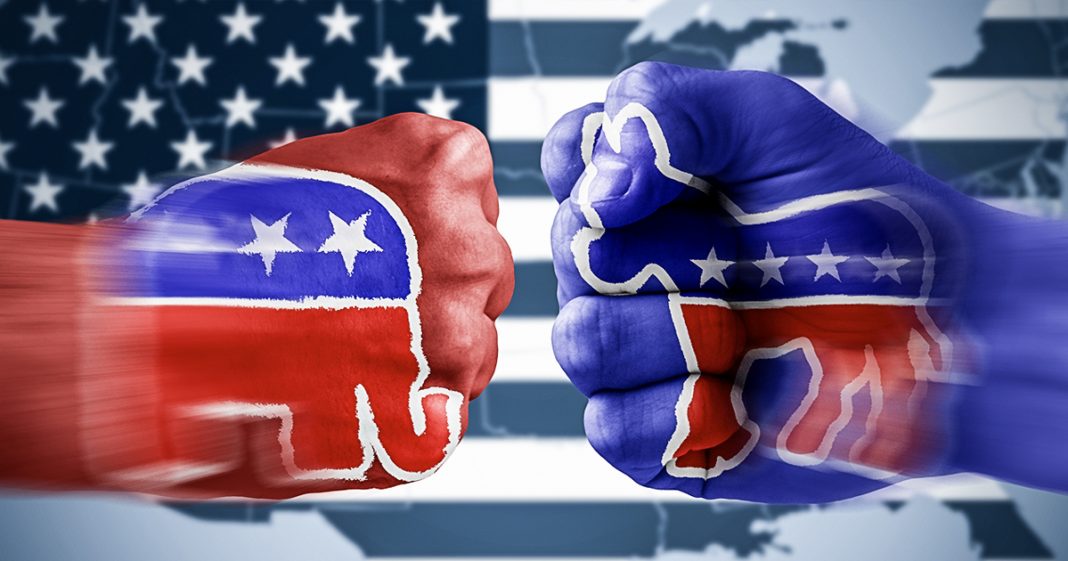 Democrats made some positive gains in the midterms, but so did the Republicans who managed to expand their majority in the Senate. But between all the hot takes about candidates not being “progressive enough” or being “too establishment” there is a point that is being missed – Republicans ARE NOT as unpopular as we’ve been led to believe, and that’s going to spell disaster for Democrats in 2020 if they don’t get things figured out. Ring of Fire’s Farron Cousins offers his analysis on the 2018 midterms.

Well, ladies and gentlemen, midterms are officially over, and depending on where you live and which party you support, you’re either very happy or very sad today. The reason I say it like that is because the midterms really were a mixed bag. And honestly, I don’t think either party walked away as the clear victors in this year’s midterms. Within an hour of results starting to come in, you had pundits on CNN, Fox, and MSMBC all saying the blue wave ain’t happening. And it didn’t. That blue wave was actually also met by a red wave, which kind of made the whole thing yeah we had historic voter turnout, but it happened on both sides, showing that Republicans were just as energized as the Democrats.

Now, that’s not to take anything away from some of the major Democratic victories that happened during the midterms. Illinois, Kansas, Maine, Michigan, New Mexico, and Wisconsin all have new Democratic governors who took their seats away from Republicans. That is a massive victory, that is probably the biggest victory, and the least talked about throughout the entire results. Those new Democratic governors have the ability to reshape those states, and at the very least, make their elections a little bit more fair by fixing some of the problems we saw yesterday.

The big losses, Stacey Abrams in Georgia, a lot of that you can probably pin on voter suppression. And Andrew Gillum down here in my state of Florida, along with Bill Nelson losing his Senate seat to Rick Scott. Both of those, according to all the polls leading up to the election, were not supposed to happen, and yet they did.

So, for those of us down here in Florida, it’s hard to feel victorious about anything. We lost a Senate seat to one of the most corrupt Republicans in the country, and we now have Trump lite as our incoming governor. Nothing to be excited about in the state of Florida today, other than the fact that we did defeat an offshore drilling amendment that was going to allow oil companies to drill within 10 miles of the shore. We defeated that, and more importantly, we’ve reshaped our electorate for the 2020 election by restoring the right to vote to 1.4 million citizens in the state of Florida who happen to be former felons. They’ve now got the right to vote back. So, 2020, the state of Florida election results are going to be very different than they were yesterday. But that’s two years away, and it’s hard to get excited about something that’s two years away.

Democrats retook the House of Representatives as literally everyone, including the Republicans predicted would happen. They lost several seats in the Senate. So, Republicans have a little bit better majority in the Senate. So, a bit of a wash. Nothing Democrats do in the house is really going to be able to be reconciled with what happens in the Senate, with the exception obviously of budget matters, which do not have to go through the Senate on every occasion. So, there’s that. We can put a stop to funding the border wall. Democrats have subpoena power in the house, which is going to be huge.

But, again, there’s not a whole lot to be optimistic about. Republicans were just as energized as Democrats, and Democrats were unable to come away with some of the biggest victories they thought they might have in their pocket. I know the race between Beto O’Rourke and Ted Cruz was a long shot, and it came very close, closer than I think anybody thought it would be. But ultimately, Ted Cruz still retained his Senate seat.

And yeah, the Beto effect they’re calling it, flipped 11 districts in Texas from Red to Blue. Is that enough? Is that even sustainable? Is that something that’s going to happen two years from now when the Beto effect isn’t there? It’s very unlikely that that is going to sustain, and that’s what I think people need to understand. I’m not trying to rain on anybody’s parade here, but I didn’t see anything happening that made me feel optimistic about 2020.

What I saw was voters across this country standing up and saying you know what, we don’t hate Republicans as much as everybody thinks we do. We’re ready to give them a little more power in the Senate. And yeah, some of the more corrupt people in the Republican party lost their races and flipped it over to the democrats, but you also had over in Nevada a dead Republican pimp, who won his election over a Democrat. So, yeah, take all that with a grain of salt if you want, but I don’t think there’s anything hugely optimistic about what happened in the midterms.

And here’s the thing that’s really pissing me off. And that comes back to the state of Florida, Andrew Gillum. Gillum campaigned with Hilary Clinton, Bernie Sanders also came down to the state to rally for him, campaigned for him. Kamala Harris, Joe Biden at one point was here. Basically all the people who you think might run for president in 2020, they all came down here to Florida to campaign for Andrew Gillum. You had people out there, not in Florida, those outsiders who came and fucked up our election for us. People out there spreading nonsense that, “Oh, Andrew Gillum’s backed off, he’s not a progressive anymore.” “He doesn’t support medicare for all anymore, he changed his talking point in one frigging tweet, so now we don’t support him. I’m not voting for him anymore.”

Thanks for pointing this out, people like Jimmy Dore and Kyle Kulinski, and all you people who have your litmus test. And you screwed with a state that you don’t live in, and you don’t understand. Let me make this so frigging clear for you idiots. I’ve lived here my whole life, and I have lived in one of the reddest parts of the state of Florida for my entire life. And both Bill Nelson and Andrew Gillum were winning their elections until this little area where I live unfortunately, until they started counting their votes. And this solidly red area is what put them over the top.

It wasn’t because he wasn’t progressive enough. It was because this area is solidly Republican, hugely racist. According to the Southern Poverty Law center, we have a huge concentration of hate groups in this area. So, you look at that and you tell me that a black Democrat could’ve won over these people by being, “More progressive,” which he already was. You just misconstrued what he said, because it didn’t fit in what your ideal of a candidate has to be.

So, thank you, thank you to those people who did that, and left us with at least four years of Ron Desantis as our governor, a guy who is Donald Trump lite. I hope you enjoy that in your non Florida state, where you won’t have to live with any of those consequences, but all of us will.

So, when you sit back behind a microphone in a state thousands of miles away, and you tell people in a different state that they shouldn’t support that person, and just let the Republican win because they’re not progressive enough for you, you’re part of the problem, not part of the solution.