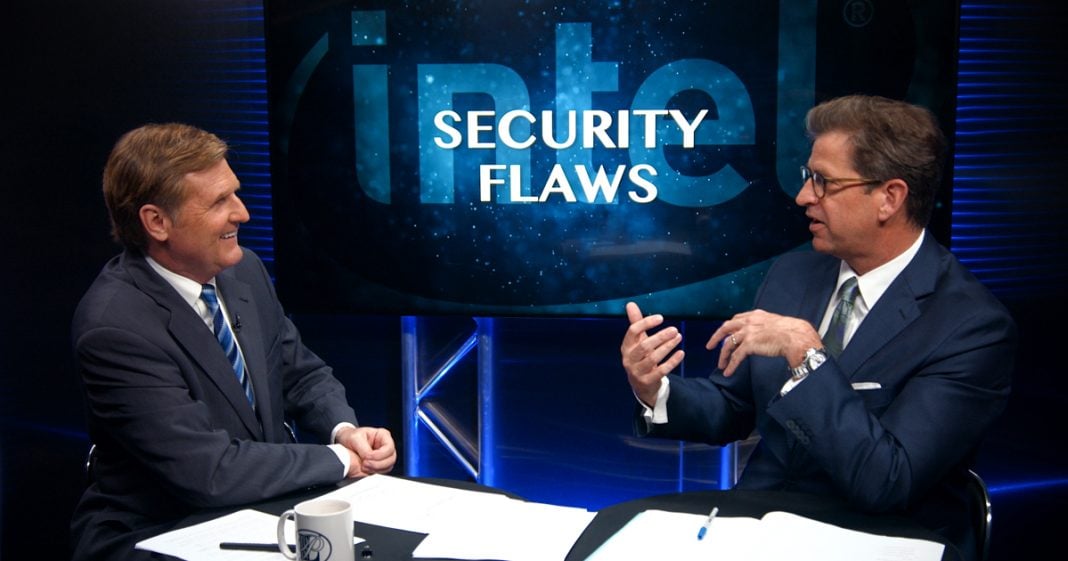 The security flaws are in the chips, which is every computer known to mankind. These chips are a bandwidth, or a bridge for hackers to come in and get information out of your computer. Ring of Fire’s Mike Papantonio and Peter Mougey discuss this issue.

Mike Papantonio: This Intel story gets weirder and weirder. Okay. You got 32, you got 32 class actions filed against Intel and what it’s about in addition to that, there’s a derivative suite that I’d like to talk about.

Mike Papantonio: Yeah. So, here you got, you’ve got security flaws. Talk about the story. Lay it out a little bit.

Peter Mougey: The security flaws are in the chips, which is every computer known to mankind. I don’t care what you own, whether it’s Intel, Advanced Micro Devices, Arm Holding, every one of those contains these chips. These chips are a bandwidth or a bridge to, for hackers to come in and get information out of your computer. So, then, Intel says, “Well, I gotta fix.” So, they put a, kind of a bandage over the bridge so hackers can get in and steal the information, but that slows down the computer.

Peter Mougey: Well, if you just spent a couple grand on a computer-

Mike Papantonio: Is it significant?

Peter Mougey: Enough to warrant 32 suits. So, you buy a computer, it slows it down, you have people getting their information hacked. So, you have, as you mentioned, you have 32 lawsuits that fit into three categories. One is, I bought my computer and it’s significantly slow or with the fix than what was advertised. I didn’t get what you sold me. That’s one.

Peter Mougey: So, it’s a derivative with the company stockholders suing the officers and directors for making terrible business decisions.

And, the third one is the securities suit, what I love, which means that they knew about, the company knew about it, didn’t disclose it. So, people that bought stock paid inflated. But, here’s what I love. The CEO, I’m not gonna pronounce his last name correctly, Brian-

Peter Mougey: Zrzanich. He sold 889,000 shares on November as part of his plan. He made 39 million dollars-

Peter Mougey: -for selling his securities while he knows this is all under way.

Mike Papantonio: So, here big Brian Krzanich, he says, “Wow! I gotta keep this quiet. While I keep it quiet, I’m going to go ahead and sell stock and I’m gonna make 39 million dollars.”

Well, okay. Who got hit … To understand, you handle derivative suits, you’ve handled them for years, a derivative suit is when the shareholder says that the conduct of management is so bad or it’s so corrupt-

Mike Papantonio: -you’ve ruined the value of my stock, right? Okay. So, what could have … So, this guy knows that his stock is gonna tank if he doesn’t secretly go do this as quickly as he can and if this information gets out then he’s not gonna make 39 million dollars.

Peter Mougey: This whole compensation system is what’s wrong with Wall Street and corporate America. We pay our CEO’s, in large part, most of their compensation comes from options in stocks, which means I’m gonna give you stock that you can execute and buy a year or two down the line and the thought is their goal is aligned with the company. Get the stock price up. But, what it really ends up is, at any means possible drive the stock price up as much as humanly possible-

Mike Papantonio: And sell it.

Peter Mougey: -keep the bad news quiet while I sell my … Exercise my options and then liquidate. So, what he’s done is he’s … And, he’s saying, “Aw, this is just part of a regular plan.”

Peter Mougey: But, you know what? If you know something bad’s coming, you can’t sell your … I mean, 39 million dollars, which is more money than 99.99% of the population’s ever gonna dream about making in a lifetime. He sold, in one liquidation, and pocketed all the while knowing that his shareholders were about to get crushed and he sold it.

Mike Papantonio: Well, I … You know, the interesting thing about the point that you just made, and this is so important, people don’t understand that it used to be the CEO of a company would be with that company sometimes 20, 25 years. Now, the new MBA idea is, get out MBA school and get into what they call the MBA network, the CEO network. What that means, they’re moving from one company to another within a period most of the time anywhere between three and five years at the most. So what happens? This thing Peter just talked about. They build in this process.

Now, let’s talk about a drug company for example. A drug company ends up making what they call, the create a cash cow, that’s a drug that they’re gonna sell to everybody, it’s gonna make a lot of money, but the CEO is already seeing the edge of a crisis. He’s seeing that, oh, yeah, we’re selling a lot of this drug, but the problem is that we know that it has potential to kill people, right? So, what he does is he maximizes all of his interest in that company, like this cat did, made 39 million dollars. He does that before the story’s out there that this drug has the ability to shut down your kidneys or this drug has the ability to shut down your liver. He gets to see that information early on. It’s insider information, but more importantly, what he does is he knows he’s moving through the company.

Peter Mougey: It does. And, the culture, to me, is what the problem … If you push it back, ’cause obviously the sale of the stock is the problem, is part of the problem, but if you push it back there’s absolutely zero incentive to stop the drug that they know has a high probability of hurting people. Maybe they know what they told the FDA is inaccurate. Maybe they get updated information. And all time they’re thinking, oh, I gotta keep this on the down low because I’ve got a 150 million dollars in options.

Mike Papantonio: And that goes to what you were saying, the system-

Peter Mougey: Yeah. Why do we continue to pay our CEO’s based on these options down the line knowing that if they keep the information down they perpetrate fraud. That’s what it is at the end of the day.

Peter Mougey: It does. It’s a whole system that says, I need to maximize potential now, not long term value, which is what it was designed, short term, quick profits, which also if you compare that to Wall Street and all the crazy trading scandals we have, everybody knows that I’m gonna take home and put in my pocket short term profit swings from crazy risk. The shareholders take the risk, I get the reward.

Mike Papantonio: They even have a term for it. The term is ‘Big risk, quick profits’.

Mike Papantonio: We actually see it in memos where there’s dialog going between management and the CEO and say, “Well, you know, to make big profits we gotta take some quick risks sometimes.” And then they pass-

Peter Mougey: Of course, the risk is the shareholders.

Mike Papantonio: -it on to the shareholders and then maybe they get caught. The company gets fined. They don’t pay any money.

Peter Mougey: They just go to the next job.

Mike Papantonio: The CEO at the same time has insurance for what he’s done. He’s committed a crime. He has killed people with a dangerous pharmaceutical that he knows is dangerous. He’s maximized his income while that’s happening and he’s outta the way. He’s moved on to the … He’s moved from Pfizer to Merck or from Merck to Eli Lilly. He’s … They’re always moving. And, if you take a look at it, you’ll be amazed at how ugly this process is.

Peter Mougey: Your storyline that you’ve been beat this drum for a long time, if you would just hold one or two of these guys accountable, put a few people doing the perp walk, they’d think twice.

Peter Mougey: Just once or twice and you would see an end to this, but instead you see this pattern repeated over and over and over in all kinds of different industries.