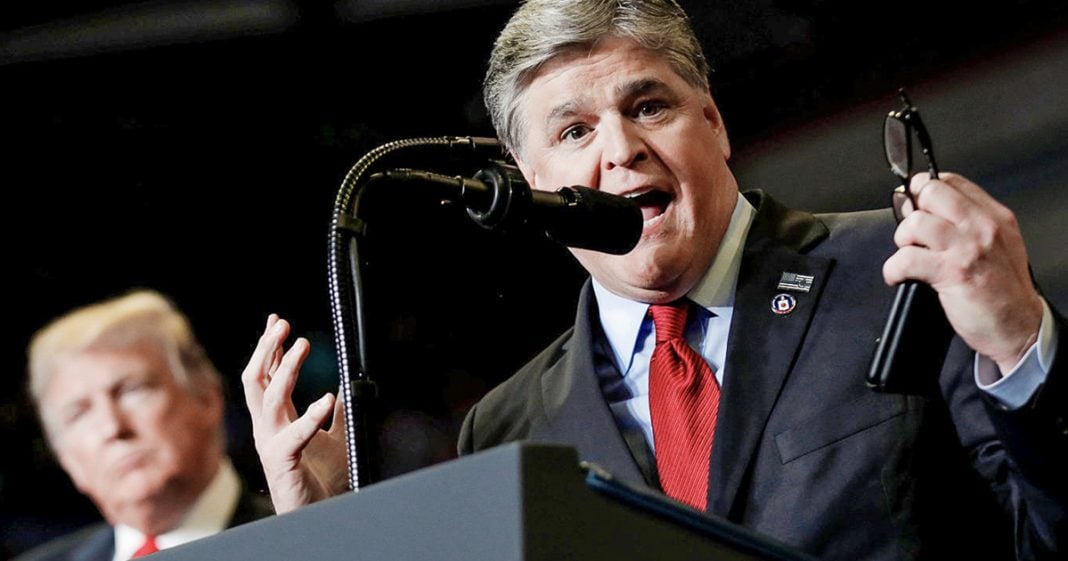 After Sean Hannity appeared on stage with Donald Trump on Monday night for his final campaign rally before the midterms, Fox News staffers were angry. After Hannity included them in his attack on “fake news”, they grew furious. Fox has completely stopped pretending to be a news organization at this point and they are fully embracing their reputation as a propaganda outlet for the Trump administration. Ring of Fire’s Farron Cousins discusses this.

Fox News employees and staffers are absolutely furious that they can’t trust Sean Hannity. Now, they should be furious that they ever at one point thought they could trust Sean Hannity, but what he did Monday night really shook them to their core, according to Fox employees who have now spoken to other media outlets about it. Here’s what happened.

On Monday evening, Donald Trump did his final campaign rally, during which he brought up both Sean Hannity and Rush Limbaugh onto the stage to help speechify things before the midterms. Here’s the thing about Sean Hannity speaking at the event, though. Sean Hannity had tweeted out earlier in the day that he was only going there to do his show. He was going to interview Trump after it. He would not be on the stage. Fox News echoed that. Sean Hannity is not going on the stage. And then Sean Hannity went on the stage and did a speech. During that speech, he pointed to the back of the room where all the media people were, including Fox News, and he said, “Every one of you are fake news.”

So it’s not only that he lied to the employees at Fox. It’s not only that he broke his promise. It’s that he literally pointed at them as well and said they’re fake news. Now, with that, I have to agree with Hannity. There is nothing real about what Fox News reports on any given day. They indeed are fake news. But they’re also the people that you depend on to help produce your show, to book your show, to write your show, because we know you’re not qualified enough to do any of those things, Sean. And now you’ve pissed off the people that you depend on the most.

Here’s what’s happening. Let me read a couple quotes of what some of these Fox News staffers have had to say. “It disturbs me to my core. I’m so effing mad.” That is what one Fox News staffer told CNN. “We were all told Hannity was going to interview the President, but no one that I spoke with expected what happened last night. I’m aghast as are a number of other people.” Really? You’re aghast? You’re aghast that Sean Hannity lied about what he was going to do? Have you met him? Is this your first day at Fox News and you didn’t know what the network was? This is what Hannity does. He lies for a living and he makes millions of dollars doing it.

At this point, if you’re still working for Fox News, you don’t have the right to be aghast or shocked at anything the network does. You know full well what they are about. If you choose to stay there in that environment and push out this propaganda every single day, then yeah, you’re also part of the problem just like Sean Hannity, who according to you guys, you’re so effing mad at today.