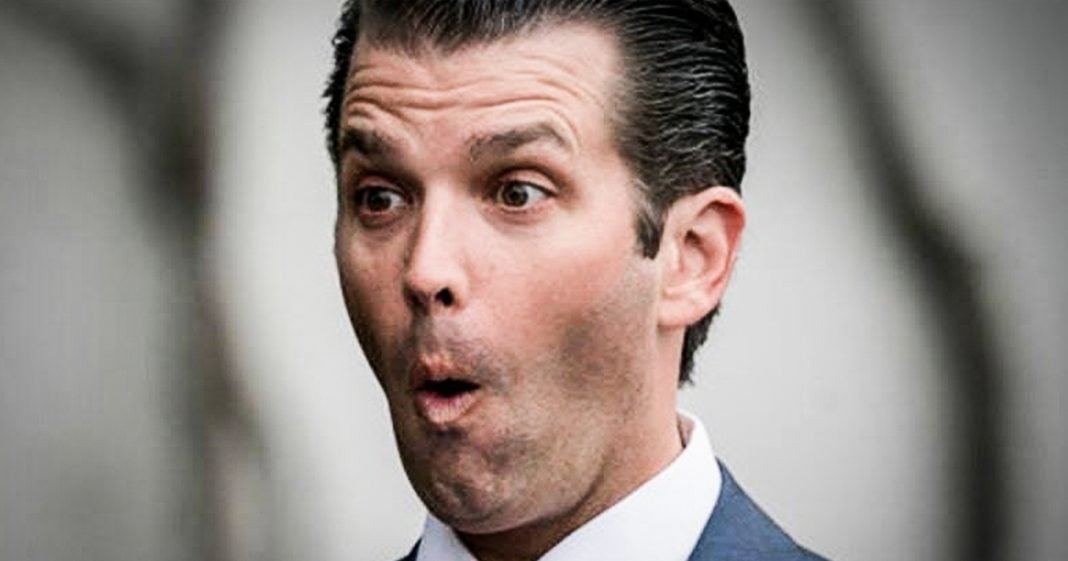 According to White House sources speaking to Vanity Fair reporter Gabriel Sherman, West Wing insiders are starting to freak out because they believe that Donald Trump, Jr. is going to be the next person taken down by Robert Mueller’s investigation. In fact, they are afraid that new indictments could be handed out the day after the midterms. Sherman points out that the silence from Rudy Giuliani is also not an accident, and it is related to the collective fear at the White House. Ring of Fire’s Farron Cousins discusses this.

You know, with all the media coverage of the midterms and the tight races and everything that’s going on with this, there’s been very little talk recently about Robert Muller, even from Donald Trump on his Twitter feed. He’s been relatively silent about this issue. He’s not tweeting out random witch hunt tweets as frequently as they used to be. And Rudy Giuliani has basically completely disappeared from the United States entirely, and they’re kind of hiding him out over in Europe where he is allegedly working with some clients over there. But here’s the thing, Vanity Fair’s Gabriel Sherman, who’s been a very reliable and credible source reporting on the Trump Administration, he’s got multiple sources inside the administration. Came out with a report recently where he talks about the fact that West Wing insiders, both current and former, are actually terrified about what is about to happen with the Muller investigation because they believe that in addition to Donald Trump, Donald Trump, Jr. might be the next person to go down. And according to Sherman, they’re actually worried that we could have new indictments coming from the special prosecutor’s office as early as tomorrow. The day after the midterms take place, they think that Mueller is going to make a move and Don Jr. might be the next person to go down.

This is according to people within the White House, so sayeth Gabriel Sherman, he has been very reliable and very on point with his sources inside the White House, so there’s very little reason to doubt what he is saying here. Although again, can’t be 100%. But I think in this instance, it’s better to give him the benefit of the doubt. The fear that Sherman says these White House insiders have is that Trump Jr.’s gonna get popped for perjury for lying about whether or not he did or did not tell his father about that Trump Tower meeting before it happened. That would be a very minor charge if it’s only perjury for Donald Trump, Jr., not going to get them in prison. Not going to result in a lot of public backlash against the administration. But it could create some legal headaches for Don at least temporarily, and they don’t want to see him go through any of that.

But the biggest thing here is Rudy Giuliani and that’s actually a good sign that this administration, Trump and everybody else is actually terrified of Robert Muller. Because there was a point before Giuliani disappeared, that every time the man went on TV he seemed to implicate his client in another crime. I mean, he was out there saying, “Yeah, yeah. We did this. He did this.” And then he’d have to go back on later and say, “Uh, yeah. I was wrong. I don’t even remember what I said at that point. I’m crazy.” He was causing so much damage that they basically made him disappear, sent him over to Europe, so that he would keep his mouth shut. And they were able to do that without people asking too many questions because again, it was midterm season.

Well, that’s all coming to an end. So on Wednesday and throughout the rest of the week and probably until we get that final Muller report, expect to see a new sense of urgency from the Trump Administration with regards to this investigation. My prediction is that before the end of the week, Donald Trump’s going to be back on Twitter telling us all what a horrible unfair witch hunt Muller is after being silent about it for the last few weeks.