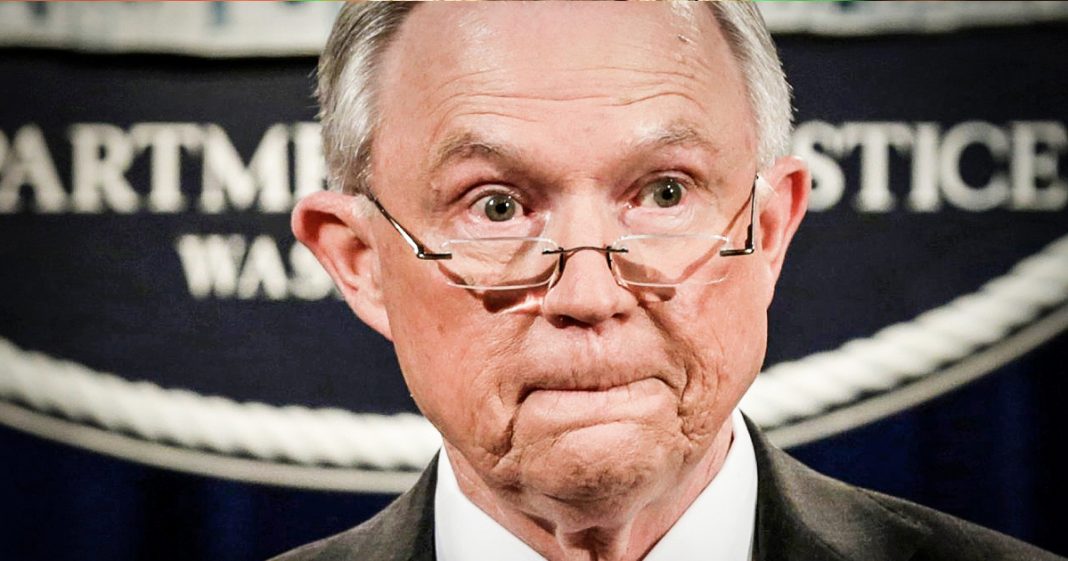 Attorney General Jeff Sessions is being a good little lackey today, and after Donald Trump tweeted out on Monday that Democrats would try to cheat to win, Sessions responded by saying that he’s sending DOJ personnel to 19 different states to make sure that no one is out there cheating. The purpose is intimidation, and that’s because Republicans are scared of what will happen to them today. Ring of Fire’s Farron Cousins discusses this.

Voting is still taking place for the midterms right now. We’re not gonna have totals. Most of them are gonna come late tonight, some of them probably not gonna come in until Wednesday, maybe even after that. But that has not stopped the Trump administration for about a week now from telling us that Democrats are trying to cheat in order to win the midterms.

On Monday, he tweeted out something to the effect of we’re gonna be watching. Don’t you dare try to vote illegally. If you do, we’re gonna prosecute you to the fullest extent of the law. So shortly after President Trump made that intimidating threat to American voters, Jeff Sessions, Attorney General of the United States, came out and released a memo saying, hey we’re gonna send out DOJ personnel to basically intimidate voters at the polls to make sure that all of this imaginary voter fraud the president’s talking about doesn’t take place. But here’s the thing, these are not trained voting rights experts. These are literally DOJ personnel. Whoever they can find, they’re gonna send them out somewhere in this country to go monitor polling stations and possibly harass American voters. This is voter intimidation coming from the highest levels of the US federal government, sanctioned by our own Attorney General.

I mean, this is borderline criminal activity on behalf of Jeff Sessions right now. Here’s why. It’s not just that he’s sending these people out to possibly harass and intimidate and even just stand there looking threatening at people who aren’t quite sure of their voting status. It’s because they’re selecting where they go. Now, they’re not going to every polling station all across the country, which is they did something like that, you could say, “Okay. Well, it’s fair. It’s even.” They’re targeting states where Republicans are struggling in their elections. Very tight races up in New York, and those races are gonna see the DOJ’s goon squad show up and try to intimidate voters. Florida, Texas, Alaska, Georgia, Virginia, all of these places, very, very tight races where Republicans are hanging on by a thread. Those are the places that the DOJ is targeting to send out their voter intimidators.

Again, I cannot stress this enough, this is borderline criminal activity coming from Jeff Sessions right now, and most likely it’s Jeff Sessions’ last bit of effort to show Donald Trump that he’s really really on his side and he’s taking it very seriously, and please don’t ever fire me, Mr. Trump. But what’s really happening is that they’re only furthering the president’s narrative back from 2016 that we have some kind of massive voter fraud problem here in the United States. As far as I know, the only two people convicted, actually convicted of voting fraud in the United States from the 2016 election, they were both Trump voters. Now I know there was the one woman down in Texas who didn’t know she wasn’t able to vote. She was thrown in jail for several years, but that was an accident that she voted, not knowing she wasn’t eligible to. We actually had two Trump voters, I believe somewhere out in the Midwest, who knew that they couldn’t cast a second ballot, but did it anyway because they wanted to make sure Trump won.

So, there’s a little tiny bit of voting fraud, and most of it seems to benefit Republicans at this point. There’s not the three to five million illegal voters that Donald Trump told us existed in the 2016 election, and there’s not widespread voting fraud today. What there is, is voter suppression. There is voter intimidation. All of that is coming at the hands of Republicans who are afraid of losing their elections. Again, (866) OUR-VOTE. If you experience any problems at the polls today, call that number and get help. Do not let these DOJ employees intimidate you, harass you, or drive you away from the polls. (866) OUR-VOTE. Know your rights, and more importantly, exercise those rights and don’t be intimidated by this criminal administration.