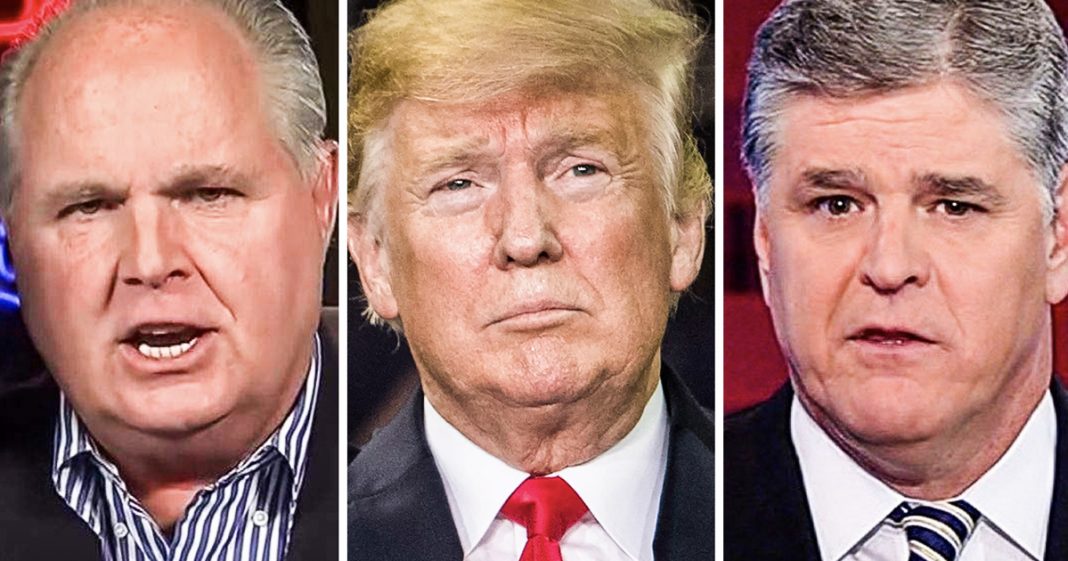 The White House has announced that Donald Trump’s final rally before the midterms will be held on Monday evening in Missouri, and it is going to feature special guests Sean Hannity and Rush Limbaugh. The two kings of hate talk will join the President at the event, but Fox News claims that Hannity will not actually be taking part in the rally, he’ll just be doing his show from there. Ring of Fire’s Farron Cousins discusses this.

Well, with the midterms tomorrow, there is one good thing that we know for certain is going to happen. Donald Trump is hosting his last midterm rally this evening in the state of Missouri. Now, that’s not gonna put an end to the Trump rallies. This is just the last one that’s gonna be before the midterms. So maybe the vitriol from the future rallies won’t be as high as it has been for the last two weeks. But we can expect an absolute crap show from this last rally that’s going to take place tonight. Why? Because of the special guests that Donald Trump is bringing to the rally. Those special guests happen to be Sean Hannity and Rush Limbaugh, the kings of right wing hate talk. Sean Hannity and Rush Limbaugh joining Donald Trump in Missouri.

Now, Fox News, after the White House made this announcement on Sunday, Fox News was quick to come out and say, “No, no, no, no. Hannity’s not actually gonna be on stage. He’s just gonna do his show from there.” I guess even Fox News didn’t want their most loyal Trump supporter to be associated with these disgusting rallies that the president has been putting on. As for Rush Limbaugh, honestly almost forgot this guy existed. I mean, with the rise of all of these other right wing hate talkers, the dominance of Fox News, which Rush Limbaugh is not on, it’s easy to forget that you still have that old blowhard out there spreading right wing hate, pushing out right wing talking points, and telling us all why Democrats are the most evil people to walk the planet.

This rally is the culmination of about a week and a half of Donald Trump doing sometimes multiple rallies per day, each one, according to analyses, telling more than 70 lies per rally. This one is not gonna be any different from those, except we might see the number of lies told increase. After all, this is his last big push before the midterms. He’s got two men that are gonna be joining him that are not known for telling the truth. So again, this is going to be an absolute madhouse at this final rally in Missouri.

Before you grab your tickets and go stand in line for four hours to see Donald Trump speak, it might be important to point out a PBS study that came out this past weekend that showed that Donald Trump is not just holding his rallies willy nilly. They know exactly where they’re going and why they’re going to those areas. Because according to this analysis, the areas that Donald Trump chooses to hold his rallies are typically lower income, predominantly white, and overall have lower education achievements for the population, meaning fewer people with advanced degrees or even college degrees. So, he’s targeting poor white low education voters for his rally. Just think about that. When you see Donald Trump on stage, when you see Rush Limbaugh standing there with him, and when you see Sean Hannity trying not to be seen on camera because otherwise his network’s gonna look like they’re lying about it. Just remember that Trump targeted these people because he thinks they’re stupid enough to support him.