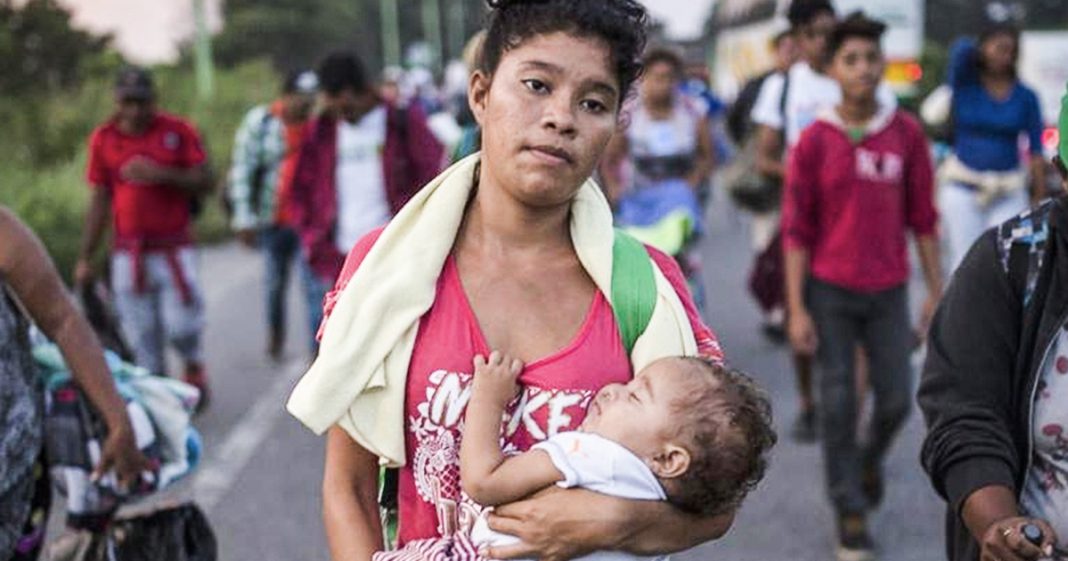 Documents released by the Pentagon confirm that the migrant caravan traveling through Central America poses no threat to the United States, and they go as far as to say that its unlikely any of them will even reach this country. But that hasn’t stopped Donald Trump from promising upwards of 15,000 armed US soldiers to protect the border, even though his own intelligence tells him this is unnecessary. This proves that Trump is using our soldiers and the caravan as political tools to help Republicans in the midterms, as Ring of Fire’s Farron Cousins explains.

For the last week or so Donald Trump has been trying to use this migrant caravan in Central America as a political talking point to get Republicans drummed up and excited about the midterms by saying the Democrats want to allow thousands upon thousands of immigrants into this country, and they’re probably filled with rapists and murderers and gang members, and possibly even members of ISIS in this caravan. Well, as it turns out, the Pentagon disagrees with Donald Trump. Last week, when they announced that they would be sending several thousand armed troops to the border, anywhere between 5 and 7,000 with an additional 7,000 on standby ready to go within 24 hours, they also released a document, a document that was actually obtained by Newsweek that said this caravan poses virtually zero threat to the United States.

This letter was given directly to Donald Trump and Donald Trump chose to ignore it because he believed that sending troops to the border and talking about the caravan nonstop would be a good political move for him and the Republican party. The sad thing is, he’s right. New polls out by NBC and Wall Street Journal this morning actually show that Republicans are getting more energized based solely on this caravan talking points being put out by the president. But again, the Pentagon itself says that these people are not a threat and that few, if any, are even going to make it to the United States border to seek asylum, which again, is 100% legal. No one that is approaching our border right now in this caravan has done anything illegal. At least nothing that we know of.

In terms of just walking towards our border to seek asylum, that is not illegal. So what they are doing, the current action itself, isn’t illegal. Whether or not any of them are criminals remains to be seen. But so far, very little evidence to even suggest that any of them could be, seeing as how most of them are just frightened women and children. That is what the Pentagon tried to warn the president. But instead, he wants this to be a political stunt. He is using our military, our soldiers, as political pawns in his midterm game. I’m sure they realize it. I’m sure they understand it.

The question is, will Republican voters understand that this caravan is not a threat to them? They’re not going to come and take over the country. They’re not going to walk in here the day before the midterms and start voting for Democrats, which is something else that Republicans have been saying. These are people trying to escape violence and come to a country that they thought, at the time, was better. At this point, I don’t even know if we can say that we as a country are better than that. There was a time when we were. But as long as we have people like Trump in office, people like these disgusting Republicans running the Senate and the House, it’s hard to say that we’re better than anyone.