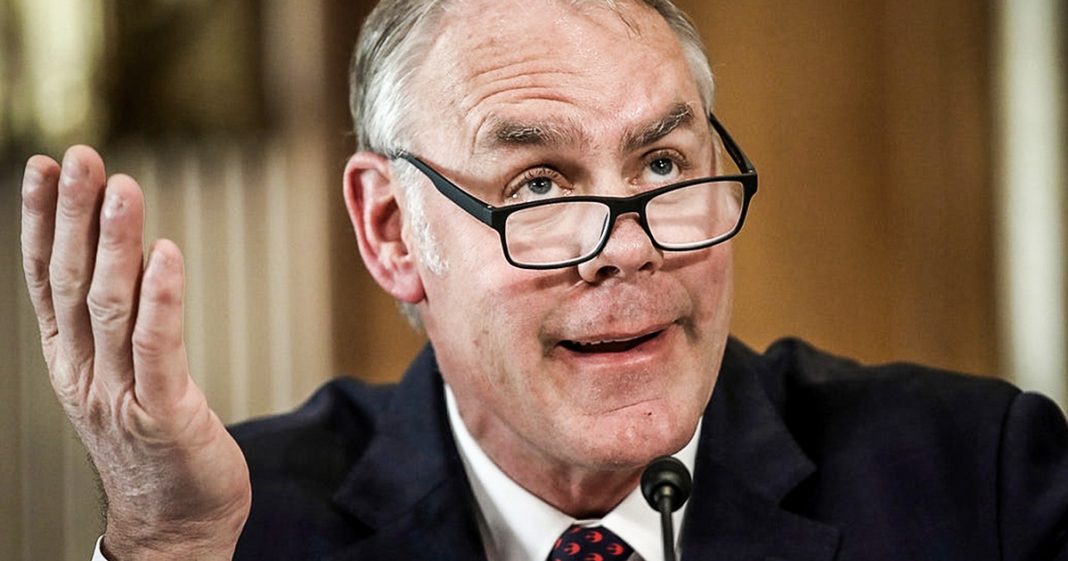 Ryan Zinke, the Secretary of the Interior appointed by Donald Trump, has been under investigation for quite some time for multiple different issues. And this week, one of those potentially illegal activities has been referred to the Department of Justice by Zinke’s own Inspector General, increasing the likelihood that Zinke is going down. Ring of Fire’s Farron Cousins discusses this.

Well, it looks like another creature from the Donald Trump swamp might be going down sometime soon as an investigation carried out by the Inspector General at the Office of the Interior has now been referred to the Department of Justice for possible criminal investigation against Interior Secretary Ryan Zinke.

But see, here’s the fun part about this little investigation that’s now been referred for possible criminal investigation. We don’t know which one it is because, you see, Ryan Zinke is actually under several different investigations by his own Inspector General, a woman by the name of Mary Kendall, who’s been with the federal government for well over a decade at this point. I think, actually, over two decades at this point. There’s multiple things that he is being investigated for. We don’t know which one it was, but here are the three top possibilities of what Ryan Zinke might end up being prosecuted for.

The first is a land deal that involved land that he owned that Halliburton was also interested in, that other real estate developers were interested in and, while he was serving as Secretary of the Interior, he engaged actively with these other corporations to work out this land deal. They also happen to be other corporations that are directly affected and influenced by the decisions that Zinke makes. Huge conflict of interest there. There could have been some dirty dealing going on. We don’t know, but if that’s what’s being referred, we will find out.

The second one, like every other member of this administration, is a travel scandal because it’s been reported and investigated Zinke and his wife have been traveling on tax payers’ dimes for non-taxpayer-needed events, for non-political events, for non-governmental events, basically just their own personal leisure, traveling, racking up hundreds of thousands of dollars on taxpayers’ expenses. I don’t think it’s this one. The reason I say that is because we know that has happened with many other members of the Trump administration, and none of them have been referred to the DOJ for possible criminal investigation, so it’s unlikely that this travel scandal is what’s going to sink Ryan Zinke or that it’s what’s even been referred for further investigation.

The third one, much like the first one, involves a casino deal this time that Zinke was overseeing. He was meeting with lobbyists who wanted it done. He was meeting with lobbyists who didn’t want it done. Then, suddenly, the deal kind of fell apart. It was a weird thing that happened there, very suspicious timing of everything compared to Zinke’s meeting with the lobbyists and his decision on the deal, so that also could be another pay to play, another potential bribery. Whatever it is, that could be the one that was referred.

Those are our three possibilities at this point, but it all underscores the larger point here, and that is that Donald Trump came into office promising he was going to drain the swamp, and all he did was appoint the most corrupt and the most incompetent people that he could find to run the federal government: Zinke, DeVos, Carson, Pruitt, who is now gone, Mnuchin, who should be in jail but instead is serving as Treasury Secretary. It’s unbelievable the list of people in this administration who are now or at least had been before they left … hey, let’s not forget Nikki Haley … involved in some kind of investigation for potential wrongdoing that could, any one of them, be referred to the DOJ for a possible criminal prosecution. It is possible that, by the time this administration finally comes to an end, we could have multiple people from his cabinet actually sitting in federal prisons, and that might be the only thing that gives us hope in these very dark times of Donald Trump.