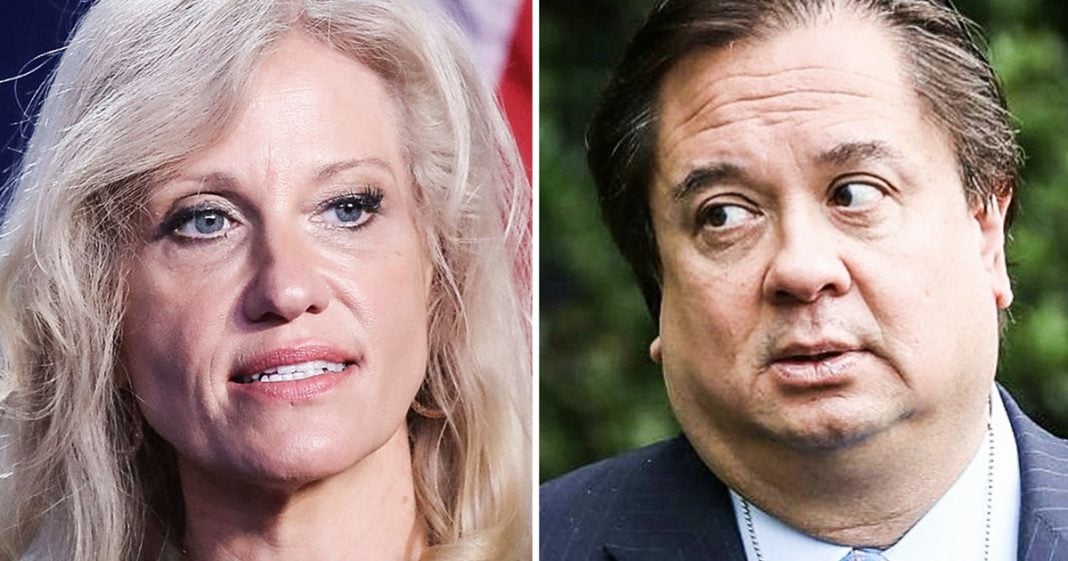 Kellyanne Conway’s husband George has made it clear for some time now that he absolutely despises his wife’s boss, Donald Trump, and this week he went to extraordinary lengths to let the world know it. In addition to co-authoring a scathing op-ed about the President and his harmful policies and words, Conway also took to Twitter to show that the President doesn’t even understand what he’s talking about with regards to immigration. Ring of Fire’s Farron Cousins discusses this.

George Conway, the husband of White House Counselor, Kellyanne Conway, has been pretty outspoken about his hatred of Donald Trump, even though his wife happens to be Donald Trump’s biggest supporter, with possibly the exception of Jacob Wohl. But that kid’s got his own problems to deal with now. Kellyanne Conway, Donald Trump’s biggest cheerleader, the woman who invented the phrase, alternative facts, and goes out there and lies for the President every single day, her husband’s not happy about it. And he spent the last week making sure that everybody who follows him on Twitter or who reads a newspaper understands just how horrible Donald Trump truly is.

Earlier in the week, George Conway wrote an op ed responding to Donald Trump’s absolutely absurd and unconstitutional call for an end to birthright citizenship here in the United States, which would fly in the face of the 14th Amendment. George Conway was very quick to point that out, and point out the fact that Donald Trump clearly doesn’t care about the Constitution, doesn’t care about the rule of law. He just cares about drumming up his anti-immigrant base, because he believes it’s going to help propel him to another four years in the White House, and that it could get Republicans energized enough to retain the House and the Senate in the midterms.

George Conway is spot on with this op ed that he actually co-authored with the former Solicitor General from the Obama Administration, Neal Katyal. But that doesn’t matter to Trump. It doesn’t even matter to Republicans. We have seen them twist logic, twist the law, twist the Constitution in a way that shows that they believe that Trump can absolutely end birthright citizenship in the United States without having to change the Constitution. They think he can do it through an executive order, which he 100% cannot do, but Republicans are dumb enough to think that he can, and they have so few morals that they’re willing to throw the Constitution aside and say, “Nope, he can do it.”

This whole thing is absurd, and that’s what George Conway is trying to point out, but it didn’t stop there with the op ed. Later in the week, he tweeted out the following after Donald Trump said that immigrants in the U.S., they don’t fall under jurisdictions so we can totally just send them back without having to apply the rule of law. George Conway said this on Twitter: “To say that illegal immigrants are not subject to the jurisdiction of the United States is just drivel. Were that true, then the government wouldn’t be able to arrest them. Surely that’s not the President’s position. He has no comprehension of the words he’s using.”

Now, that last sentence could probably apply to everything Donald Trump has said within the last three years, “He has no comprehension of the words he’s using.” But again, Conway is just pointing out the obvious, and I don’t even like George Conway. He is a hard-core conservative who believes in all of the horrible things that all the other Republicans believe in. He just doesn’t like to see what Trump has done to the party.

So, having said that, again, got to agree with him on this, because if immigrants are outside the jurisdiction of the United States, then we can’t touch them. They could come over here and, to borrow a phase from Donald Trump, “Shoot someone in the middle of 5th Avenue,” and we would just have to stand there and be like, “Well, we can’t touch them. He’s out of our jurisdiction. Oh well. Please don’t kill anybody else, if you don’t mind.”

Donald Trump is absolutely insane at this point, and immigrants, this imaginary immigrant threat, is what has driven him over the edge. So, while I disagree with George Conway on every single one of his policies, his rationale this past week has been spot on. Hopefully, at the end of every workday, he and his wife sit down, and he explains to her why the man she is working for is destroying everything that was great about this country, and how he’s too stupid to understand that he’s doing it.