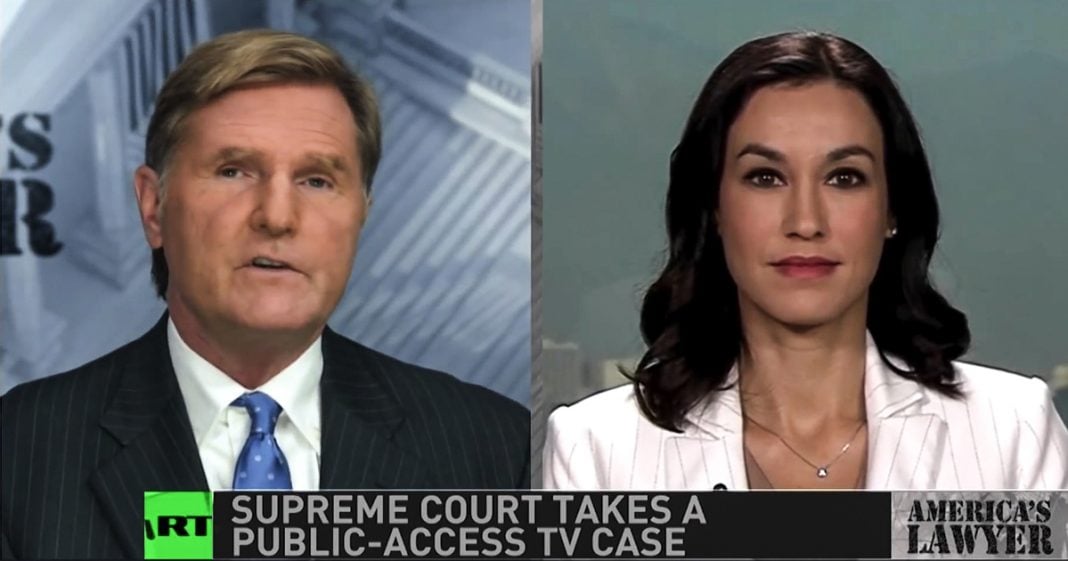 Via America’s Lawyer: The Supreme Court has agreed to hear a case that could determine whether users can challenge social media companies on free speech grounds. Mike Papantonio is joined by Brigida Santos to discuss.

Mike Papantonio: The Supreme Court has agreed to hear a case that could determine whether users can challenge social media companies on free speech grounds. While the case has nothing to do with social media on its surface, it could have broader implications for companies like Google, or Facebook, and Twitter. RT correspondent, Brigida Santos, joins me now with the details. Brigida, first, tell me about the issues at the heart of this case. What are we taking a look at that might have a vast effect on social media?

Brigida Santos: On the surface, this case looks like a dispute between a local cable station known as the Manhattan Neighborhood Network, and two videographers whose critical segment about the network was banned from its airwaves, along with any of their future work. However, the case is actually much more important than it appears because the videographers are arguing that the network is a public entity rather than a private company.

Now they say that because it works with the local government to reach viewers, it has to follow the rules of the first amendment’s state actor clause, which bans true public entities from censoring citizens speech. Now MNN is fighting the claims, and accusing the videographers of twisting the facts. They maintain that they are a private company, which does give them the right to exercise editorial control over the content that they air.

So this is really about whether the operator of a public access cable network will be considered in the eyes of the law to be a state actor that is subject to constitutional liability. And they’re also going to look at whether the courts aired in their previous rulings on this matter.

Mike Papantonio: Well, what were those previous rulings? I mean if I look at this case objectively, the thing I come up with … First of all, not Google, or none of these social medias operate without the infrastructure that was built by taxpayers. I don’t know why everybody misses that. Yes, they took the infrastructure that was initially built, they added to it, they modified it, but the initial structure was paid for by taxpayers, by everybody watching this program paid for it. So there’s at least a quasi-government relationship here, and I wonder what the previous rulings have been in that regard.

Brigida Santos: So this is where things get really interesting. Now the videographers had previously lost in a district court where the judge ruled that MNN was not a state actor because only two of its 13 board members were appointed by the state of New York, rather than a majority as outlined by precedent. But, two out of three panel members at the second circuit court of appeals later disagreed, stating that when a local government contracts to use private property for public expressive activity, it does create a public forum, and it does function as a state actor. So we’re going to see how this is going to play out, but these are two different opinions here.

Mike Papantonio: So a broad ruling from the Supreme Court could potentially open technology companies like Google, Facebook, and Twitter, to their first amendment lawsuits, which I really do believe were way overdue for. I mean we see right now, you’ve got social media that’s making decisions about even who they’re going to put up. They’re making decisions of what’s acceptable speech, and what’s not acceptable speech. It flies in the face of the first amendment.

And I’ll tell you this, once this ruling comes out, if it is one that I see provides the vehicle, I will go after these companies myself because I think what they’re doing is extremely dangerous. I saw an article this week where a Christian broadcast was taken off of the air. Somebody made the decision to take them off of the air because they were talking about an abortion issue that they disagreed with.

I mean where does that stop. So the first amendment test have got to take place, but we got to get some rulings first. I wonder, do you think it’s likely that the court is going to issue a ruling that restricts social media, and what they’re able to put forward as far as making decisions in-house. This is acceptable, this is not acceptable. What do you think the courts going to do with that.

Brigida Santos: Look, that’s definitely a concern, and in a petition on behalf of the network, the company’s lawyers wrote that the second circuits implications are incredibly dangerous because the decision will apply to areas outside the public access televisions here. And that they will reshape all state action litigation moving forward, but we have this question right now of when is corporate censorship government censorship? And that’s ultimately what this is really looking at.

Mike Papantonio: Brigida, thanks for joining me. Let’s cover this story more going forward. I think we might be able to get a break to where we can actually go after some of these social media companies, and I think it’s long overdue.