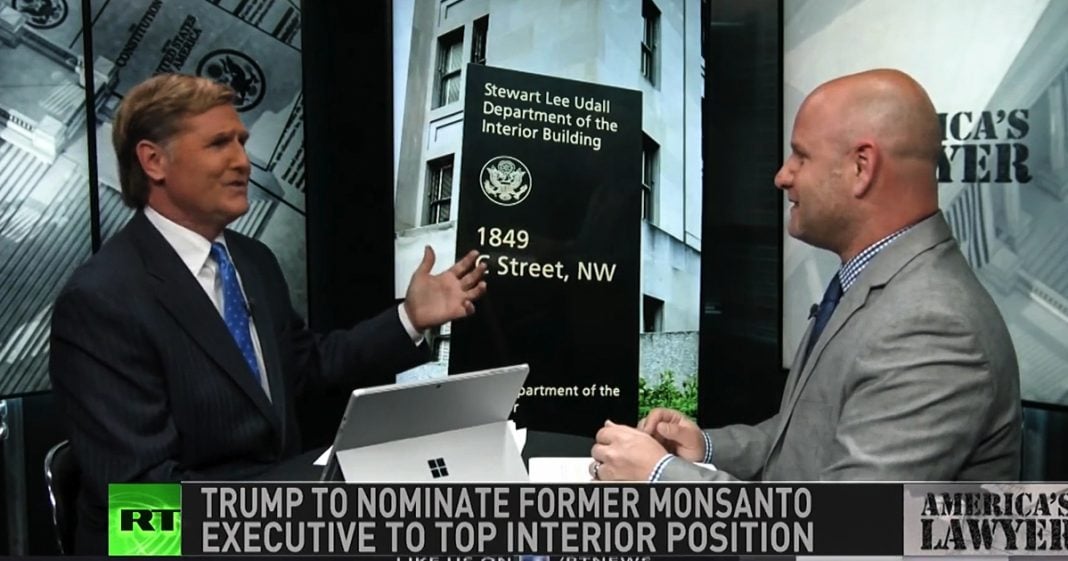 Via America’s Lawyer: Mike Papantonio is joined by Farron Cousins to talk about the former Monsanto executive that has been nominated to be the new head of the Department of Fish and Wildlife.

Mike Papantonio: The former Monsanto executive has been nominated to be the new head of the Department of Fish and Wildlife. Really? If approved, this former Monsanto employee is gonna be making decisions on a daily basis, gonna affect our environment, gonna affect endangered species. Look, Monsanto probably has done more to deplete endangered species than any company I can think of. So this woman has been hired, I think the big push here, well she’s minority, she’s an African American that’s been hired to take this job. Well the problem is she has no, she has zero experience in anything that would qualify her to do this. She’s a lawyer, and she’s a molecular genetic scientist. Has never worked in wildlife at all. When you read this, did you get the same reaction I did? Trying to look like “Gee, I’m putting an African American woman up front, and I’m okay.”

Farron Cousins: Well you know and here’s the thing too, you pointed out well she got that molecular geneticist degree, a law degree, those are great credentials. Unfortunately, for the Fish and Wildlife Service, there’s actually a rule that says you have to have experience and fish and wildlife, and the only experience that she has from working at Monsanto with fish and wildlife, is killing it and giving the fish and wildlife tumors and cancer. We know that from lab studies.

Mike Papantonio: We know it, we know it actually, I know it from documents.

Mike Papantonio: Actually documents I’ve reviewed where Monsanto’s saying “We’re not so sure this Round-up, this glyphosate we’re making isn’t killing fishes, is not killing fish and is not affecting wildlife in a really, really bad way. And this is where she comes from.”

Farron Cousins: Well it is and you know this is a horrible move by this administration, completely something that we would expect really, but Monsanto has done a great job of hedging their bets on both political parties; they’ve been doing it since they got the EPA back in the nineties, to reverse their decision about Round-Up causing cancer. It’s because they have so much influence and so much money, they can buy either political party and get their way and that’s what’s happened here. They gave 25,000 to the Inaugural Fund, back in early 2017.

Mike Papantonio: Well they’ve given a lot more than that.

Farron Cousins: All right, but that was just to the Inauguration Party.

Farron Cousins: And now, this is their payback. They get their person at Fish and Wildlife; they get regulations slashed, they’re allowed to run rampant, whatever they want.

Mike Papantonio: They declare that we are the new and improved Trump Administration. We’re bringing in African Americans now, to make decisions. But this is classic, I think your point, the most, she hasn’t been, this isn’t final, at this point.

Farron Cousins: Right. She will be. I mean Senate’s not gonna stop her.

Mike Papantonio: Senate will not stop her. But I think it’s so interesting that even, on the books, there’s always been, clearly on the books, that a person who takes this position has got to have extensive experience in wildlife management.

Mike Papantonio: She has zero. They’re gonna have an exception here, and your call is the same as mine, they will make the exception. I thought it was interesting, Ducks Unlimited, Ducks Unlimited, came out and said, “Oh, this is a wonderful selection.” I mean what is that about? Is it unlimited duck dinners by Christmas? Or what is that about? I don’t quite understand that connection, but thanks for joining me Farron. These stories, as I say every week, we see a different angle on what’s happening in politics in this country and most of these stories right now are getting a little freakish.