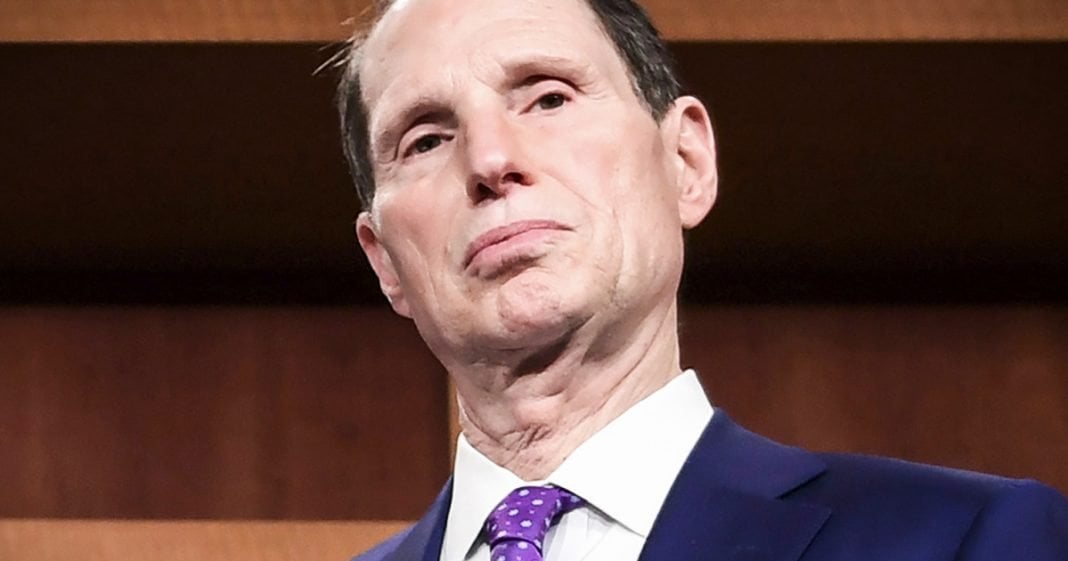 The Democratic Party might actually be evolving as a Party. This week, Democratic Senator Ron Wyden released a draft of a privacy bill that he and the Democrats have been working on that would give consumers more protection from corporations leaking their data and it would also allow the executives at these leaky companies to be criminally prosecuted. This legislation is necessary and way past due, as Ring of Fire’s Farron Cousins explains.

It appears that the Democratic Party might actually be evolving. They seem to understand that people in the United States want some accountability. And not just with this current administration, but with corrupt corporate executives who seem to get away with any kind of crime or malfeasance that they can imagine.

This week, Democratic Senator Ron Wyden, released a draft of a new privacy bill that he and other Democrats have been working on that would actually call for prison time for tech company CEOs that leak your personal data.

Here’s the reason this piece of legislation is so important. Over the last two years we have seen massive data leaks, data breaches by some of the biggest social media companies and tech companies in the United States. Equal facts, Yahoo, Facebook, Gmail. All of them have had these massive data leaks where the private data of US citizens was leaked out to hackers and anyone else who knew how to access that information. Millions, upon millions, upon millions of people, some of them had their data leaked in almost every single one of those particular instances. And there were many more than I didn’t even list.

Democrats not only understand that cyber security here in the United States is a complete joke, but they also seem to understand that somebody needs to be held accountable. Right now all we’ve seen is a couple of small class action lawsuits come out against these companies, which is great. It helps make the people who are the victims whole again. We’ve seen the companies have to pay [inaudible] fines. They’re multi-billion dollar companies and they pay a couple $10 million fines. Somebody needs to be held accountable more than that.

When these tech CEOs are out there buying up these huge swaths of property down in paradise, building multi, multi-million dollar mansions, getting away with leaking our data and never feeling any consequences, the American public is sick and tired of it. And the Democrats finally seem to understand that with this piece of legislation. So here’s how this new legislation would work. First and foremost, it would create a National Do Not Track database, which means if you register for that, your websites are no longer allowed to track your data and sell it to third parties.

If there is a data breach and your name gets leaked, your information gets leaked from a company that has more than $50 million per year in revenue, which would apply to Facebook, Twitter, Gmail, Yahoo, all of them, then they’re subject to criminal penalties, including jail time. Because these executives, including the CEOs of these companies, would be forced every year to sign off on a cyber security assessment. Their personal signature would have to be on that piece of paper. And if they failed, if they let your data get out there to the public, they would be the ones held responsible.

CEOs in the United States from all industries, oil industries, banking, industry, tech companies have gotten away with too many crimes for far too long. And this piece of legislation, if it is successful, would be the first time that we would have in writing that the CEOs are absolutely responsible, liable, and will be held accountable for the actions or the lack of actions taken by their companies.