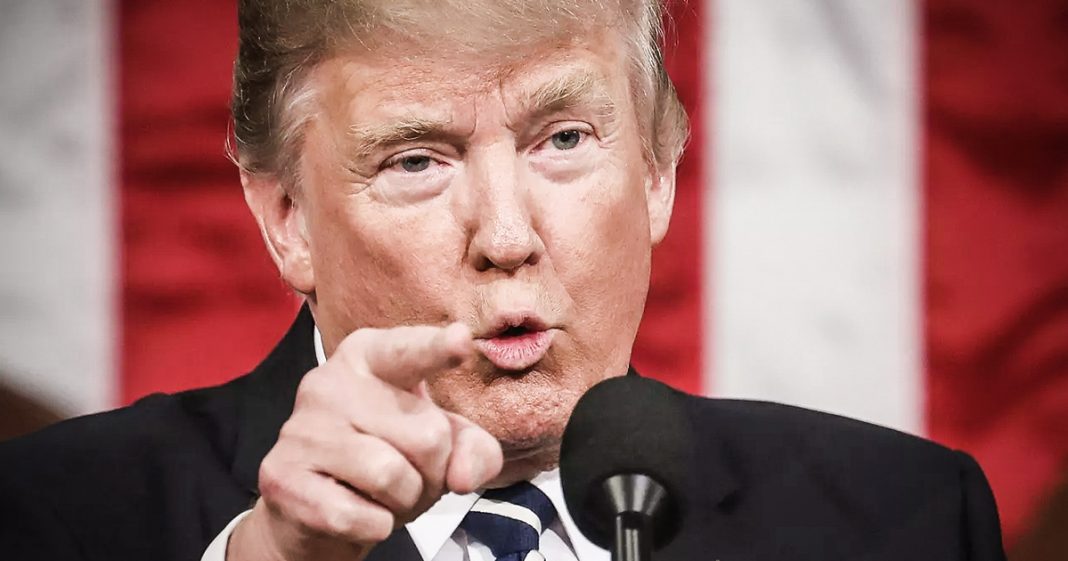 Last week, it was Republicans preparing to blame Trump for their expected midterm losses, and now its Donald Trump preparing to blame Republicans. A leaked White House memo shows that the President wants to blame Republicans for the potential losses. The funny part is that neither of these groups understand that they are BOTH responsible for the expected losses – they feed off of each other and the voters notice things like this. Ring of Fire’s Farron Cousins discusses this.

Last week I told you how the Republicans running for office in this year’s midterms, and even the ones who don’t have to run for office, they had already been preparing, according to GOP strategists who talked to Axios, they were already preparing their talking points to blame Donald Trump for the expected midterm losses that they think are going to happen on Tuesday. Now, earlier this week, we got a copy of a leaked memo, of Politico, or Bloomberg, excuse me, got a copy of a leaked memo from the White House where they’re actually planning to draft their message, and they’re laying the framework right now to say that the Republicans are the reason they lost, not Donald Trump. Donald Trump is totally exonerated according to this leaked White House memo. These were Donald Trump voters. This was Donald Trump’s state. It wasn’t a red state or a blue state. It was a Trump state, is actually what it says in that crazy memo, and Republicans failed to capitalize on the popularity of President Donald Trump in that particular state, and that’s why they lost.

What they’re going to try to do is say that Donald Trump came out there, he did X number of rallies, he raised X number of millions of dollars for each candidate, and they still couldn’t do it right because they didn’t fully embrace the president. Had they embraced Trumpism, had they worn that big MAGA banner on their back, they would have won because the people want little Donald Trumps running as their Congress people, little Donald Trumps meeting with them, and holding their own little rallies. Millions of little Donald Trumps running all over the country, but the Republicans didn’t give it to them, so that’s why we got Democrats. It’s all the Republicans’ fault. Flock to me, Americans, Donald Trump, and I’ll make everything better in 2020. That’s going to be their message, but like I said last week, with Republicans preparing to blame Trump, and now Trump preparing to blame Republicans, I think those two groups both need to buy some mirrors, and just look in them, and see who is really to blame, because it’s every single one of you.

Again, let’s not put the cart before the horse. The midterms haven’t happened. There may not be a blue wave. Signs point to yes, but signs have been wrong in the past, so Republicans may be preparing these talking points for no reason at all. I don’t think that’s likely, but need to throw that out there just in case, but here’s the thing. The reason voters are pissed off right now is because they understand how crazy the man in the White House is, but it’s not just that they’re mad at him. They’re mad at every single Republican that is enabling him, and they’re the ones up for reelection, so they’re the ones who have to pay the price. They refuse to stand up to Donald Trump. The few who’ve had the courage to occasionally speak out against him publicly while voting with him more than 90% of the time, by the way, but they spoke out publicly, but they’re not even seeking reelection, so they’re gone, those mealy-mouthed, brave Twitter conservatives who bow down before Trump any time they have to actually cast a vote. Voters are angry about that. Voters don’t want that. Voters want a check on the seemingly endless power that Republicans have in our government today.

That’s why Republicans are poised to lose. Part of it is Donald Trump. Part of it is Republicans, and most of it has to do with their horrible policies. A week and a half ago Republicans in the Senate actually did vote to strip one and a half trillion dollars from Medicaid and Medicare. They did. They voted for that. Voters don’t like that. Voters depend on those programs. They pay into those programs, and if you’re going to cut money to the beneficiaries, and we’re still paying all that money, each paycheck, every single check, it comes out, where’s it going? They know where it’s going now. It’s going to the wealthy elite, and they’re pissed about it, because they don’t get a dime from that tax cut. Republicans, Trump, Fox News, you can blame every single one of them, and that’s pretty much what’s going to happen if Republicans lose the midterm. There is going to once again be even more finger pointing among them. You’re going to say, “You did it. No, you did it. No, they did it. No, he did it. No, she did it.”

At the end of the day, kind of like when Democrats lose, a lot of finger pointing, a lot of yelling, a lot of shouting, but no one actually taking the time to look in that mirror and say, “You know what? Maybe it was me.”