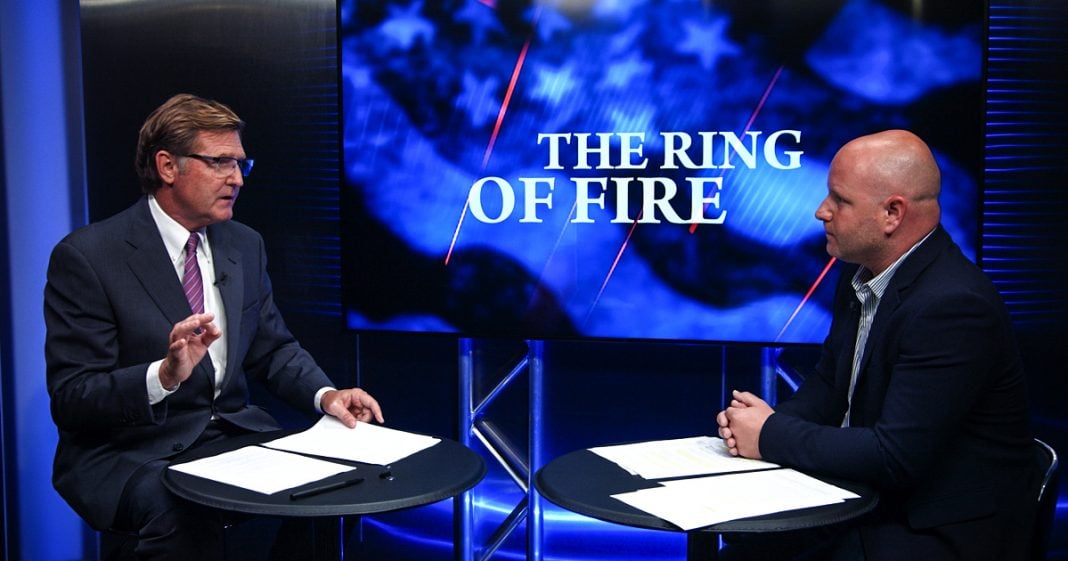 A new report, again, concludes that fracking is causing earthquakes, more and more earthquakes around the globe. And now lawsuits are helping hold the frackers liable for their action. Ring of Fire’s Mike Papantonio and Farron Cousins discuss the issue.

Mike Papantonio: A new report, again, again, let me stress the word again, concludes that fracking is causing earthquakes, more and more earthquakes around the globe. And now lawsuits are helping hold the frackers liable for their action. But more importantly, in these lawsuits, the studies are overwhelming. There’s no guesswork. It’s like, “Here’s the facts. You did this fracking in this area, this 100 square mile area, and we had earthquakes generated from that area.” So there’s no guesswork here. For the industry to say, “Oh, this is just nonsense, phonied up science,” is insane. It’s overwhelming science isn’t it?

Farron Cousins: Right. Because we’re looking at areas, even before this new report, where they would have maybe six earthquakes a century. But now they’re getting dozens every single month, ever since the frackers moved into town. And on top of that, we’ve known. People don’t understand, fracking is not something that just came about. There has been some form of hydraulic fracturing in the United States for over 100 years. And back then, early, early 1900s, turn of the century type, they were doing a form of fracking. And what they determined then was that, “Hey, when we came in and we started pushing all this water with all these chemicals in it into the earth, we created earthquakes. So we stopped it.”

Over in the UK several years ago, they banned fracking. I currently do not know if that ban is still there, but they banned it because the link between fracking and earthquakes was so overwhelming that they could not in good conscience let this happen.

Mike Papantonio: Okay, and before we get all the emails about, “Oh, the Trumps are terrible,” no, fracking came to an absolutely height, highest level of fracking in America under Obama. When Obama was told, his own scientists were telling him, “Stop this,” because we even know how it occurs. What ends up happening is you create pressure, it deforms the rock that surrounds fault areas, okay, where if you can imagine the rock that was once in place holding the fault in place is moved. The fault then moves, it progresses, and we have earthquakes. The thing about it is, for a long time they tried to make this sound like crazy science. And then some of the best universities in America said, “No, we even have a name for it.” They actually put a name on this, didn’t they?

Farron Cousins: And that’s what it is. As you described, you go in there, you put more pressure into the earth that basically get trapped inside the bedrock. And that pressure has to come out. It will force itself out, and it does so through these earthquakes. They have known about it for a long time.

Mike Papantonio: Okay, the other part to this story that is not really well discussed is the toxicity of what they’re putting into the aquifers. We brought lawsuits. We and some other environmental groups brought lawsuits to find out what is this stuff that you’re putting into the earth because it’s ending up in the waterways, it’s ending up in the aquifers. Well, the court actually prevented us from getting that information. They said, “Well, this is their private information. They have a proprietary interest in this. We can’t tell you what poisons are in there.” So analysis was done. They had analysis done by people that were actually … illegally obtained some of the information. And they found out, yeah, this stuff, you don’t wanna drink it. As a matter of fact, there’s a great program called Gasland, most people know about it, where they actually showed that the toxins in there are so strong, and the benzene and some of the stuff that creates fuel is in there, that they could turn on a faucet, light the water that’s coming out of the faucet, and it would burn like a candle.

But this didn’t happen because of the government. This happened because of all you lawyer-haters out there. You wanna understand, you lawyer-haters need to understand, this was lawyers who said, “Damn it, the government won’t do it. We’re gonna do it ourselves.” They found this material, they tested the material, and there’s no question, not only is it toxic, the toxins are particularly bad because they cause latent diseases, they cause birth defects, they cause all types of problems. So the earthquakes are really only one part of this story. I think that’s significant.

Farron Cousins: And on that lawyer front too, we have to understand that the government, and the companies, they all knew that fracking was causing the earthquakes, we had all these industry studies for years and university studies that said, “Yeah, this is happening.” But it wasn’t until the lawsuits started being filed when anything was even done about it, because you’re not gonna get a regulation. The industry’s not gonna fix itself. Without these lawsuits, we’re just gonna be looking at more and more earthquakes, more property damage, potential deaths from it. That’s the only line of defense.

Mike Papantonio: Well, you’re dealing with … the problem is, property damage is bad, but death by cancer, death by neurological disease is pretty bad too when you’re having your children drink water that comes directly from an aquifer that has been poisoned by these folks. So this actually started with a small group of environmental lawyers. They fought, they did everything they could to figure out, “How do we get around it?” Those environmental lawyers then hooked up with trial lawyers who actually try these types of cases. And the material they found is extraordinary. And it’s gonna continue to come out. There’s no way the industry’s gonna be able to stop this.