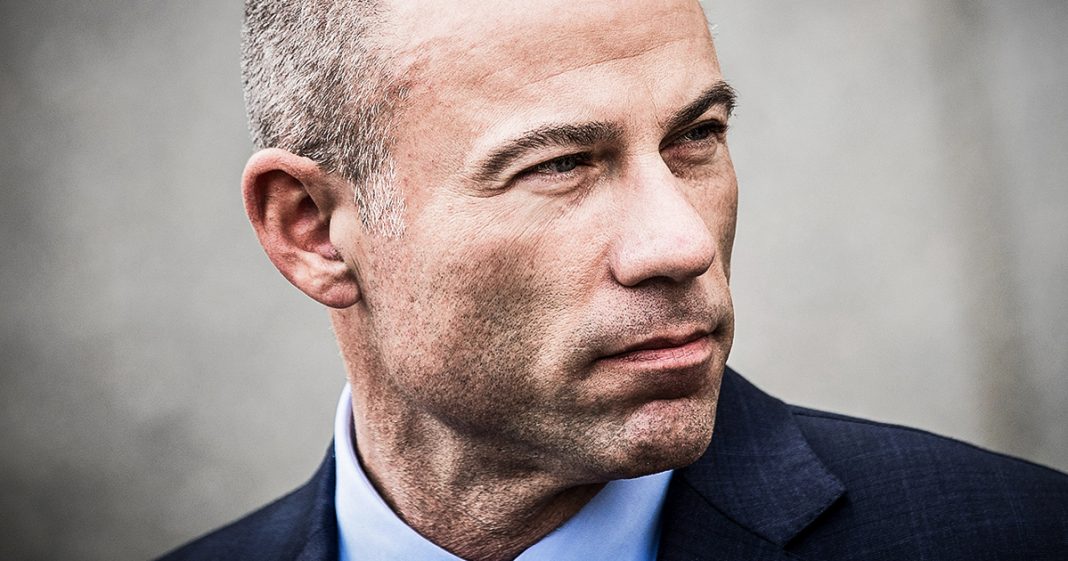 According to reports by Politico, Michael Avenatti has been working with longtime Democratic advisers and campaign staffers to coordinate meetings with donors and other people close to the Democratic Party, increasing the speculation that he’s going to run for President in 2020 against Donald Trump. People seem divided about whether or not Avenatti is the person the Party needs right now, or if he’s just trying to extend his 15 minutes of fame a little bit longer. Ring of Fire’s Farron Cousins discusses this.

According to a new report in Politico, Michael Avenatti, the lawyer for Stephanie Clifford, the guy whose been very vocal on taking on Donald Trump both in media interviews and on Twitter and in other appearances, Michael Avenatti is quietly building this coalition that could possibly be leading up to a 2020 presidential run.

Last Thursday, Michael Avenatti got in a little bit of trouble when he claims the media took his quote out of context, but he said the next Democratic nominee for president better be a white male. Maybe he was referring to himself, not exactly what kind of context that could have been taken out of when you say that the next nominee needs to be a white male. Really no other way to view that. But nonetheless, according to Politico, Michael Avenatti has been meeting with Democratic advisors, former Democratic campaign staffers including a lot of those who worked for Hillary Clinton’s campaign. They’re introducing him to donors, they’re giving him talking points, they’re helping him craft a message and policies. All of this clearly points to the fact that Michael Avenatti is likely running for president in 2020.

A lot of people on the left are not happy about this. There’s some that are happy. They believe that Michael Avenatti is absolutely the hope of the Democratic party, he is the future, he is the only one brave enough and strong enough to stand up to Donald Trump and I can promise you folks, he is not. Michael Avenatti has been a good trial lawyer. Very good trial lawyer. Very successful. Good at taking on corporations. He’s done well for his clients and he’s done well for himself as a result of that. That doesn’t necessarily mean that this man should be trusted to be the next President of the United States.

What he’s trying to do right now is extend his little 15 minutes of fame. Yeah, you got popular because you were representing the porn star that the president tried to pay off to keep her quiet about her affair. You really had a shot to take him down with that, that’s still ongoing at the moment though, maybe he can take him down with that. But that doesn’t mean that you’re going to be able to stand up next to Donald Trump on a debate stage while he’s spreading lies and conspiracy theories and think that you can just sit there and attack him and call him out on that and that it’s going to change a single vote in the United States. That didn’t work in 2016. Now you’re meeting with the exact same people who thought that was a winning strategy in 2016.

What’s going to defeat Donald Trump, assuming he’s still in office in 2020, is policy. Policy, policy, policy, and if there’s a little time, more policy. You’re not going to beat him at a personality contest. You’re not gonna beat him by pointing out that he lies. Majority of Republicans in this country know that he lies and say that they don’t care. That’s not how you defeat him, but that’s what Avenatti is coming with.

Now don’t get me wrong, Avenatti, with the exception of his brain dead comment last Thursday, that honestly should have already derailed any presidential hopes the man had, he had been doing prior to that a good job being in the media and being the attack dog against Donald Trump, freeing up the Democrats, the elected officials to actually talk policy. That’s what we need. We need people out there willing to call the president out on his nonsense, while the politicians don’t get dragged into it and they talk policy. That’s been working actually pretty well right now. That’s why we’ve seen so many progressive, true progressive candidates winning in the primaries, even against establishment Democrats.

But if you think Michael Avenatti is anything other than an establishment Democrat, you are absolutely kidding yourself. He is an attack dog, he is fierce, he is ferocious. Those are traits that actually most good trial lawyers have and Avenatti again, has been a great trial lawyer, but that’s what he needs to stick to. Leave the politician, uh leave the politics, excuse me, to the politicians, the people who know how to go out there and talk policy. There’s a lot of people who do understand right now what it’s going to take beat Donald Trump and unfortunately for him, Michael Avenatti isn’t one of them.