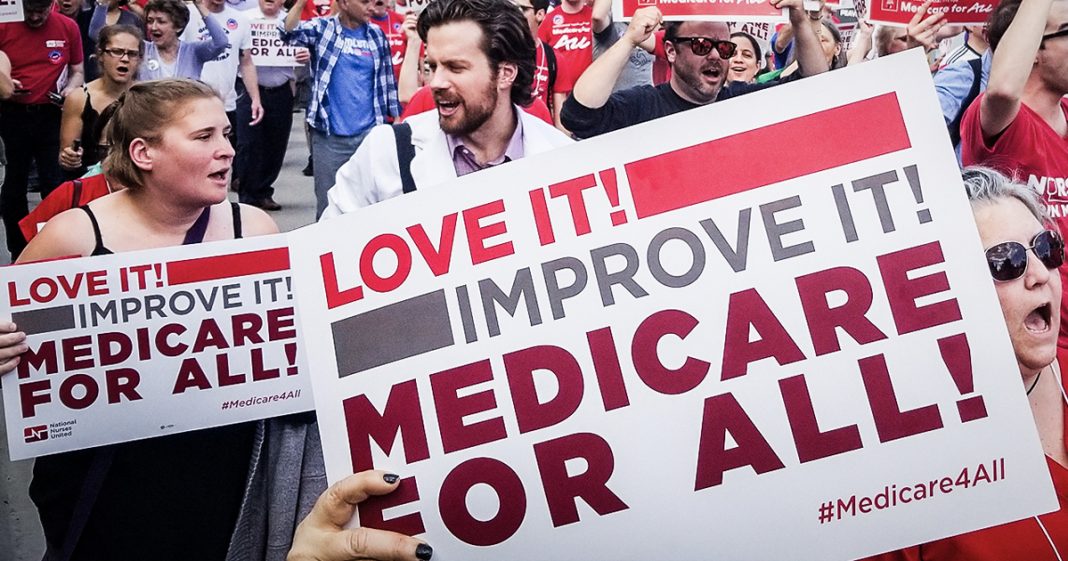 Healthcare companies have now poured in more than $47 million in the midterm races, a sign that they are growing more and more terrified of the thought of a Medicare for All healthcare system in this country that a majority of voters seem to favor. Given the overwhelming support from their voter bases, both parties will eventually have to address the issue and deliver something, and that’s why healthcare spending on campaigns is going through the roof for the midterms. Ring of Fire’s Farron Cousins discusses this.

According to a new report by the Center for Responsive Politics, the healthcare industry has pumped in more than $46 million into the Midterm races. When you factor in how much money they’ve also given to super PACs and things like that, money that then gets funneled down to candidates, they’ve actually put in more than $200 million just in the 2018 Midterm races.

This obviously begs the question: What’s going on with the healthcare companies? They always give big to politicians, they spend a lot on lobbying, but they’re spending more than ever on these particular Midterms. And there’s a very important reason why they’re doing this, and there’s also an important reason why most of their donations are going to republicans.

It’s because healthcare companies, doctors, groups, pharma companies, health insurance companies, they’re worried about two things right now. They’re worried about the polls that show that a majority of people in this country, democrats, republicans, independent, everyone supports Medicare for All. They want us to move to a Medicare for All system. That terrifies the hell out of the healthcare industry because it’s going to cut into their profits, so they’re supporting politicians, sending money to politicians, who do not support a Medicare for All system, and they believe that their money is going to be more important than the voices of the American public, again, left, right, center, and everything else who support this idea.

The second reason is because defeating Medicare for All not that hard right now. We don’t have enough people pushing for it even though again majority of the public wants it, there’s not enough politicians pushing for it to say that it’s right around the corner. Now it’s on the horizon but it’s not as close as we think. So the second big thing that healthcare companies are fighting back against is any kind of crack down and regulation on inflating drug prices here in the United States.

Again, we pay some of the highest prices for prescription drugs in the entire developed world. The reason for that is because these big pharma companies like to charge us more money because we have direct-to-consumer advertising which takes billions upon billions of dollars out of their budgets every single year. They want to recoup that money. So they charge us astronomically higher prices here in the US so they can make back that advertising budget that they spent and they can spend it again next year and make it back next year and so on and so forth.

But that’s why healthcare companies, insurance companies, doctors organizations, pharmaceuticals, that’s why they’re all pumping so much money into these Midterms. They feel the sea change happening with the American public. We all, regardless of party, support Medicare for All. We all, regardless of party, support bringing down prescription drug prices. And if we get politicians who want to push for those policies, who want to become popular with the voters and force other politicians to do the same, that spells doom for the healthcare industry that is essentially been ripping us off for decades. They’re not ready to put their cash cow out to pasture so they’re going to spend as much money as possible to keep electing pro-corporate, anti-consumer politicians, and putting them in power in Washington DC.

It may work this time, but in the long run healthcare companies understand that their days are numbered. The American people are not going to tolerate it any longer and there’s only so much that their money can do before the voices of the people drown out all of those checks that they’re handing to republican politicians.