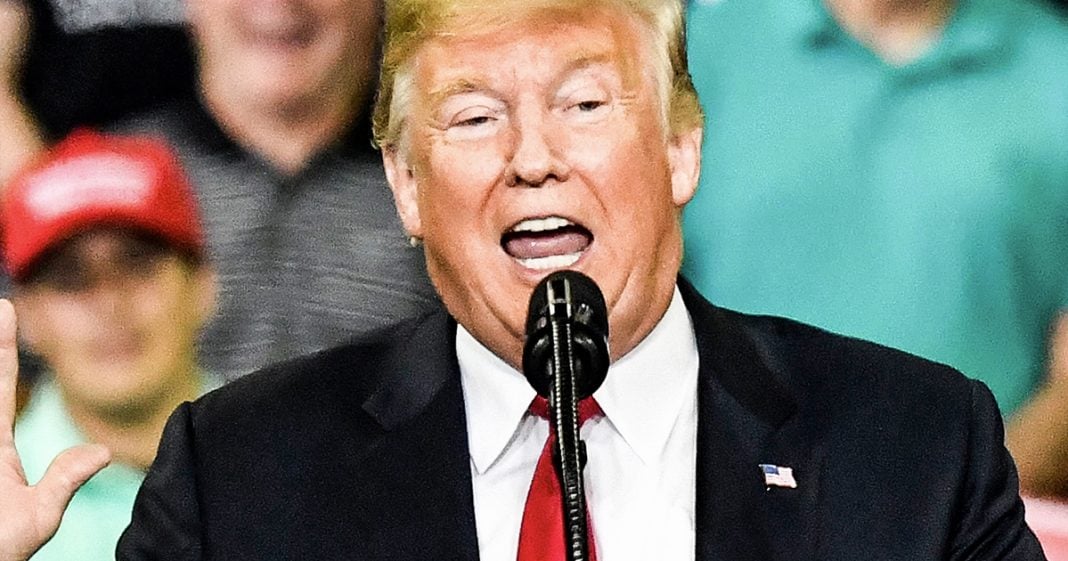 Donald Trump has been pushing a disgusting new ad warning America that Democrats want to let dangerous immigrants into our country – immigrants like the one featured in the ad who killed a police officer and showed no remorse. What Trump didn’t say is that this man was actually in the country thanks to the policies of the Bush administration and the weapon he used to kill the officer was one that Republicans refused to ban. Ring of Fire’s Farron Cousins explains what really happened.

In case you haven’t already seen it, Donald Trump is pushing a very disgusting and completely untrue political ad right now in an attempt to paint Democrats as the pro-illegal immigrant party. It’s an ad that features a man who was convicted, and is currently on death row in San Quentin Prison … He was convicted of shooting two police officers.

He was an illegal immigrant. He had been deported but he came back. And Donald Trump is hanging this on the heads of the Democrats and saying, “They support this guy. These are the kinds of people they want walking the streets of United States. They want to put us all in danger.”

This is Willie Horton 2.0 at this point. But here’s the catch, and here’s the thing Donald Trump has not been telling people. And the reason I’m not showing that ad is because I do not want to give it any more air time. It’s not running on TV. It’s only online. So fewer people will probably see it.

But here’s the thing Trump’s not saying. None of what he has said in that video is actually true. None of this is the fault of the Democrats. In fact this man first illegally came to the United States in ’90s, where he was deported by the Clinton Administration. He came back under George W. Bush, was deported, but still managed to come back again while under George W. Bush.

And during that time, Republicans let the assault rifle ban in the United States expire, which meant that guns like AR-15s were once again flowing in the streets. And them man who killed those two police officers got his hands on one of those because Republicans allowed them to be out there. And he got one and he became a cop killer, under Republican policies.

The shootings happened in 2014 which obviously, yes, that was during the Obama Administration. But again, the weapon he used was the one that Republicans refused to ban when the assault weapons ban expired in 2004 and they said, “Nah, you know what? Let’s flood the streets with these weapons of war. What’s the worst that could happen?”

Well I think we’ve seen that, and not just with this one particular person. We see it in the news once a month at at this point. We know what could happen. But Donald Trump’s dishonesty, and his hatred of non-white people, has reached new heights in the last few weeks as we approach the midterms.

He has shown us who he really is and what he really believes. This man has no problem lying through his teeth about who is responsible for what. And he refuses to ever acknowledge that the Republican party is the cause of a lot of the problems that we have in the United States today.

This lies with Republicans, and Republicans are going to continue to lie about it. The only good news, the only good news out of any of this, is the fact that most people in the United States, according to polling that came out this week, do not believe what Donald Trump is saying about immigrants.

All of this talk of the caravan, even this disgusting ad, racist ad, it’s backfiring on the GOP. And we only have a few days left to see how badly it’s really going to backfire for them.