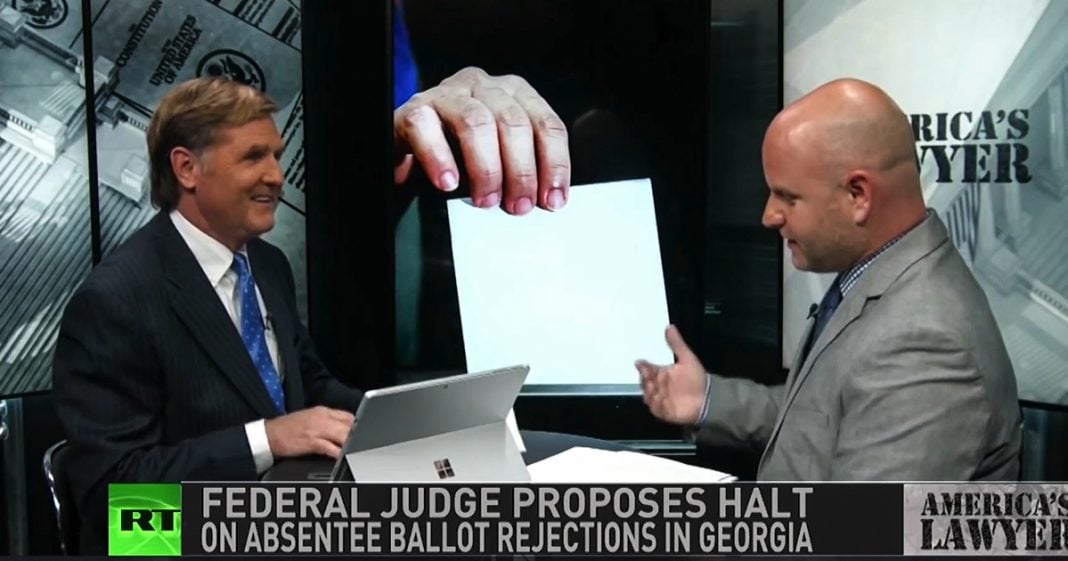 Via America’s Lawyer: A judge ruled that the state of Georgia can no longer throw out provisional ballots due to signature mismatches. Mike Papantonio is joined by Farron Cousins to discuss.

Mike Papantonio: Late last week, a judge ruled that the state of Georgia can no longer throw out provisional ballots due to signature mismatches, giving us a little hope that maybe the election process in Georgia might not be as corrupt as we thought. I don’t know. I looked at this story. Here’s what they’re doing. They’re looking at ballot A, then they’re looking at a signature by the person who signed ballot A. They’re saying, “Well, it doesn’t match perfectly, so I’m going to throw it out.” Now, these aren’t handwriting experts. These are people, you know, Billy Bob, working in the election office saying, “Well, it just doesn’t look like the same thing to me.” What’s your take on it?

Farron Cousins: What we’re seeing happen in Georgia right now is absolutely just kind of the culmination of years of everybody ignoring voter purges, voter intimidation, all of that, and this is what happens. Every time, they kind of stretch it a little bit further. This signature mismatch issue where they were throwing out hundreds and hundreds of ballots is absolutely just the next evolution of this kind of voter suppression. You got a very tight race for governor happening in Georgia right now.

Farron Cousins: There’s been a lot of people already purged from the voting rolls. But you got to take it a step further. This is, like you said, just regular people working in the office looking, “Well, is this the same? Well, it’s probably the same, but they dotted their I a little different here. So, yeah, throw it out.” But here’s the kicker. After the judge ruled you can’t throw these out anymore, you have to count them, a day or two later, the election officials came out and said, “We’ll count them, but we’ve lost them now. We’ve lost over 5,000 of them at this point.”

Farron Cousins: “And we don’t know where they are.”

Mike Papantonio: This is Florida all over again.

Farron Cousins: Yeah. It is.

Mike Papantonio: Georgia looks at what happened in Florida, what, eight years ago. They got away with it. They scammed the system. Here, I thought it was interesting. Okay, 37% of all of the ballots across the state that were thrown out, 37% came from the one county. Now, right on its face that says, “Maybe there’s a problem here.” But I think the real story here, and I love this part of the story, is that you have lawyers, organizations, the bar, for example, part of the bar organization in Georgia said, “This isn’t right. We’re going to take it head on,” and at least made it public. The argument is not that many ballots have been thrown out, but we don’t know the answer to that.

Mike Papantonio: That’s their argument. We didn’t really throw that many ballots out, so we don’t really know how bad all of this is going to affect the election process.

Farron Cousins: Right. We’re also looking at the Secretary of State, Brian Kemp, who happens to also be the Republican candidate for governor.

Farron Cousins: He also says about these lost ballots, “They’re not lost. We haven’t lost any.” Okay, well, where are they? You have to count them. “Well, they don’t exist.” There are so many conflicting stories.

Farron Cousins: But we’ve had great journalists working on it. Greg Palast working with other great organizations there in Georgia trying to create accountability.

Mike Papantonio: Hopefully, the same thing will happen in Georgia that happened in Florida. We took a real close look at it and there were some really, really ugly things taking place.