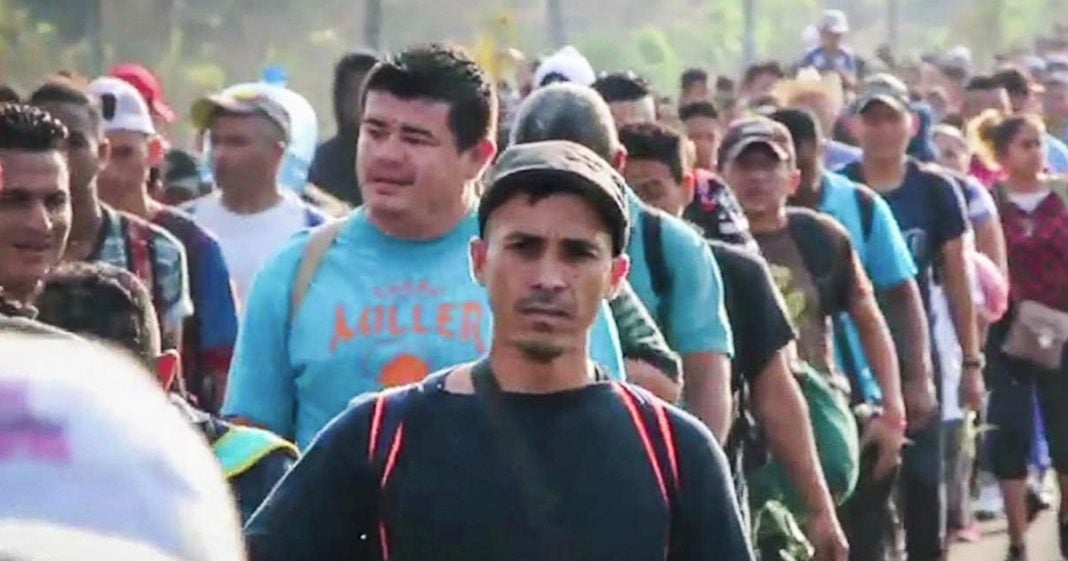 Just one week after the man was the target of an attack by a right wing fanatic, Donald Trump told reporters that George Soros might actually be the one funding the migrant caravan that is allegedly headed to the United States. With no evidence to back up his claim, Trump insisted that “a lot of people are saying” that Soros is funding the caravan. Ring of Fire’s Farron Cousins discusses this.

Donald Trump right now is not only spreading conspiracy theories to create more fear about the caravan, but he’s also doing it in a very anti-Semitic way to a man who was just mailed a pipe bomb a week ago because of these crazy Republican conspiracies about what exactly this guy is doing. George Soros may fund a couple liberal organizations, but he’s not responsible for the entire movement. There are plenty of groups that do not get any money at all, in spite of years of begging from George Soros.

But nonetheless, he’s a prominent, very wealthy, very powerful Jewish person. And Donald Trump cannot hold himself back from dragging his name further into the mud and at the same time, creating more fear about this caravan. Now, no matter what you think about these people coming to the United States, let’s get a couple things clear. First and foremost, there’s absolutely no evidence whatsoever to suggest that George Soros is funding these people. In fact, it takes an incredible leap of faith to think that something like that would even be possible.

Second, Donald Trump’s claim that there’s ISIS members in there. Yeah, there’s no proof of that at all. Gang members, still no evidence to back up those claims either. Trump is lying about what kind of a threat this actually is. But that’s not going to stop him from spending $50 million to send more than 10,000 troops down to our Southern border to fight back these mostly women and children fleeing violence in their home country. What they’re doing is not illegal. This is 100% allowed under both US law and International law. There is nothing wrong with what these people are doing, and yet Donald Trump needs a win before the midterms. And so he’s demonizing George Soros trying to paint the caravan as a Democratic plot, I guess to overthrow the country. I don’t know, nobody’s ever gone that far to explain why George Soros would be funding this. What does he have to gain from it?

And that’s probably one of the dumbest parts of it is that there’s no motive whatsoever. That’s why no intelligent person even takes that theory seriously. But we know what Trump is doing here. He’s trying to drum up a little more anti-immigrant fear before the midterms. So it’s pretty safe to assume that once those midterms are over, assuming they go the way Donald Trump wants them to, that might actually be the last that we hear of this alleged migrant caravan barreling towards the United States.