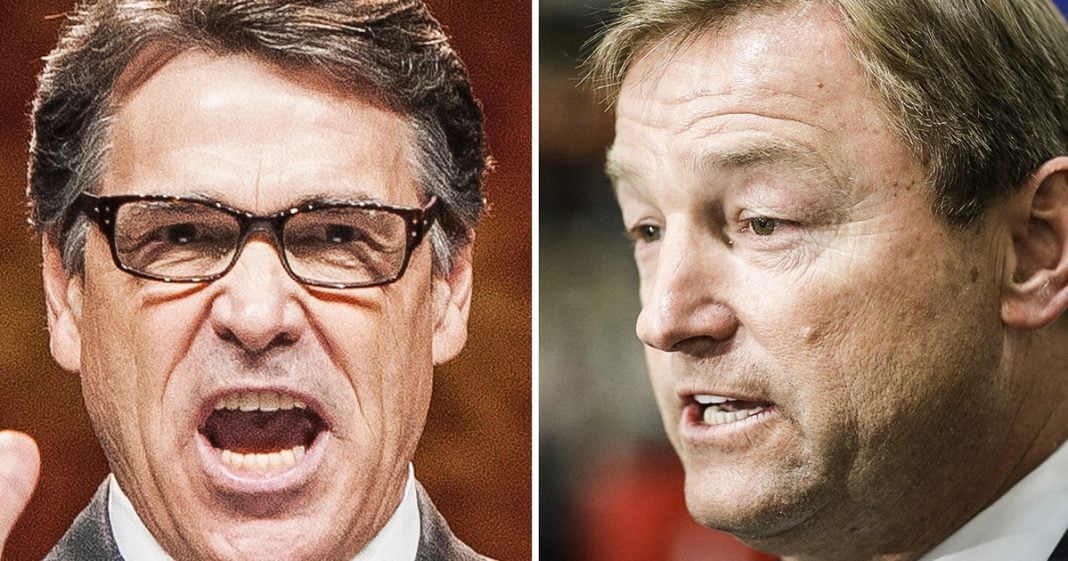 Donald Trump said recently that his administration would consider putting the brakes on a planned nuclear waste site in Nevada, but apparently no one told Energy Secretary Rick Perry about the plan. Last Friday, Perry said that the administration was still planning on storing nuclear waste at the Yucca Mountain disposal site, an admission that could easily destroy the chances of Republican Senator Dean Heller’s reelection campaign. Ring of Fire’s Farron Cousins discusses this.

Recently Donald Trump went to Nevada to help Dean Heller, republican senator’s campaign for reelection, and during their little visit they traveled to a couple parts of the State where Donald Trump promised Dean Heller that the Yucca Mountain Nuclear Waste Disposal site probably wasn’t going to happen.

Now in case you’re not familiar with the history of this let me give it to you briefly. In 1986 Ronald Regan said “We’re going to consolidate all of the high risk nuclear waste in the United States at this place down in Nevada called Yucca Mountain.” Which happens to be about 90 miles from Las Vegas and other heavily populated areas. Now at the time Regan decided this there was only about a million total people living in Nevada. Obviously the population has skyrocketed since then.

George W. Bush in the early 2000s re-designated Yucca Mountain and then in ’06 he said, “You know what, we’re fast tracking it, we’re funding it, it’s going to be fully operational for all of this toxic highly hazardous nuclear waste by 2017.” So far it has not come to fruition and Donald Trump told Dean Heller that it’s probably not ever going to happen.

Now the reason he did that and the reason Heller got so excited about it is because the citizens of Nevada obviously don’t want a massive mountain essentially of toxic nuclear waste in their state. Who would? So Trump makes this promise. Heller campaigns on it, everything is great.

Until last Friday, when what is possible the dumbest member of Donald Trump’s cabinet said, “Oh no, Yucca Mountain is absolutely happening, I’ve got the budget papers, we’ve already appropriated the money for it.” Here we go.

So Rick Perry, the guy who couldn’t even remember which branches of the government he wanted to destroy, he came out blew Donald Trump’s cover and said, “Yeah, we’re totally building this massive nuclear waste site down there in Nevada and we’ve already appropriated the money for it. This is happening.”

Obviously now Dean Heller is super made because he didn’t think he was going to have to deal with this. The voter’s in the state now understand that Donald Trump was lying to Heller and then Heller inadvertently lied to them about it. Now they’re pissed off. So, Rick Perry, may have just single handedly handed this election to Heller’s democratic challenger Jacky Rosen. Just by accidentally telling the truth.