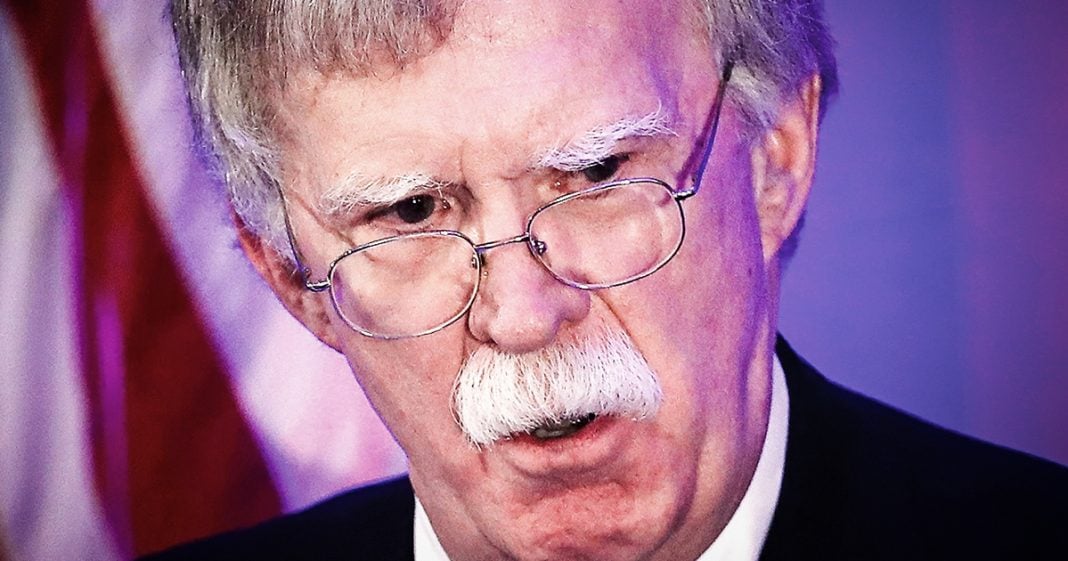 Donald Trump’s national security advisor John Bolton has been a major player in Washington, D.C. since the first Bush administration in the late 1980’s, but now he says that things have changed too much. Specifically, Bolton was referring to the “ethics checks” that government employees now have to go through which is making it harder to get people to want to work for the White House. Maybe the administration shouldn’t be trying to hire horrible people? Ring of Fire’s Farron Cousins discusses this.

Donald Trump’s National Security Advisor John Bolton is mad as hell, but this time it’s not because he’s not allowed to go start a war for absolutely no reason in the Middle East. It’s because of all of these watchdog agencies, and these inspector generals, and all of these ethics laws in place that are making his life in D.C. just absolutely no fun at all. In a speech earlier this week to the Hamilton Society, John Bolton actually attacked ethics laws in Washington, D.C. from members of the Trump Administration, or any administration, saying that they were making it too hard to get jobs done. You know, because you have to follow ethics laws, you’re unable to actually do your job, according to John Bolton.

Here’s his actual quote. This is what he said: “Things have gotten more bureaucratic, harder to get things done. If you were designing a system to discourage people from coming into government, you would do it this way. That risks building up a priestly class. It’s really depressing to see.” It’s depressing that these ethics laws are keeping people that Bolton wants in government out of government jobs. Here’s an idea, Bolton. Maybe make some friends who aren’t constantly violating ethics laws. Maybe go out there and meet some decent human beings for a change instead of the criminals you’ve been palling around with since you came to D.C. in the 1980s.

We all know your history. We know the history of the Project for a New American Century, but once you started getting a little heat on that, you disbanded it and just formed it under a new name. We know what you’re all about. You’re all about creating war, creating conflict, and profiting off of it. You are so filled with hate that you don’t care who you go overseas and bomb. You don’t care if it hits civilians. You just want to see death, and destruction, and bombs, and tanks, and planes, and everything else that defense contractors want to sell to you. Ethics rules are not the problem. The problem is that guys like you have no ethics, and you clearly don’t even know anybody who possesses any form of ethics in them. That’s why you’re upset. You’re upset that you now have to play by the rules.

You know, yeah, things were a little bit more lawless during the Reagan Administration. I mean, let’s not forget Iran-Contra, which would certainly, if it happened today, lead to an impeachment and multiple prison sentences for more than just a handful of people. Those are the days you miss, the days you could escape scrutiny, the days you could get away with anything. Well, even under the Trump Administration, people are being held accountable. What happened to Ryan Zinke earlier this week, being referred to the DOJ for possible criminal investigation, is proof of that. The multiple times that Kellyanne Conway has been found to be in violation of the Hatch Act is proof of that. The investigations into Pruitt, Carson, DeVos, Nikki Haley, Steve Mnuchin, all of them, show that no matter how lawless you wish it were in Washington, D.C., there are still enough people present to hold those in power accountable when they repeatedly break the law.