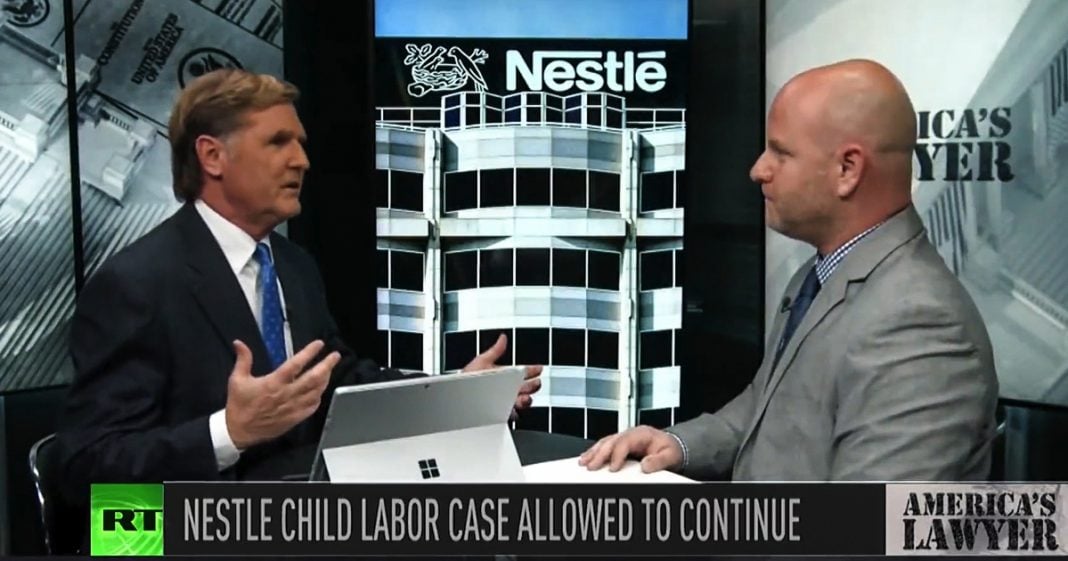 Mike Papantonio: The Nestle Corporation has been accused of using slave labor all over the globe, but as the largest food maker and distributor on earth, they’ve managed to use their power to escape the consequences of their actions for decades. All of that could come to an end very soon as the Ninth Circuit recently ruled that the company can be sued on US soil for the use of slave labor abroad. Joining me to talk a bit about that is Farron Cousins. We’re going to talk about that and other stories of the week. You and I have done so many stories on Nestle over the year, whether they’re stealing money, stealing water from California, slave labor issues. We’ve seen these types of stories arise with them all the time. You know, for a company that makes candy, this is a pretty awful bunch of folks, isn’t it?

Farron Cousins: They truly are. There’s nothing sweet about this company, that’s for sure. This slave labor ruling is actually, this case was filed back in 2005, had been thrown out repeatedly by every court. Supreme Court ruled about a year and a half ago they weren’t going to touch it, but they finally refiled it on new grounds and basically said, “Listen, we know it didn’t happen on US soil.” Because that’s what every, all the other courts were saying. It didn’t happen on US soil. It didn’t touch US soil or our any place we were interested in. They said, “Well, listen, the decision to use slave labor was made in the United States, made at their headquarters here in the US, so how can you say this doesn’t affect it?” The Ninth Circuit unanimously said, “You know what? You’re absolutely right. This decision was made in the US. It affected the US. You’re going to trial.”

Mike Papantonio: Right. Okay, let me put some legal analysis to this, okay? First of all, the appellate courts that ruled against the claimants in this case clearly did not understand that there was a very good test. The test was, does the conduct of the company in any way touch or concern territory in the United States, right? I mean that’s, you start off by saying, what the company did, does it have any impact? Does it touch the United States in any kind of way or the US Territory in any kind of way? Well, this clearly did, okay? Because here you have Nestle and they’re able to get slave labor and that affects competition. If competition is doing it right and they’re not using children as slaves, it affects their ability to set a price in a different kind of way.

The economic argument alone was enough to give these other appellate courts that really just absolutely made a horrendous mistake in dismissing these cases. Finally, now there is a shot at Nestle. Nestle says, this is almost black humor. This is the sign of a real sociopath. This is a company. Nestle comes out and says, “Oh, gee. By suing us, you’re actually interfering with our ability to stop slave labor around the world.” They actually said that. That was a quote from Nestle. That’s the sign of a real sociopath. What’s your take?

Farron Cousins: Well, this is not the first time that Nestle has been accused and evidence has emerged that they’ve been using slave labor overseas for years. They own the Purina brand of cat and dog foods.

Farron Cousins: They’ve been using slave labor and they know this because they’ve looked into it. They’ve been using slave labor over in Thailand in the fishing industry. What they did there, this was more of indentured servitude. They gave people huge loans, took poor people out of Myanmar and other countries close to Thailand, brought them to Thailand, gave them huge loans to buy fishing boats and fishing equipment. You’re now an employee of Nestle, but you owe us so much money that what we pay you comes right back to us and there’s nothing you can do to break this cycle or you go to jail. They’ve already been guilty of that. That one, when they found out that that was happening, they said, “Whoa, that’s bad. We’re going to look into it, but keep in mind that all the other companies are doing this over there, too, so it’s not just us.”

Mike Papantonio: Yeah, I mean, that was their argument.

Mike Papantonio: That literally was their argument. “Other people are taking advantage of other people through slavery as well, so why are you picking on us?” That’s one argument and then, while they’re making that argument they’re saying, “We’re really leaders around the world in trying to solve the slave labor issue, so these plaintiffs who are suing us and have been suing use since 2005, these plaintiffs are really doing harm to the slave labor market around the world by suing us.” Go figure.