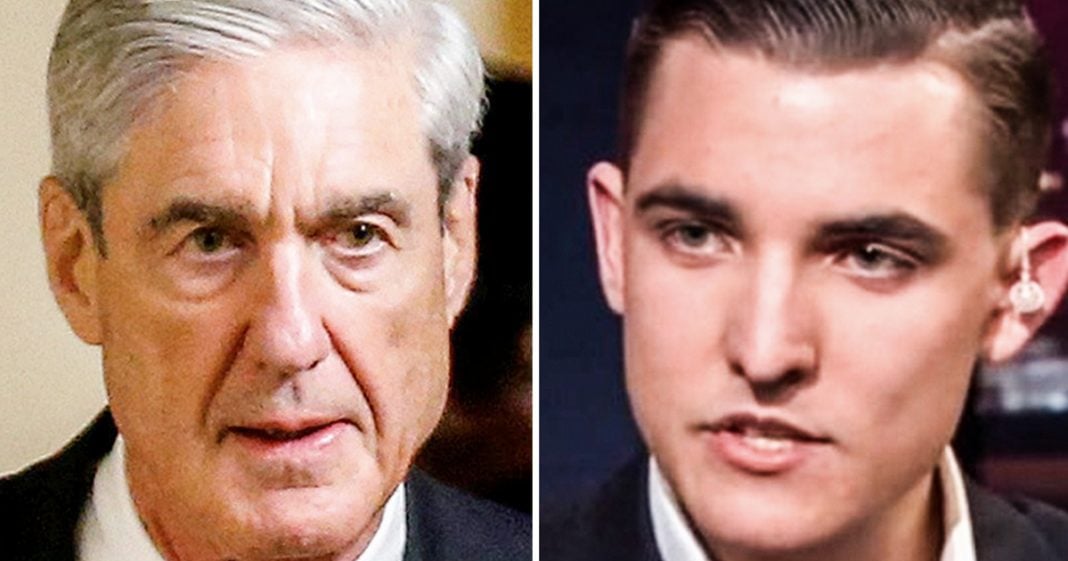 If you’ve ever looked at the comments on a Trump Tweet then you’re probably familiar with a young man named Jacob Wohl. Wohl has been an ardent Trump supporter, and he’s also been no stranger to fraud and corruption, having been banned from the financial sector for misconduct before the age of 21. Well now Wohl has been busted again, this time for creating a fake company to push a fake story about Robert Mueller. Ring of Fire’s Farron Cousins has the details.

I imagine that a lot of people had to spend their Tuesday evening trying to look up who exactly Jacob Wohl is, and for those of us who follow Donald Trump on Twitter and like to make the horrible decision to look through the replies to his Twitter feed, we already knew who Jacob Wohl was. He is the disgraced former, current, whatever, hedge fund manager who’s actually been banned from the financial sector over his activity.

But he likes to comment on every single post that Donald Trump sends out on Twitter. Usually repeatedly expressing his undying love for Donald Trump. The reason people were looking up who Jacob Wohl was, is because Jacob Wohl has now been busted as the … I hate to even call him this, master mind behind this plot to discredit Robert Mueller by attempting to bribe a women to say that Mueller sexually assaulted her back in 1973 when the two of them worked at a law firm together.

Now, Mueller actually got wind of this last week and referred it to the FBI for investigation, because the woman started calling media outlets saying, “Hey, there’s some guy offering me money to say that Robert Mueller sexually assaulted me several decades ago. I don’t know what to do so I’m calling the media. Could somebody maybe look into this? This is very weird.”

The woman who is named only Lorraine in the stories, the idea by this group called SureFire Intelligence was to have her come out and say again Robert Mueller assaulted her back in 1973 when they worked at a law firm together. So, immediately reporters and internet sleuths called the law firm and they said, “We have no record of anyone named Lorraine working here at that time at all.” Furthermore, on the specific date that she was supposed to claim that the assault happened Robert Mueller was actually in a different part of the country serving jury duty.

So, immediately that story fell apart. They weren’t even in the same state on the time that, that allegedly happened, but that doesn’t matter because the plot was just to discredit him, and that is exactly what Jacob Wohl was trying to do. And how do we know it was Jacob Wohl that did this? Well, because the kid’s an idiot.

He decided to register the domain name for SureFire Intelligence, the group that was putting out these documents showing that the assault happened. He registered it with his own email address, which by the way is jacob.wohl@nextmanagement.com in case anybody needed to know that. It’s actually … It’s listed on the document so you could have found it. I’m sure everybody’s already seen it by this point, and I’m sure he’s changed it by this point, because he probably needs to go ahead and do that.

The conspiracy theory was also pushed by a man named Jack Burkman. A conservative radio host, a guy I thought actually disappeared years ago after he was popped several times for soliciting sex from prostitutes. I don’t know that he ever actually got arrested for it, but plenty of sex workers came forward and said, “Yeah, Jack Burkman gave me his card.” They actually showed his card. So, this guy had some serious problems.

He also showed up on the DC Madam’s list. So yeah, this was a guy, he loves paying for sex and he was also neck deep in this plot with Jacob Wohl. And it gets even more absurd from there. I’m going to read you just this list from Business Insider of all of the crazy things that people found out about SureFire Intelligence, Jacob Wohl, and this entire plot to discredit Mueller. Here it is. SureFire’s official phone number goes to Jacob Wohl’s mothers voicemail. So, he sets up this fake company and he has to put in a phone number, he obviously can’t put in his phone number so he put in his mommy’s phone number. They called it and it went to her voicemail. Wow.

Wohl’s email is listed in the domain records for SureFire’s website. The official … The office, excuse me, SureFire listed as it’s address is in fact occupied by a law firm that actually has nothing to do with them. An LLC with the companies name was incorporated just a few weeks ago. The LinkedIn profiles for several supposed SureFire employees are actually just photos of other people, including model Bar Refaeli, and actor Christoper Wallace. And the managing partner for SureFire on LinkedIn is actually just a darkened up photo of Jacob Wohl himself.

The Gateway Pundit, that conservative website had said earlier this week that they were going to post these documents, and they’ve posted some of them showing that Robert Mueller is in fact a sexual predator. And it turns out those documents were actually created by SureFire. They were heavily redacted so you couldn’t even read them all, but they were completely fabricated. The woman admits people tried to pay her to say these things. The entire story has fallen apart, the whole thing’s been referred by Mueller to the FBI to investigate, and it’s likely that Jacob Wohl, Jack Burkman, and possibly even some folks at the Gateway Pundit are going to end up going to prison for obstruction of justice.

That’s what’s at the heart of this. They wanted to discredit Mueller, they wanted to end the probe because they want to protect Donald Trump. And by doing this, by engaging in this conspiracy, which is what it is at this point, they are all looking at very hefty prison sentences, and it’s not going to take a genius working to put all the pieces together, because luckily internet sleuths and reporters have already put all of the pieces together for the FBI.