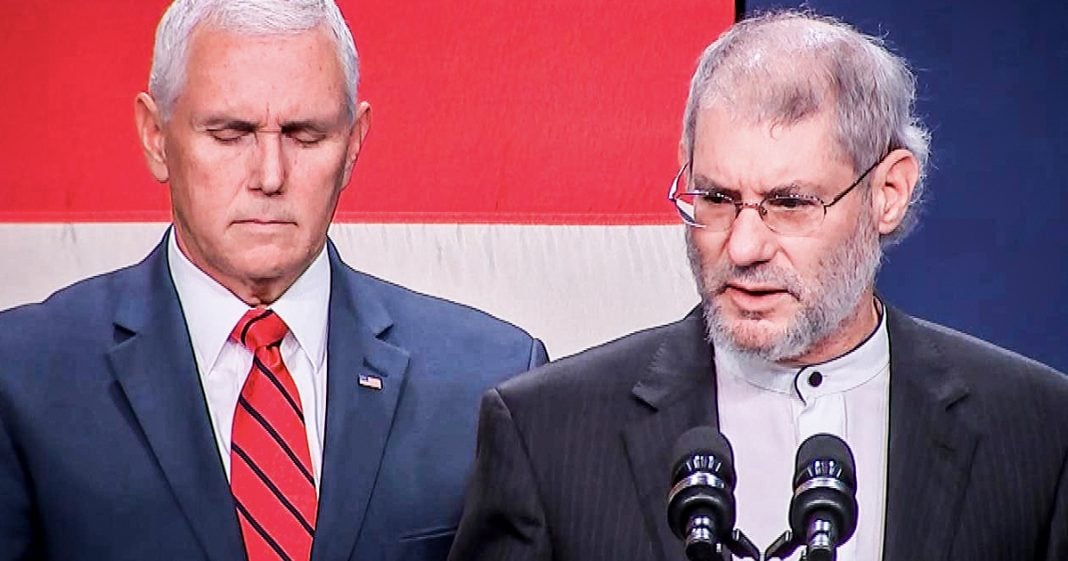 Mike Pence just can’t accept people who have a different religion, so when it came time for him this week to mourn the recent victims of the shooting at a Synagogue, he was paired with a Jewish Rabbi who believes that Jews who don’t accept Jesus Christ as their savior are going to hell. This move adds insult to injury for the victims in Pennsylvania, as Ring of Fire’s Farron Cousins explains.

On Tuesday this week, Mike Pence actually went to Michigan to pray for the victims of the shooting that took place in a synagogue in Pennsylvania this past weekend. He brought along, or I should say, someone was brought along for him, to help him pray for those victims. And of course, obviously, victims of a synagogue, you want to be sensitive to the religion. They brought in a rabbi to go up there with Mike Pence. Good call, except it wasn’t.

The person they brought in wasn’t actually a rabbi, had never been ordained by any Jewish synagogue, other rabbis, any official from the Jewish religion. So, this guy wasn’t even a real rabbi. Furthermore, the guy standing next to Pence on that stage, offering this prayer, which was actually just a prayer for Republicans to get elected in November, he is a Jewish person. He’s one of the Jews for Jesus, and he believes that any Jew that does not accept Jesus Christ as the Messiah is going straight to hell. So, out of all of the rabbis Mike Pence could have stood on the stage with, that Republican handlers and the Republican candidate who actually brought that pastor there, they picked the one who thinks that Jews are going to hell and who’s not even an actual rabbi.

I mean, this is literally an instance of adding insult to injury for the victims at that synagogue. Furthermore, as I previously mentioned, this guy barely spent a minute talking about the victims, and instead offered most of his prayers to Republicans in the state of Michigan, I believe nine different Republicans he focused on in his prayers, praying that they would win their elections in the midterms. We’ve just had a horrible tragedy take place on American soil that capped off a week of tragedies happening here in the United States, and Mike Pence, that uber false religious zealot, stood up on stage with a man whose very presence insulted the victims of that shooting, and thought that this was perfectly acceptable.

Mike Pence is such a hard-core fanatic about his religion, but only in theory, obviously not in practice at all, that he couldn’t even stand to be up there with a real rabbi. He had to be up there with one who shares his beliefs almost to a tee. Mike Pence is far more disgusting than I think he gets credit for, because obviously, Trump, a little bit more disgusting than Mike Pence. But make no mistake about it. Donald Trump may be the most disgusting person in this administration, but Mike Pence is not too far behind him, and his little stunt in Michigan on Tuesday proves that.