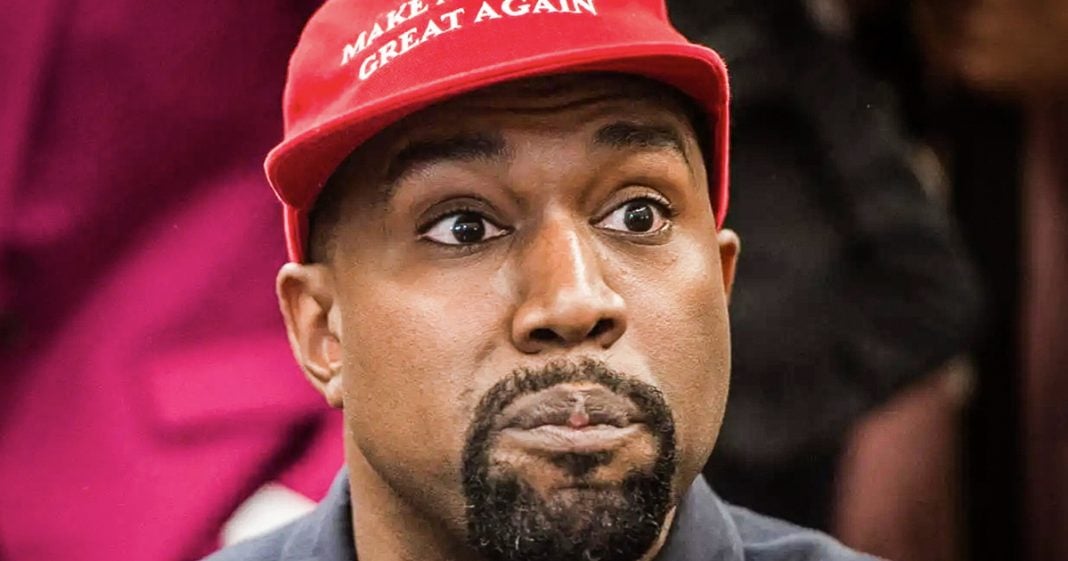 The love affair between Donald Trump and Kanye West might already be over, as Kanye issued a series of Tweets on Tuesday saying that he was being used to spread messages that he doesn’t believe in. He was specifically referring to the “Blexit” T-shirts being pushed by conservative commentator Candace Owens, but the attack extends far beyond Owens and her shirts. Ring of Fire’s Farron Cousins discusses this.

Well, keeping with the theme of absolutely stupid news stories that seem to be popping up every couple of days, I felt it necessary to talk about the fact that Kanye West is apparently breaking up with Donald Trump and the Republican party. Yesterday, Kanye West tweeted out the following, in a series of two tweets here.

It says, “I introduced Candace to the person who made the logo and they didn’t want their name on it, so she used mine. I never wanted any association with Blexit. I have nothing to do with it. My eyes are now wide open and now realize I’ve been used to spread messages I don’t believe in. I am distancing myself from politics and completely focusing on being creative.”

Now, the issue here is that Candace Owens, right wing commentator and the communications director for Turning Point USA, they created these shirts for Blexit. In case you haven’t heard of Blexit … Oh God, what a horrible name to even say, just hits the ear wrong. But Blexit is supposed to be blacks exiting the Democratic Party. It’s a take on Brexit from the United Kingdom there.

Candace Owens, African American herself, has been this person who kind of spearheaded this. Kanye West met her not long ago, introduced her to this person to make the shirts, but like he pointed out, none of them wanted to put their names on it, so he slapped his name on it to promote this message that, hey, African Americans leave the Democratic Party because you’re a slave to them. Come over to the Republican Party and help us fight to preserve these Civil War monuments and the Confederate flag, because that’s totally not racist at all. Right?

Yeah. It’s one of the dumbest movements ever run by one of the dumbest political operatives ever, but that’s what we’ve seen from Turning Point. They just keep turning out stupid people, and Kanye West has absolutely been a tool for both Turning Point and for Donald Trump, and now it appears he’s woken up to that, or maybe he’s starting to lose a little bit of money over his undying support for Donald Trump.

In the last couple weeks, ever since he sat down with Donald Trump and did his little hosting gig on Saturday Night Live, he’s been losing people, specifically other celebrities that want nothing to do with him, because he’s blindly throwing his support behind such a horrible human being. Also, part of the fact, he wanted the Amendment, the 13th Amendment that abolished slavery, he actually called for abolishing that Amendment, which was pretty weird. I mean, very weird actually, but it’s something he said, probably not knowing exactly what he was even talking about, but Kanye is tired of it. He is tired of being used by these people, and so he’s backing away from politics.

Personally, I don’t care. If he wants to talk about politics all day, every single day, go for it. You have a right to do it. Be who you want to be, but right now I think Kanye has realized that the popularity he got from that is starting to wear off and actually starting to go in reverse. He has nothing left to gain from aligning himself with these Republican organizations, and that’s why he’s backing off.

He hasn’t had a change of heart. I don’t even know that he had a change of heart when he decided to start backing Republicans. I mean, this is a guy, let’s not forget, after Hurricane Katrina went on TV and said, “George Bush doesn’t care about black people, a statement that’s still true today for the Republican Party.” Kanye was seeking publicity and he got it. That is all that he wanted to do, and now that he realizes he’s tapped that well dry, he’s going to move onto the next thing that he thinks will give them an additional 15 minutes of fame.