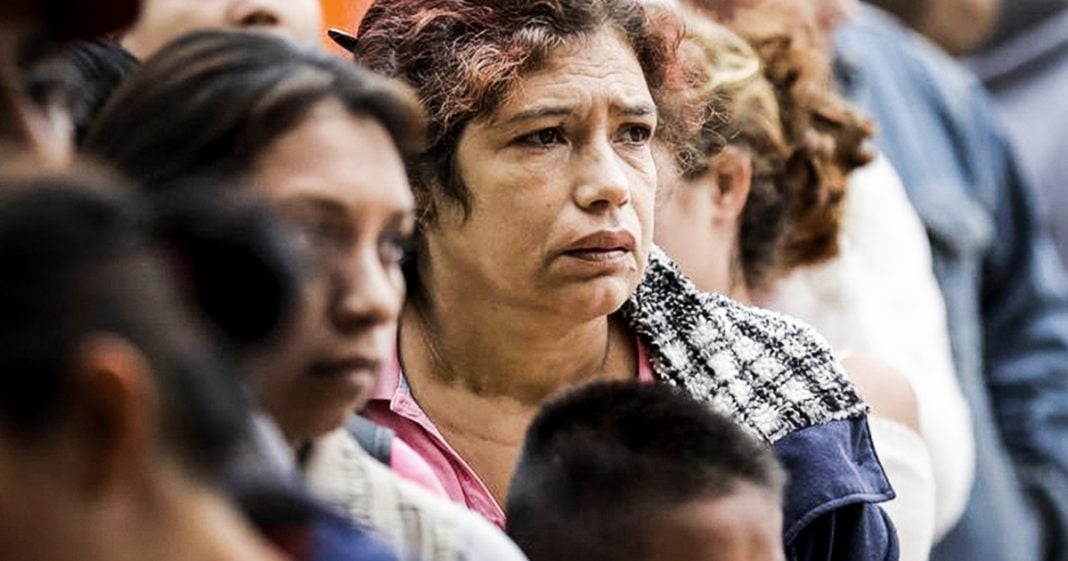 The caravan of migrants seeking asylum might still be more than 1,000 miles away, but that hasn’t stopped Donald Trump and the Republicans from acting like these people present an imminent threat to the United States. In order to bolster the GOP’s chances in the midterms, Trump has announced that he is sending 5,200 armed US troops down to the border to fight back the caravan, assuming it even makes it to the United States. Ring of Fire’s Farron Cousins discusses the motivation behind this and the reality of our immigration laws.

The Trump administration has announced that they’re going to be sending at least 5,200 armed U.S. troops to our southern border to apparently fight back against this migrant caravan that is barreling towards the United States. Some reports show that they actually might be sending more than 7,000 U.S. troops down to the border, which is actually more people than are currently in the actual caravan. Here’s the thing. We all know why the administration is doing this. Why they’re trying to make this a top talking point. Even Shepherd Smith on Fox News had enough good sense to point it out yesterday. This is all about the midterms. This is all about appearance. We know that these migrants, those rational ones among us, know that these migrants are not coming here to steal our jobs, to kill us, to rape us, or to give us infectious diseases, which is actually the new Fox News talking point. This morning they had a guest on that said, “They might be bringing leprosy to the United States.” Tucker Carlson two nights ago said, “Oh, they’re bringing all these other diseases in. You know we can’t let them in.”

They’re talking points are growing more absurd because fewer and fewer people in this country are buying into them, but let’s get one thing straight about these migrants coming here. They haven’t done anything illegal yet. There’s no evidence that any of them are ISIS or drug dealers or gang members as Donald Trump has said. He even admitted he didn’t have evidence to back that up. He just says things to see if they stick. Coming to the United States to seek asylum is legal. We have a process for that. And in fact, the last time we were warned about these migrant caravans coming, which was last April, nearly all of them actually came and went through the legal asylum process. Only 122 of them were caught illegally trying to cross the border, which by the way still just a misdemeanor here in the United States. Same thing’s going to happen here. Mexico is already considering offering some of them asylum, which is going to deplete their numbers a little bit. Some of them have agreed to turn back. We’re not going to get thousands upon thousands upon thousands of people coming to the U.S. border trying to overtake it. Rational people understand that.

The problem is we have a party that is built on being irrational, the Republicans. We saw that last week when one of the people at the Trump rally, I believe up in Michigan or Minnesota, was like, “Yeah, the migrants are going to come all the way from Honduras walking all the way, and they’re going to come up and take all the lake property,” up there in Minnesota or Michigan or wherever it was. You know, basically close to the Canadian border. They’re going to walk all that way just to take that lakefront property from this one specific woman at the Trump rally. That’s their plan. That’s the master plan of the caravan to go take that one woman’s lakefront view. No. Not to mention the fact the that they’re still at least what a thousand miles away and average walking speed for humans I think is like 2.7 miles per hour, not to mention most of them are children, so they’re not even walking that fast. We’re weeks, weeks, weeks away from any of them even making it to our border assuming they decide to even come that far, but nonetheless, this administration wants to send armed guards down there to the border.

Last week Department of Homeland Security Chief Kirstjen Nielsen actually said she’s not above shooting them if they come here, then immediately said, “I never said we should shoot them,” even though she had literally just said in an interview, “They might get shot.” This whole thing is crazy, and this whole thing is meant to drum up more Republican support, get them energized ahead of the midterms. These migrants have done nothing wrong. Nothing. What they’re doing is not illegal, and to be honest this actually happens pretty much every single year. Past presidents have had to deal with it, and they dealt with it peacefully without sending thousands of armed troops down to the border. Donald Trump is doing this for political gain. The voters, most of them Republican, just need to be smart enough to understand that they’re getting played by an expert con man with this issue.