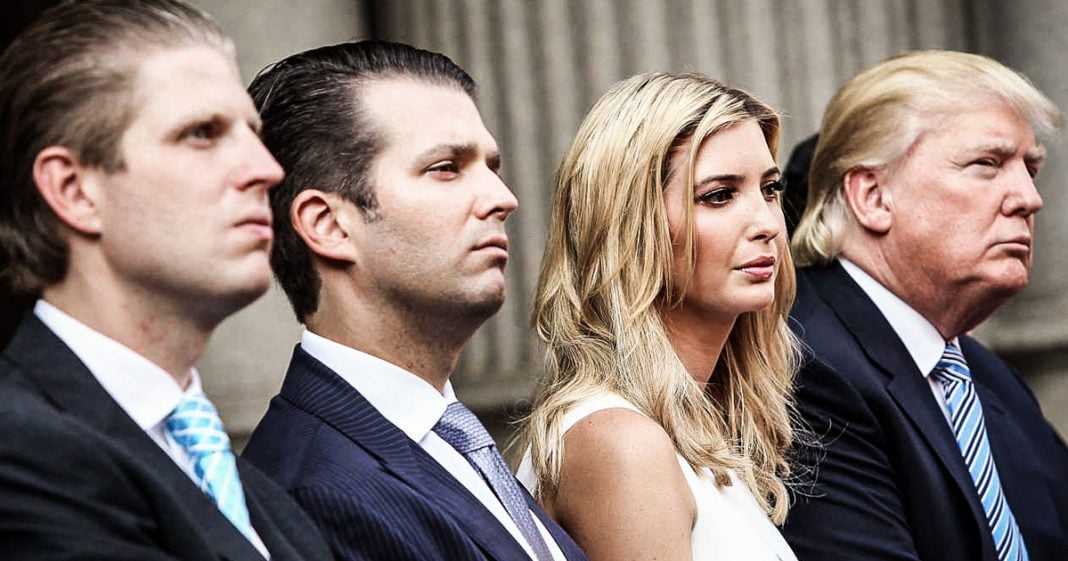 The Trump family and Organization has been sued in Manhattan for allegedly defrauding investors in order to get them to invest in a pyramid scheme that the Trump’s were a part of. They preyed on the poor and the naïve, convincing them to invest in a shoddy telecom company that turned out to be a pyramid operation, but that didn’t stop Trump and his kids from telling others that it was a great investment. Ring of Fire’s Farron Cousins discusses this.

Well folks, another day, another lawsuit against Donald Trump and his children. On Monday, it was announced that a lawsuit has been filed in a Manhattan Federal Court against Donald Trump, the Trump Organization, as well as Eric, Don, Jr., and Ivanka, for allegedly defrauding investors and engaging in a conspiracy, a RICO, racketeering conspiracy to defraud poor people by pushing them into a pyramid scheme.

Here’s what happened in a nutshell. There’s a massive report about it. I’ll try to condense it as much as possible. Donald Trump had been promoting this company, ACN. He had promoted it on The Apprentice, he had done speeches talking about how great they were, and then he started talking to people and his kids were talking to people trying to get them to start their own little ACN branch. All they had to do was pay $499, and then they would be able to go out and recruit other people who would also then need to pay $499. You start your own small business for ACN, and you have all these people working for you, and then they can go and get people working for them for $499 if you’re willing to pay it. It was a pyramid scheme, but Donald Trump told these people that this was a safe investment, that he had done his “due diligence” researching them, that he knew them very well, and that it was very safe and these people were going to make a lot of money.

It turns out none of them made any money, and most of these people were low income Americans seeking to do something better, make a better life for themselves, had to scrape by and borrow the $499 just to buy into this pyramid scheme because you had this billionaire, Donald Trump, and his billionaire kids telling them that they too could be like us if you just buy into this pyramid scheme. The Trump family knew it was a pyramid scheme. They knew these people would lose money, but as long as they were out there pushing it, getting more and more people to buy in, they would make a ton of money, and everybody else would lose time, money, and everything that they hoped to gain from this ACN, selling phone service over the phone business Trump was pushing.

Now, none of this is surprising. We have seen report after report after report about the Trump family engaging in potentially illegal activity. We have had reports of Ivanka Trump and Donald Trump, Jr. defrauding investors by lying about how many units had sold in a particular building. That happened in multiple different buildings that they were trying to sell and get people to invest in. This is how this family operates, by conning people, by lying to people, and they have been able to get away with it for decades at this point because nobody bothered to look into it. We had plenty of regulators in the State of New York who knew this was happening, and now reports have even come out that Donald Trump and his lawyers managed to basically buy these people off and end investigations into the Trump family. There’s now an investigation into that as well.

This isn’t going to end well for the Trump family. I know Donald Trump thinks being president is fun, and you get to sit and watch TV all day and then go play golf, and then occasionally give a hate speech every now and then, but because of his new position and because of his newfound popularity, all it’s done is forced people, reporters, regulators, everyone else to kick over the rotting logs that this family has been hiding for so long and finally see exactly what kind of corruption, deceit, and decay is taking place inside of the Trump family and the Trump organization. It’s not gonna end well for anyone in that family who happens to have the last name of Trump, or for that matter, probably anyone who also has the last name of Kushner.