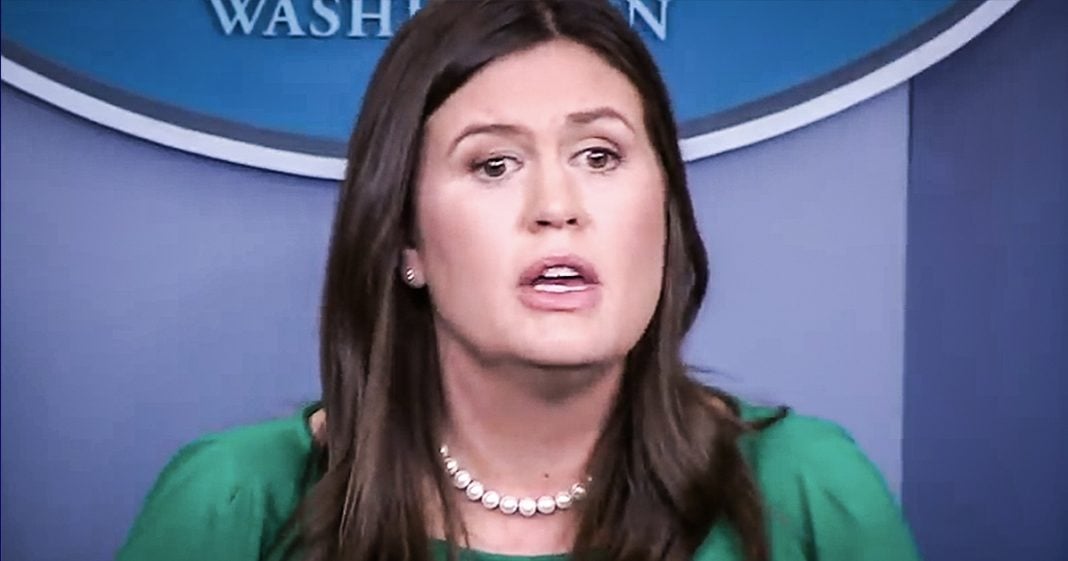 White House Press Secretary Sarah Huckabee Sanders was in no mood to deal with reporters asking about Donald Trump’s hypocrisy with regards to civility and how he treats media outlets, and after one too many questions about the subject, she went on a long tangent about how horrible the media is and then abruptly ended the press conference. Ring of Fire’s Farron Cousins discusses what happened.

On Monday, White House Press Secretary Sarah Huckabee Sanders was asked about the recent attacks that took place pretty much throughout all of last week and she was asked specifically about the president’s rhetoric that many believe fueled most if not all of these attacks.

Sarah Huckabee Sanders wasn’t having it and, in fact, got so mad after that question was asked and she went on her long yelling, rambling response that she decided to just walk out. Here’s the clip.

Reporter:
He and you have also acknowledged that, in the next breath, after he calls for unity, he does talk about division in what you described as drawing a contrast. Is he incapable of in the words of some toning it down and toning down the rhetoric?

You guys have a huge responsibility to play in the divisive nature of this country when 90% of the coverage of everything this president does is negative despite the fact that the country is doing extremely well, despite the fact that the president is delivering on exactly what he said he was going to do if elected, and he got elected by an overwhelming majority of 63 million Americans who came out and supported him and wanted to see his policies enacted. He’s delivered on that. He’s delivered on the promises he’s made, and if anything, I think it is sad and divisive the way that every single thing that comes out of the media, 90% of what comes out of the media’s mouth is negative about this president despite the fact that the economy is booming, despite the fact he said he would fix the trade deals, and he’s done exactly that.

He said he would defeat ISIS, and he has. The president has been delivering day in, day out, and I think it would be nice if every once in a while we could focus on a few of the positive things the president has done instead of just attacking him.

Thanks so much, guys. Have a great day.

All right, first and foremost, what I’m going to do is I’m not going to make fun of Sarah Huckabee Sanders for repeatedly saying, [“Despact] the fight,” instead of despite the fact. Look, I get tongue tied plenty of times as well. I know what it’s like, although you did do it two times in a row, so, come on, but, seriously, the real issue here is Sarah Huckabee Sanders is going to do anything she can to defend what the president says, how he says it and who he says it to.

Yes, Sarah, he has declared the media the enemy of the people. No, he is not just simply fighting back. He is stirring up hate, racism and division in the United States. His Twitter feed is a very clear evidence of that, and if you don’t think that his words played any role in what happened last week, then you are clearly blinded to reality. You also are part of the problem. Your constant attacks on the press even throughout that entire press conference yesterday show that you are just as bad as the president.

CNN is still receiving pipe bombs in the mail, and all of that is a direct result of you and your boss and everybody else in your administration constantly calling them fake news, constantly saying how terrible they are and how they are the enemy of the people and how they are a threat to democracy. You own this, Sarah, along with your boss. You need to understand that, but I don’t think you ever will. You’re never going to change your ways. You’re going to sit there, be a horrible human being by spewing these lies and even more hatred and division than your boss and assume that you’re going to walk away with this and still be able to find gainful employment anywhere in the United States.

It’s not going to work like that, Sarah. You have not only destroyed your personal life, your reputation, everything you’ve had by staying with the president this long and sticking by him even through the worst things that he has done. You have destroyed your entire professional career. I hope for your sake that it was worth it.