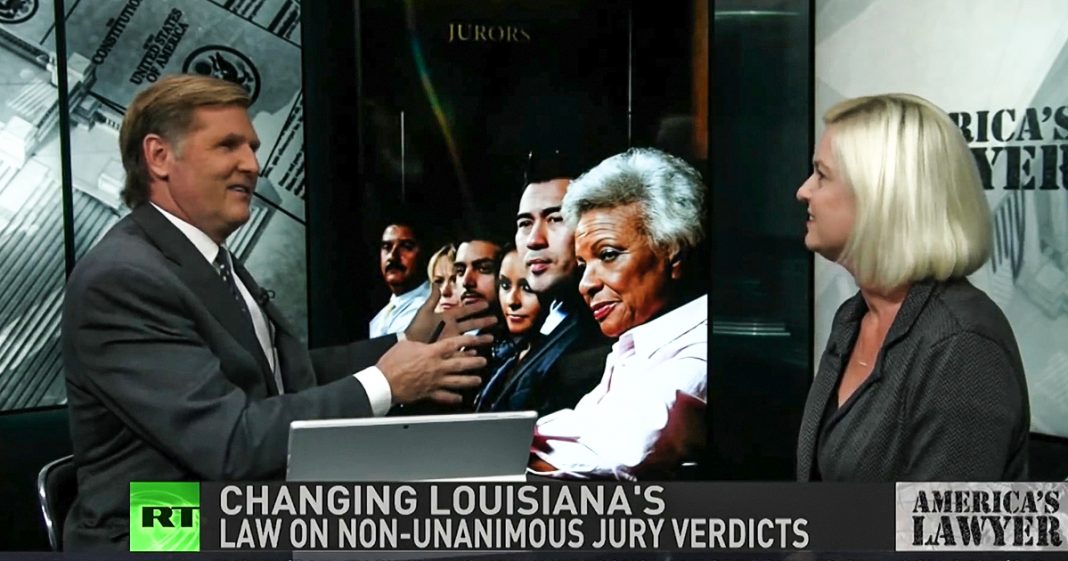 Via America’s Lawyer: Journalist Mollye Barrows joins Mike Papantonio to talk about a new vote which might abolish Louisiana’s non-unanimous vote in jurors.

Mike Papantonio: In Louisiana, you can be sent away for life even if some jurors say you are innocent. But that could change this November as this year might be the last for non-unanimous juries in Louisiana.

Joining me to talk about this Mollye Barrows, legal journalist for the Trial Lawyer magazine.

Here’s what strikes me about this case, first of all, if the conviction standard is beyond a reasonable doubt, okay?

Mike Papantonio: That’s where we start, beyond reasonable doubt. So, if you have two jurors on a panel that they aren’t convinced, doesn’t that kind of say you haven’t gotten there? What’s your take?

Mollye Barrows: No, you’re exactly right. And that what advocates who want to reverse this law, that’s exactly the point that they are making. You can’t have reasonable doubt, you can’t convict beyond a reasonable doubt when you have reasonable doubt. Clearly, that’s why there are only two states that don’t have laws that require unanimity among jurors.

Mike Papantonio: Well, I mean, it seems to me that this is really kind of a holdover of kind of that old Louisiana law, 100 year old law.

Mike Papantonio: It’s really, you know, when I studied this back in law school, the question always reminded me, it was kind of the remnant of the Jim Crow era, wasn’t it?

Mollye Barrows: Yes. Yes, and the more I learn about this Jim Crow era, it’s just horrific. It’s a terrible display of racism in our law books. But that’s exactly what this is. This was passed back in 1898. The Jim Crow era, of course, when people wanted to regain control over freed slaves and black people politically. And there were just a slew of laws that were passed and this was one of them that basically tried to do that.

And they didn’t like the fact that black folks were now going to be allowed to serve on juries, so this was going to be a way to temper what they thought was a problem and establish their white supremacy.

Mike Papantonio: Yeah, this is directly from Jim Crow. Tell me about the Glenn Davis case. Glenn Davis is the case this is going to be tested on?

Because Louisiana has such a high exoneration rate, he was one of those cases. So the case of Glenn Davis was back in 1992, just a teenager, expecting a baby on the way, a witness fingers him for shooting and killing a drug dealer along with two of his cousins. Turns out the jury never even heard evidence that this eyewitness that testified against him actually wasn’t there and there was ever other evidence that showed that he might potentially … wasn’t guilty at all.

And in fact, two of the jurors, without even hearing that, thought that the evidence wasn’t strong enough to convict. So two of the twelve jurors voted to acquit him, actually. But because they weren’t in any other state but Louisiana, basically they weren’t allowed to do that. They could move forward with that conviction even though two jurors disagreed. They didn’t send them back to deliberate.

Mike Papantonio: Yeah, again, there are only two states that this happens because the rest of the country has realized, I mean it’s pretty evident.

Mike Papantonio: Beyond a reasonable doubt is the standard.

Mike Papantonio: So if you’ve got twelve jurors, I mean, look, these are people that are looking, some of them looking at the death penalty. You’ve got that issue and all of a sudden you’ve got some jurors that’s saying, “Hey, I wasn’t really convinced of this whole thing.” It gives the prosecutor such an advantage.

You know, there’s a whole study on what do you do to split a jury. Any experienced trial lawyer understands that there is a methodology. Whether it’s a civil case or not, you can isolate certain jurors that you think are a problem. You can isolate certain jurors who you believe are going to be leaders. There’s all types of ways to manipulate that. So, I mean not to have unanimous is very problematic.

Where do you see this going? What is your take on this story overall?

Mollye Barrows: Well, it’s interesting. When it’s on the ballot in November, there has been a lot of bipartisan support for it. In Louisiana, ballot measures have to be approved by lawmakers before they can even make it on to the ballot. Which I thought was kind of shady in and of itself. It seems like another way to control what people vote on.

But at any rate, at least it is going to be on the ballot November. So we’ll see what voters have to say about it. But there is bipartisan support for this.

And it’ll be interesting to see because it does seem like there are still holdover states. I mean, only in 2016 did Florida and Delaware do away with laws that required, they didn’t require a unanimous jury in death penalty cases. And that was finally ruled unconstitutional in 2016. Alabama is a state that still allows non-unanimous juries to rule in death penalty cases as well. They still allow people to be sentenced to death.

So, it’s going to be interesting. I hope Louisiana begins a trend of repealing more and more laws like this. Because how many times have I sat here and talked to you about some terrible-

Mollye Barrows: -thing that’s going on in Louisiana and how they are messing people over. And I assume that it’s really about money. I assume there are a lot of people making money.

Mike Papantonio: What it’s really about, I mean if you drilled down on it, it really is about the Jim Crow problem.

Mike Papantonio: Well, I mean, in law school there’s, you learn the underpinnings of why a particular state votes a certain way. Why does the jury instruction look like it does in that state? But it always struck me that anytime anything came out of Louisiana, it was influenced by the Jim Crow taint.

Mike Papantonio: And it was whether it was voting, whether it was juries, it always … and so it is time for Louisiana to kind of move into the 21st century.

Mollye Barrows: Let’s hope so. Even the 20th century would be nice at this point. You know?

Mollye Barrows: I agree. But no, you’re right. They are far beyond. Hopefully voters will see this as well and that they will vote to repeal this law and that will put them on a path towards a fair judicial system.

Mike Papantonio: Fair jury. Mollye, thanks for joining me.