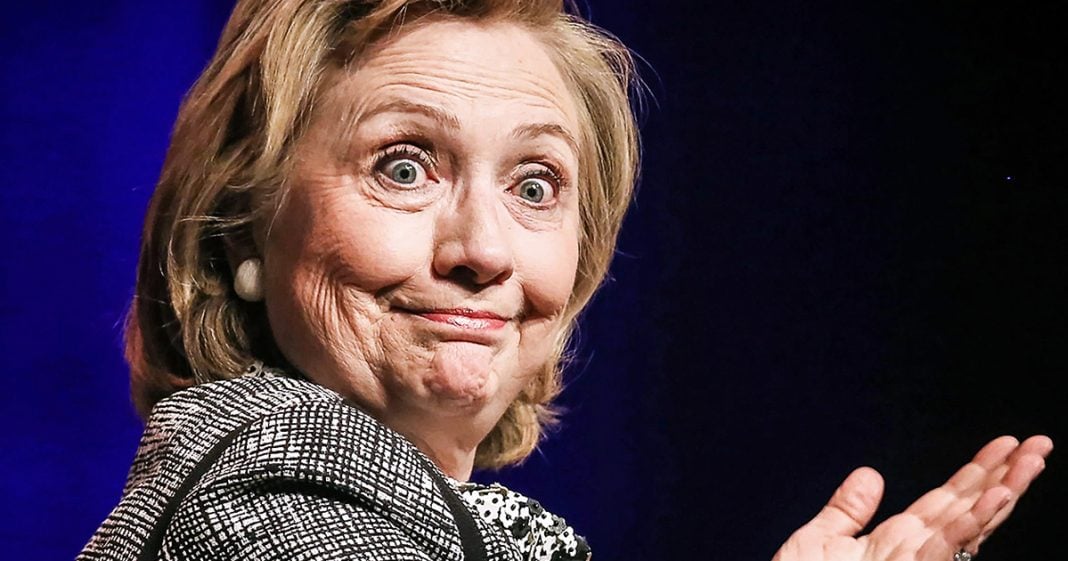 During a Q&A session over the weekend, Hillary Clinton was pressed on whether or not she was going to run for president again. Even though she said “no,” she later said that she’d “like to be president,” sparking fears among progressives that she was going to run, and likely lose, once again. Hillary Clinton’s time has passed, and it is time to look for younger leaders to come forward and move the Democratic Party in the direction that it needs to go. Ring of Fire’s Farron Cousins discusses this.

And now the words that very few people, if any, in this country actually want to hear. Hillary Clinton might be running for President again in 2020.

Now, during a Q&A this past Friday evening with Recode, Hillary Clinton specifically said no she’s not going to run for President again. But then when she was repeatedly pushed on the issue she said, “I’d like to be President”. You know, almost as if you were asking a first grader what they want to do when they grow up, I’d like to be President. Yeah, who wouldn’t?

“There’s going to be so much work to be done after a Democrat hopefully wins the next Presidential election. The work would be work that I feel very well prepared for having been in the Senate for eight years, having been a diplomate in the State Department”.

So she is saying that she is uniquely positioned to handle the challenges that the next Democratic President would face and that is the part of her statement that’s slightly problematic. Yeah, she’s qualified to be President of the United States. I don’t think there’s any question about that even among progressives. But, she’s had her opportunity. She’s had multiple opportunities and couldn’t walk away with a victory. She has proven that she cannot defeat Donald Trump. Whether you love her or whether you hate her, it is time for Hillary Clinton to move past running for office. If she wants to go out there and campaign, have at it.

I’m not one of the believers that she needs to disappear or go take up knitting. I don’t think that at all. I think there is still some value to Hillary Clinton’s name and if she wants to go campaign, if candidates ask her to do that, go do it. You want to give speeches, go do it. You want to go fundraise, go do it. Have at it. Just stop running for office, it’s not working.

We need fresh, young blood in the Democratic party and everything I am saying right now about Hillary Clinton I would also like to direct it to Joe Biden, to John Kerry, to Al Gore. Ya’lls time is up and I don’t even think Kerry or Gore were even considering running for President again. But it’s time to move on. I think even at this point Bernie Sanders might be a little over the hill too much to run for President again. We need young Democratic leaders, true progressives within that party to take on Donald Trump, assuming he’s still in office, to run again in 2020.

But if not, if we don’t have those young leaders, we’re probably looking at four more years of Donald Trump because Democrats are going to do what they always do. We’re going to put up some mealy mouthed, fake progressive who’s going to be wishy washy on the issues, they’re not going to know exactly where they stand on Medicare for all or debt free college or re -taxing the top 1%. They’ll give us a couple answers that seem vague, you can interpret it the way you want. And they’re going to spend most of their time trying to go after Donald Trump as a horrible human being which we all already know he is and it’s going to cost them the election.

We need people who not only understand the issues but who will stop at nothing to push these into real legitimate laws in the United States. And right now the Democratic party has not offered us a single person who I feel is willing to do that. Hillary Clinton is certainly not the kind of person who would push for those policies and make sure that we got them in place. She’s much like Trump, little too narcissistic. Little too egotistically and sometimes some of these people who’ve been in politics for too long feel like they’re owed that position. Unfortunately that’s where Hillary Clinton is. That’s where Joe Biden is. Nobody is owed the Presidency. You have to work for it. Or, in the case of Donald Trump, you have to cheat to get it.

Either way, the Democrats have not put forth someone yet who I feel is strong enough to defeat Trump and, more importantly, strong enough to push for what a majority of Americans, left, right and center, are clamoring for right now.