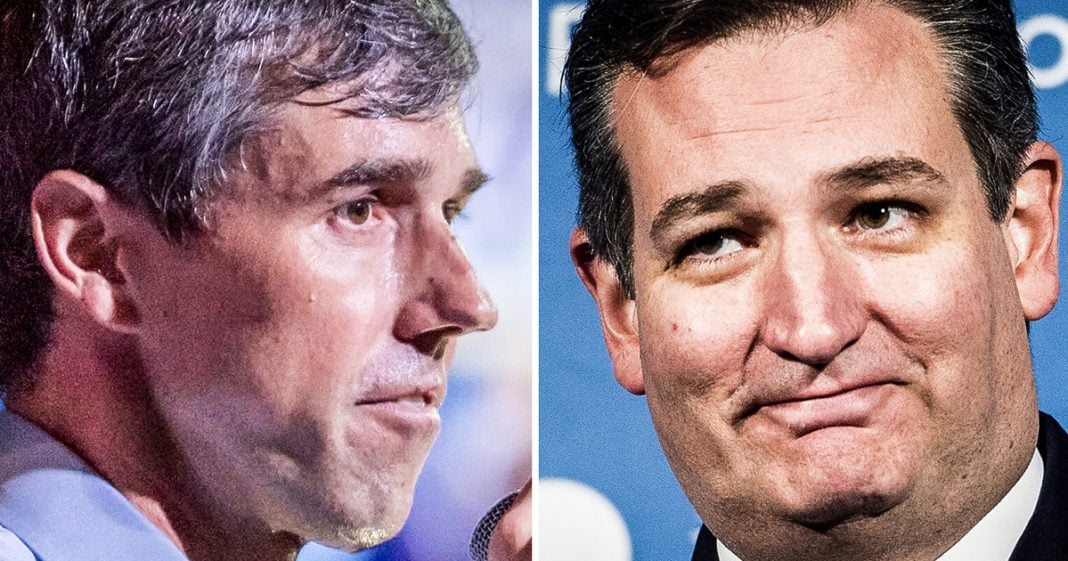 Election officials in the state of Texas have admitted that voting machines in the state are switching votes from Beto O’Rourke to Ted Cruz, and in very rare instances from Cruz to Beto, but they say they really can’t do anything about it. This is the problem with voting machines that investigative reporters like Brad Friedman and Greg Palast have been warning us about for over a decade, yet we’re still using these same flawed machines that could easily swing the election to Ted Cruz in Texas. Ring of Fire’s Farron Cousins discusses this.

Officials in the state of Texas have admitted that their voting machines they’re using for the midterm elections, they’re malfunctioning, and they’re actually switching votes from Beto O’Rourke to Ted Cruz. And, according to Ted Cruz, he’s actually had a couple of people complain to him that they’re switching their votes from Ted Cruz to Beto O’Rourke.

Now, there’ve been far more people saying that they voted for Beto but then it switched it to Ted Cruz. Maybe there’s some truth to what Cruz is saying, but either way, these election machines are not working properly and the state is even admitting it. Kind of. Because what the state says is that, “No, these 20 year old voting machines that we’ve been worrying about for decades don’t work, no, no, they’re not malfunctioning, it’s user error, because people aren’t waiting long enough after they try to vote for straight party ticket,” which is an option, you push the little button for straight party ticket and then it populates only the Republicans or only the Democrats depending on which button you push.

But, if you don’t wait long enough, according to state election officials, for it to populate all those, it’s just gonna end up switching them and it’s gonna be a whole just cluster crap of craziness on these ballots. So, it’s totally user error. Even though these machines aren’t working properly, we’re still gonna blame it on the users and more importantly, “We’re not gonna do anything about it,” the state of Texas says. “We’re gonna keep using these voting machines that we know aren’t working properly, that we know are super easy to hack even by pre-teens in the United States. So, we’re just gonna let it be because at the end of the day, it’s probably gonna switch more votes from Beto to Ted Cruz, and not the other way around. So hey, we’re gonna benefit from it either way.”

You know what makes me so mad about this story, is not that Republicans don’t wanna do anything about it, we know they don’t wanna do anything about it. They never have. But it’s because, and I’ve said this before, and unfortunately I’m gonna have to keep saying it, we’ve ignored the warnings from people who have been investigating voting machines for well over a decade at this point, about 15 years most of them have been looking into voting machines, warning us of the dangers and telling us that we need to switch to paper ballots. People like Brad Friedman. The people at Black Box Voting, Greg Palast. All of those folks have been warning us for 15 years at least, that these voting machines are unreliable, that they switch votes and that they’re easily hackable.

And, even when the Democrats had power in Washington, D.C., they did nothing about it. And, I know this is a state issue, but you easily could have sent down some kind of legislation that made it to where you had to have some kind of paper receipt, a paper backup if people didn’t wanna use these. It was an easy fix and the Democrats failed to do it again.

So, what’s gonna happen in the state of Texas, is that we’re gonna have lots of complaints on voting day, midterm day next Tuesday, of people saying, “I tried to vote for Beto, but it kept changing it to Ted Cruz, so I got frustrated and walked out.” We saw that in 2004, we saw it in six, 08, 10, 12, 14, 16, we’re gonna see it again this year because nobody listens to the warnings of people that are smarter and know the issue better than they do. And, that’s one of the biggest problems we have in the United States. It’s not uniquely Republican and it’s not uniquely Democrat, it’s a uniquely American thing.

We don’t wanna listen to the people who know better. We don’t wanna listen to the people who tell us there’s danger ahead. We think we know better. And so, we’re just gonna go ahead with it and as a result, could end up losing a Senate seat that could rightfully belong to Beto O’Rourke instead of Ted Cruz. Because I guarantee you, if these state election officials actually thought that these machines were switching votes from Republicans to Democrats, we would already have millions of new paper ballots ready to go and those old voting machines would already be sitting in the dumpster. That’s not happening, which leads me to believe that I don’t think there’s any voting machines switching votes from red to blue.