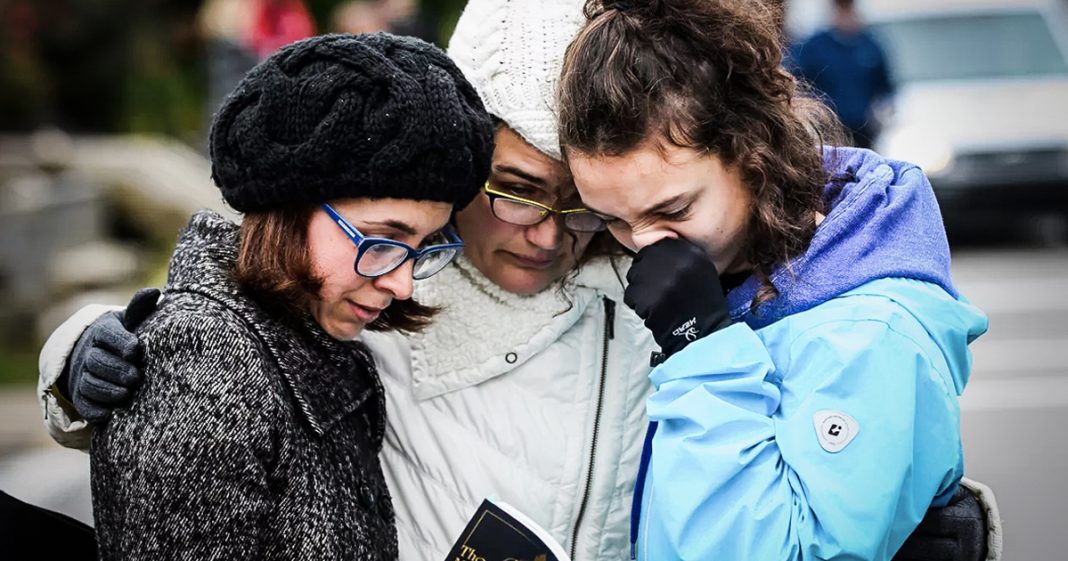 As a new week begins, we can’t brush off all of the attacks that took place on our own soil last week. The attacks in a Synagogue that claimed the lives of 11 people, the bombs that were mailed to prominent opponents of Donald Trump, and the race-based shooting that took place inside of a grocery store – all of these were acts of domestic terrorism carried out by individuals who feel emboldened under the current political climate. Ring of Fire’s Farron Cousins discusses this.

In the last seven days we have seen multiple different terrorist attacks carried out by far right extremists here on United States soil. We had the 14 pipe bombs sent to prominent members of the Democratic Party, Democratic donors, members of the media, John Brennan, all kinds of folks, all of whom had been critical of the president of The United States. There was a shooting in a Kroger grocery store last week by a White man who was specifically targeting African Americans. He even went up to one White guy who was cowering and said, “Whites don’t kill other Whites.” And then of course, this weekend the anti-Semite who entered a synagogue and killed 11 people including, a Holocaust survivor. 11 people dead in that instance. This is far right domestic terrorism. It’s being spurred on, these people are emboldened by the president of The United States, by his rhetoric, and by extension the Republican media and Republican politicians.

All of these people have been radicalized by what’s happening within the Republican Party today. The Republican media, the FOX News, the Breitbart, Daily Callers, all of those spreading these conspiracy theories about George Soros, about Hillary Clinton, about John Brennan, and the fake news media. All of those conspiracy theories are what is pushing these people to do these kinds of things. When FOX News goes out there and says that, when Tucker Carlson for example said, “They’re trying to take away our culture,” that emboldens people to go out and kill other people who do not look like them. That’s what’s happened. All these attacks on George Soros are anti-Semitic, and it emboldens those people. But at the end of the day, all of this rests on the feet of the president of The United States.

And his response to all of this was that, “It’s the fake news media’s fault.” That’s actually what he said, “It’s the fake news media’s fault for creating such hate and division here in The United States.” Also, “If that synagogue had been packed with armed guards, nobody would have died.” I mean forget for a moment that actually three police officers were shot by this lunatic. So yeah, they had weapons. They still got injured and weren’t able to stop him. This has to stop. This has to change. In order for that to happen there has to be major reforms that take place with the Republican Party, with their media, and with their leaders because as long as Donald Trump is in office, and he’s spreading this hate, and this propaganda, and these conspiracy theories fed to him personally by people at FOX News this is only going to get worse.

I predicted early last week at the time when we only knew of one bomb being sent to one person and that person was George Soros, 13 bombs came after that, and I didn’t even know that yet, but I still predicted that as we get closer to the mid-terms, as Donald Trump does more and more rallies instances of violence are going to increase. This is one of those times where being right absolutely sucked. But this was predictable. We have seen what happens the more the president goes out there and spreads this hate and division, people get active, and they do horrible things. And that is exactly what is happening in this country right now, and 100% of it begins with the president of The United States, Donald Trump.