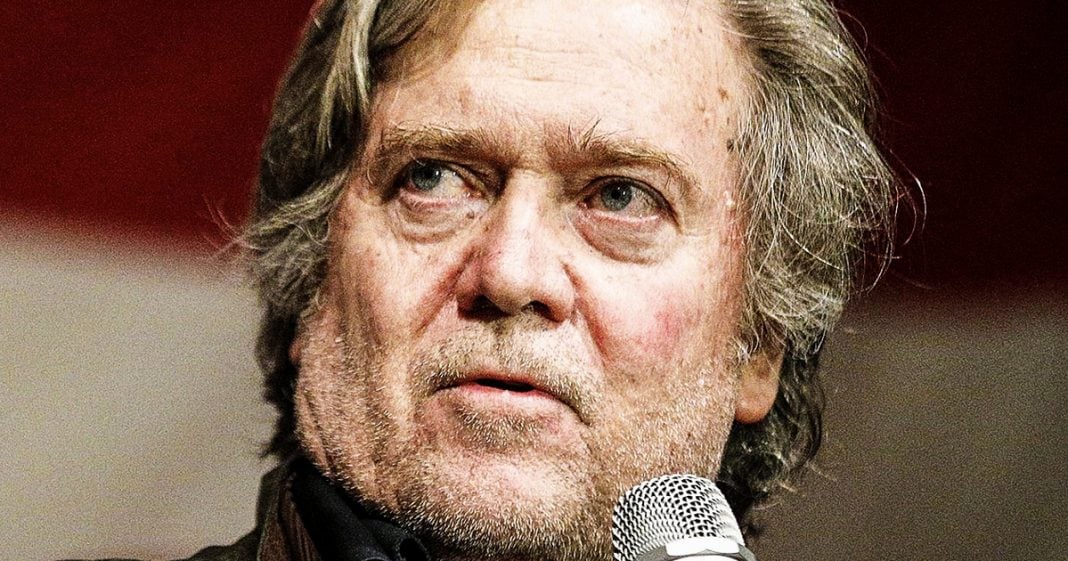 Steve Bannon held two rallies this week in the state of New York, and virtually no one showed up to either of them. The first, held on Staten Island, drew a crowd of only 38 people, while the second one in upstate New York drew a crowd of less than 200 while they were expecting hundreds, if not thousands, to show up. Even the candidates that Bannon had booked for his rallies failed to show up because the man is so toxic and universally hated that appearing with him could effectively end a political campaign. Ring of Fire’s Farron Cousins discusses this.

Nobody likes Steve Bannon. The former White House chief strategist this week was able to prove that nobody likes him by holding two different rallies in the State of New York. Earlier this week, towards the beginning of the week, he held a rally at Staten Island. He wanted to talk about the midterms and get people energized to vote and basically have a smaller version of Donald Trump’s rallies, but Bannon still thought he could draw hundreds, if not thousands, of people to his rallies. The one on Staten Island drew 38 people. 38 people showed up to hear Steve Bannon talk about what a great human being he was.

Undeterred from his tiny little crowd, later in the week Steve Bannon decided to go to Upstate New York where he was going to try again and do another rally. He even had New York Assemblyman Republican David DiPietro, who was going to come and be there, kind of campaign with Bannon a little bit. Everybody was going to come out. That rally pulled in less than 200 people. Also a no-show was the Republican Assemblyman who decided he didn’t want to be seen in public with Steve Bannon. Your guest of honor doesn’t even show up to an event that you’re putting on to benefit his campaign. That’s pretty sad and pathetic, Steve.

What’s even funnier is that when you still held the rallies, the one for 38 people and the one for a little under 200 people, all you did was talk about how important you were in getting Donald Trump elected. I would say, considering the President’s historically low approval ratings since the day he took office up until today, and the fact that people really seem to hate all of his policies unless you’re in the top 1%, I would think that bragging about getting Donald Trump elected right now would probably be one of the worst things anyone could do, because they’re not looking for who to praise for giving us Trump. They’re looking for who to blame for giving us Trump.

You’re out there telling them that, “Hey, I’m the guy. I did this thing. Come to my rally.” There’ll be, obviously, lots of open seats, so you can spread out if you need to. Lay across a couple. Bring a bag and set it next to you. You’re not going to worry about people needing the seat, because nobody wants to hear Steve Bannon talk.

I’m hoping that this is a positive sign for this country and not just a rebuke of Steve Bannon but a rebuke of everything that this man stands for, a rebuke of Breitbart, kind of turning the page against these wild conspiracy theorists who Trump has surrounded himself with and who think that they can now take that and go out there and spread their hate and division at their own little rallies.

Hopefully, other Republicans are watching what’s happening to Steve Bannon. Hopefully, they’re watching what’s happening to Reince Priebus and everyone else who left the Trump administration. Sean Spicer. How successful have any of these people been after being associated with Donald Trump? Because the answer is they haven’t. Everyone who worked for this administration and then left, was either fired or let go, has pretty much landed flat on their face.

Steve Bannon isn’t an example for Republicans. He is a terrifying warning of what’s going to happen to them if they try to be nice and friendly and work with Donald Trump.