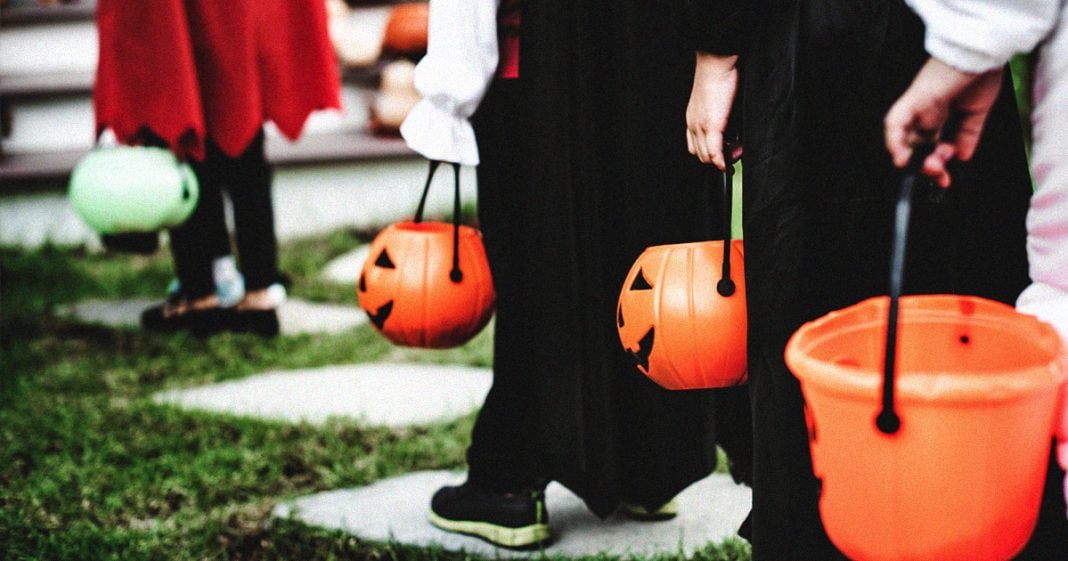 Via America’s Lawyer: Mollye Barrows joins Farron Cousins to talk about a new law in Virginia which is bringing jail time to trick-or-treaters over the age of 12.

Farron Cousins: If you’ve ever handed out treats to eager trick or treaters, you’ve probably run into a kid who seems just a bit too old the being ringing your doorbell. Now some towns in the Hampton Roads area in Virginia, appear to have solved that problem. Jail time for offenders. Joining me now to discuss this is Mollye Barrows, legal journalist for The Trail Lawyer Magazine. Mollye what the heck is going on here?

Mollye Barrows: I know, and let me just say, I know it’s not the hardest hitting legal story. But we’re coming up on the Halloween holiday and it seems fitting to talk about. Certainly folks in this area, some of them are a little bit up in arms about this law. So in the Chesapeake area which includes South Hampton in the city they’ve made it basically a class four misdemeanor to be trick or treating out, over the age of 12. You’re not allowed to go out trick or treating if you’re over the age of 12. And you’re not supposed to be out past eight. They’re saying, six to eight is a good enough time for folks to get out there and trick or treat. But if you’re over the age of 12, and if you’re out past eight, you could be facing some serious problems.

I mean you’re talking about fine between $2,500, maybe even a jail sentence of up to 30 days, Farron. So folks are a little concerned about this. They’re like, “Hey, what’s the big deal. We should just be out trick or treating and enjoy ourselves. This is a holiday to celebrate children’s independence.” Dress up like a ghost, go door to door. Maybe you’re old enough to do it without your parents at that point. But they’re serious, they don’t want any problems.

Mollye Barrows: Yes, there is a reason. And basically they’re trying to cut down on any Halloween hooligans who might be up to any shenanigans like vandalism, sneaking up, destroying public property. Whether it’s Halloween decorations or smashing jack o’ lanterns in the street. It’s easier sometimes to get away with that when you’ve got lots of people in the streets at night doing their things. And teenagers get a little wild and crazy. And maybe get carried away.

So I think this was more of a deterrent, and that’s what the folks at the city of Chesapeake are saying. As well as their local law enforcement. “Hey, we’re not really going to arrest you. I mean we might, kind of.” But really what they’re saying public statements is, this isn’t intended to frighten you, it’s just to make you aware that there are serious consequences. We don’t want any rebel rousers out there, a few bad apples. So just know that this is a potential punishment if you are out there causing problems. But they’re not actively looking for people who are violating these rules.

And in fact parents are allowed to be out. If they were such stickler for it, you’d have a five year old walking around without their parents. Because like I’m sorry, can I see your ID, it’s after 8pm? You’re not supposed to be here.

Farron Cousins: At least they’re not doing any kind of like stop and frisk, or say turn over your papers.

Mollye Barrows: Can I see your ID?

Farron Cousins: Yeah, make sure you’re under the age of 12. But they’re not alone, though, right? That’s the scariest part, is that Chesapeake’s not, like this is not a unique, like this weird little town is doing this.

Farron Cousins: Other people are doing it.

Mollye Barrows: Newport News, Suffik, Northfolk, Portsmouth, these are all same communities saying you can’t go out trick or treating if you’re over the age of 12. And they also want folks, of course, to be accompanied by a guardian if they’re younger than that. So it’s interesting, there area a lot of folks in Chesapeake though, who don’t want to see this happen. They want to see this law repealed. And it’s really a city code more so than a law. But it still carries legal consequences.

But they’ve started an online petition, more than 14,000 people have supported it so far. Their goal is 15,000. Basically asking that it be repealed and that families be allowed to decide, you know, what age their kids can go trick or treating and that kind of thing.

Farron Cousins: And you know, a lot of times, too, you do have the older kids, maybe the older teens, 13, 14 they will help and they will take out the seven year old if mom and dad don’t want to do it. Or if you have a community where mom and dad sit on the porch as the trick or treaters come up and hand out candy, the older brother or sister will take them out. And they’ll go to the door, too and get candy. They’re still young, they still like these things, it’s still fun.

And these towns just seem to be taking that away. Like, “No, trick or treating is serious business. We have to treat it this way.” It’s absurd. Just let them have their fun.

Farron Cousins: One night a year, come on.

Mollye Barrows: I know, is the vandalism that bad? Are you having such a string of problems that you’ve got to crack down because you’re right, half the fun of Halloween is the spontaneity and it does seem to undercut that. So we’ll see how they deal with this online petition Farron.

Farron Cousins: All right. Mollye thank you very much for telling us this story.