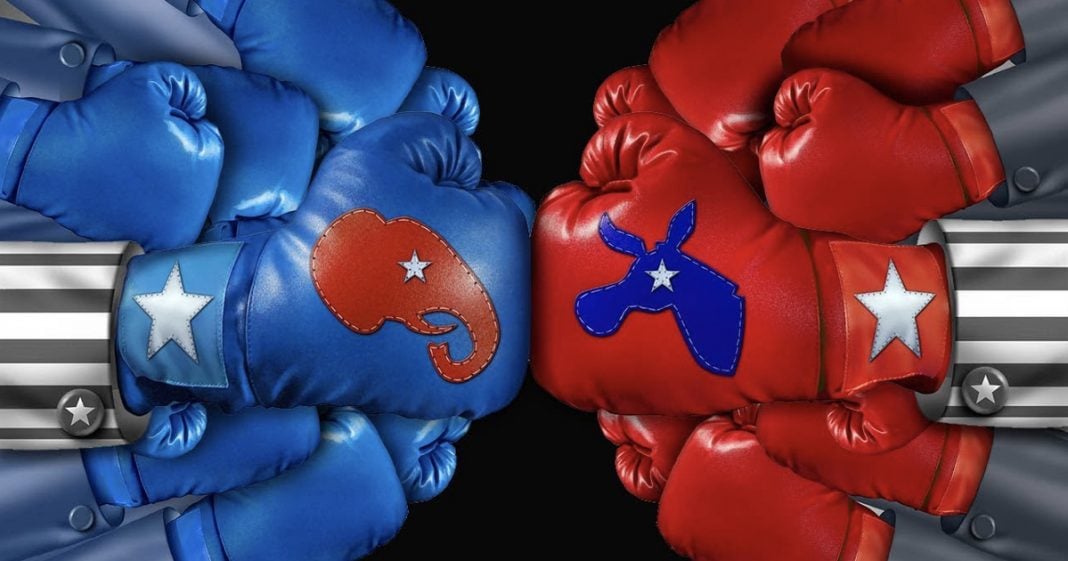 Twitter user @TheSasckMask sent us the following question: “Do you believe that having the America love it or leave it mentality is not only a tribal but also a dangerous mentality?” Ring of Fire’s Farron Cousins discuss this issue.

Next question is from Cassidy Brown who asks, “Do you believe that having the America love it or leave it mentality is not only a tribal but also a dangerous mentality?”

I do, and see, here’s my issue with this, “America love it or leave it. If you don’t like America get out.” It’s okay to be unhappy with what your country does. And not even necessarily in a partisan way. I mean you can think that we’re a good country, but we could be better. And that’s what you need to think.

Everybody from any country in the world could look at somebody else and say, “I like the way you do this better than the way we do this. We could learn from you. We could take something from you.” Unfortunately, we don’t do that. But when you really get to talking to people who’ve spent a lot of time traveling abroad, they will be the first to tell you that America has a lot of problems that need to be fixed and that can be fixed. But often times they’re not fixed because we do have that mentality of, “Nope. We’re America, the way we’re doing it is better than everybody else.”

I mean look at nuclear weapons for example. It’s okay for us to have hundreds upon hundreds upon hundreds of them, but somebody else wants to make one and, “Oh my God they’re a threat to humanity. We got to wipe them off the planet. Nobody can have nuclear weapons but us.” No. That is a stupid and dangerous mentality to have. Nobody should have nuclear weapons. But if we’re going to sit here on stockpiles of them, we lose the moral high ground to say that nobody else can have them. I understand the threat of other people having them. I also understand the threat of us having them as we’re the only country in the world, in the history of the world, that’s ever dropped them on civilian populations. Nuclear weapons in the hands of the US could be more dangerous than nuclear weapons in the hands of anybody else. But we don’t seem to notice that because of the tribalism, and it all goes back to that America’s better than everybody else mentality. We’re not.

We have to always believe that we can get better, and that we should get better. Part of that is the conversation going on right now about Medicare for all, debt-free college, legalization of marijuana. Things that other countries have already jumped on and been successful with. Those are foreign models that we want to apply here in the United States because we desperately need it.