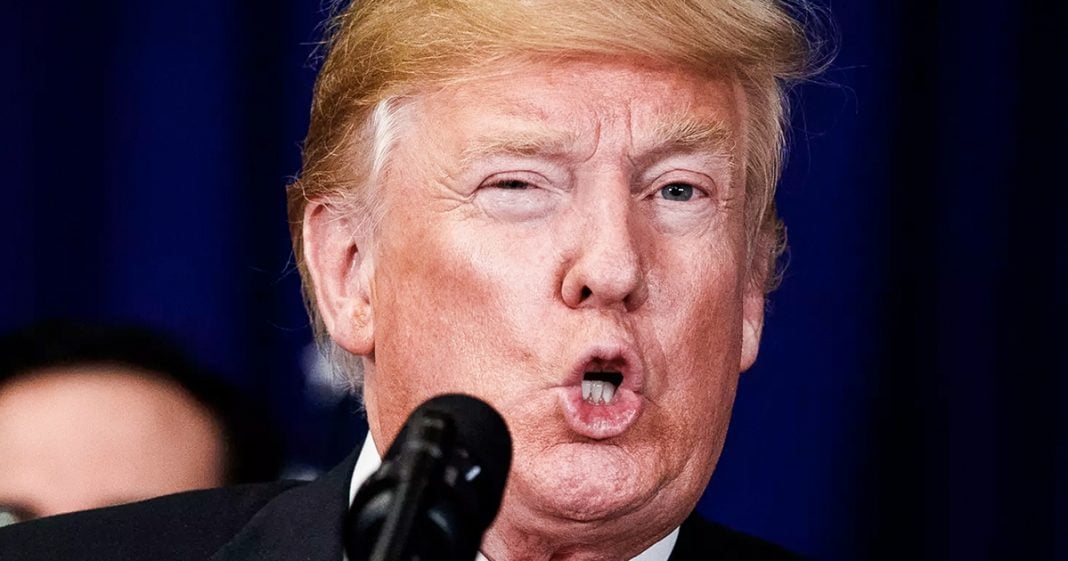 The midterms haven’t even happened yet, but that hasn’t stopped members of the Republican Party from blaming Donald Trump for the losses that they are expecting in November. But this anger may be slightly misplaced. Yes, Trump has poisoned the Republican Party, but the elected officials from the GOP were more than happy to remain silent and complicity with everything Trump has done. They may not like him, but they certainly haven’t stood up to him, and that’s why they’re facing major losses. Ring of Fire’s Farron Cousins discusses this.

Republicans are already ready to concede the 2018 midterms. About a month and a half ago, republicans internally admitted and actually, one of them, a GOP operative spoke to Axios, and they said, “Yeah, we’re expecting to lose between 60 and 65 seats in the midterms. We know that the democrats are going to take back the house of representatives.”

But that language has kind of softened. It’s not longer, yeah, we’re going to lose, we’re going to do what we can to not lose as many, but whatever. Now, that mood has switched to anger, because today, again, according to a new report by Axios, speaking to GOP operatives, they’re already prepared to blame Donald Trump for the coming midterm losses that they’re projecting.

It is worth pointing out that they have now kind of rounded down their estimated losses, and now, they think they may only lose like 25 seats. I think it’s going to be much more than that, but whatever. They’re slightly more optimistic, but they’re still blaming Trump for it, because Trump is hugely unpopular. He’s got these unpopular policies.

He’s locking kids in cages, and he tried to take away your healthcare, and he gave that massive tax cut to the wealthy. All of these are things that those same republicans have gone along with without saying a word. That’s the thing the republicans don’t get right now. It’s not just Trump, yes, he’s unpopular, and yes, he’s horrible.

They’re actually running on issues this year for the first time in over a decade, and that’s why they’re winning. Republicans think that Donald Trump is responsible for all their problems, and it’s not because the republicans tried to take away your healthcare half a dozen times last year.

Republicans are going to be more likely to go along with the idea of getting rid of Donald Trump. I’ve said this a lot, if democrats take back the senate, which they wouldn’t get enough to impeach, but taking back the senate alone, means that impeachment is 100% possible, removal from office is possible.

How is it possible if you don’t have the numbers to be able to do it? Because taking back the senate is going to send a message to republicans that they have a Donald Trump problem. Now, it might not be the most accurate message, but that’s the message they’ll take away from it. If they think that that guy sitting in the White House is the problem, they’re going to be more likely to want to remove him.

Why? Because in 2020, in addition to it being a presidential election year, you’re going to have, unlike this year, a majority of republicans in the senate up for reelection. More seats to protect than they have to protect this year. That’s going to be a problem for them. It’s one thing to lose the senate by one or two seats. If democrats get 51 or 52 people in there.

Then you only have to win back two, three, you’re back on top. But if you going to the next cycle and you lose another five or six or seven or more, it’s going to be hard to overcome that deficit. You could be looking at losing the senate for a decade. Republicans are always going to think that it’s Trump’s fault.

Even if the democrats can take back the senate by a 51 or 52 majority, I think it’s going to be fairly easy for them to find another 15 republicans to join with them, to remove Donald Trump from office. Maybe that’s wishful thinking on my part, but based on what we’ve seen from these republicans, based on what they’re saying now, telling Axios, they’re already blaming Donald Trump.

If the democrats are smart, they’re going to use that anger that republican politicians have against the president to their advantage, and get this psychopath out of office.