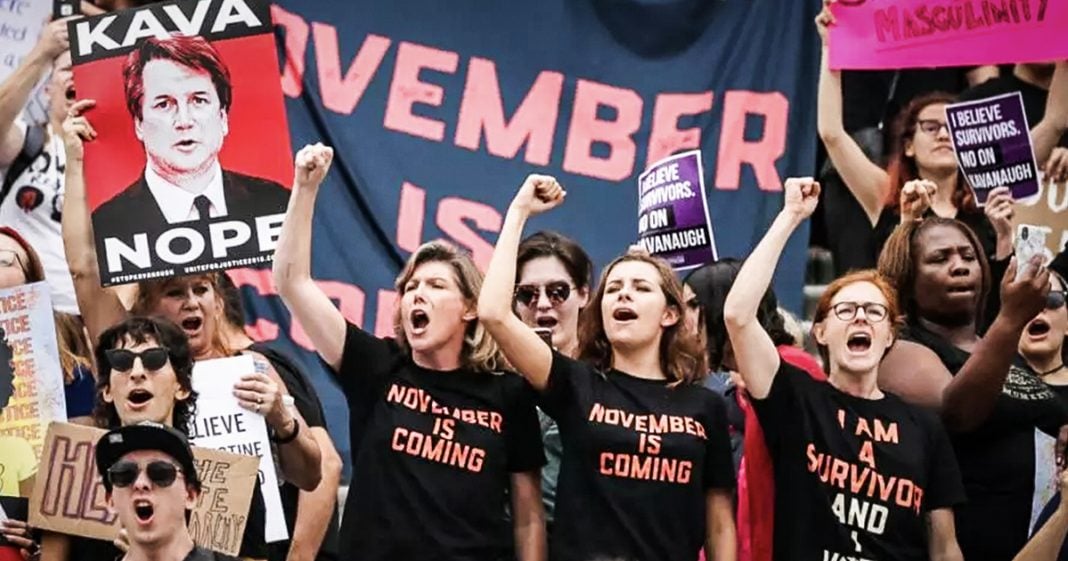 Republicans are having a bit of an identity crisis right now. But not over themselves, over the Democrats. They can’t decide if they want to deride the Democratic Party as a bunch of whiny snowflakes looking for a safe space, or if the Democrats are a bunch of angry, violent psychopaths coming to destroy us all with their violence. The Republicans are laughably out of touch here, and the voters aren’t buying their pathetic talking points. Ring of Fire’s Farron Cousins discusses this.

Donald Trump’s got a new talking point out there right now. Jobs not mobs, and he’s been testing that out ahead of the midterms here because he says the Republicans are the party of jobs, Democrats the party of mobs. Right now, we have right wing media outlets and Republican politicians telling us that Democrats are horrible, violent, angry people who are going to come beat you up, mow you down, bang on your business’ doors, bang on the doors of the Supreme Court. They’re going to hurt you, basically, because Democrats are so damn dangerous. These are the same Democrats who just, maybe a month ago, were delicate little snowflakes that needed their own safe space because the world was just so scary to them. But now, we’ve all turned into superheros that are out there just waiting to pound the crap out of any Republican we happen to come across while walking down the street.

My question is this. Which is it, Republicans? Are we whiny little snowflakes that need to be protected from everything the world has to offer? Or, are we these violent hulk-like creatures just waiting for the chance to smash in the head of a Republican? Because, you’re talking points at this point, like most times, actually conflict with one another. We can’t be both snowflakes and violent mobs. Do you see how those two don’t reconcile together? What’s really terrifying to you Republicans is the fact that people in this country are now willing to stand up to you. Hell, they’re even standing up to some Democrats they don’t like because too often they vote in the interests of corporations instead of the American public.

But, Republicans are terrified. They’re the sad little snowflakes who don’t want to be bothered, the people who need a safe space, because they can’t even go sit and eat an apple pie in a restaurant without somebody yelling at them, because all the Republican tried to do was take away their health care. You know, like any decent American would do, and now this person’s saying I’m mean. I can’t finish my meal now. Box that up, I’ll take it home. That’s not how it works.

I don’t always approve of some of the tactics, banging on the U.S. Supreme Court door. That was unnecessary. That wasn’t going to change anything. But, making these people uncomfortable, confronting them on the street, in a restaurant, in the airport, they need that. They need to understand that people aren’t happy. These talking points that Republicans and Breitbart and Daily Caller and all these other sites that low information voters read, telling us the Democrats are violent criminals. Nobody’s buying into that except for the people who will vote red no matter what. The average person out there, the independent voters, they see what’s going on. They understand the anger, and they’re not buying into these Republican talking points that a Democrat’s going to sneak up behind them and slit their throat one day. That’s only the Republicans who live in constant fear of any evil Democrats lurking out there, which doesn’t even actually exist. Democrats want answers, and the only people who can give them those answers are the people in office passing these horrible policies. If they can’t handle that, then maybe it’s time that they find a new job.