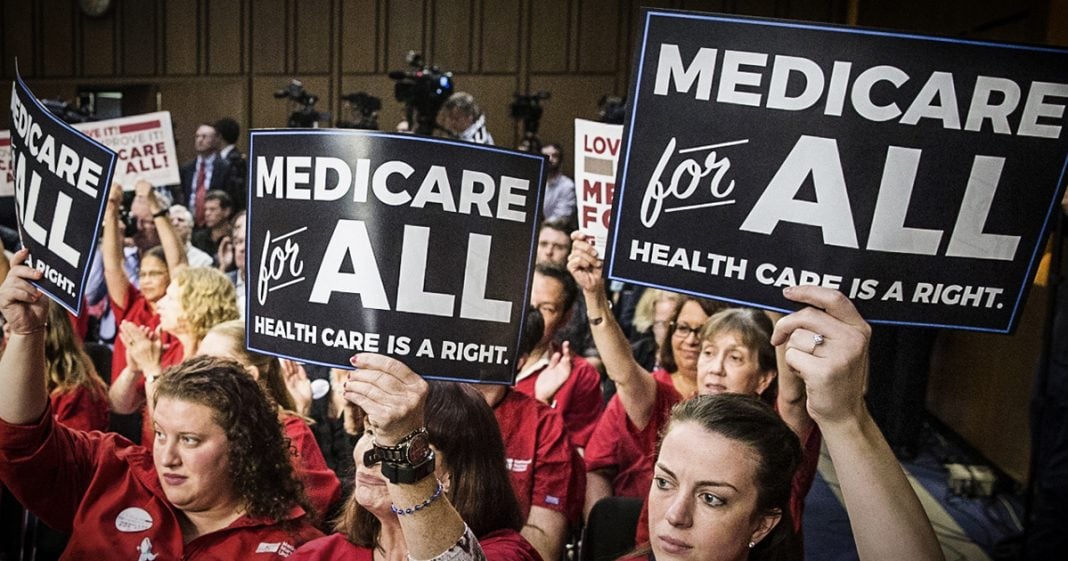 In a recent attempt to show how “bad” socialized medicine is, the White House released a chart showing that senior citizens in other countries wait longer to see a specialist than they do in the US. But what they didn’t tell people is that the majority of the senior citizens with the short wait times here are actually on Medicare, meaning that our “socialized medicine” is actually working really, really well. Ring of Fire’s Farron Cousins discusses this.

Earlier this week, the White House released a report titled The Opportunity Costs of Socialism and it’s a report where they tried to show that United States healthcare policy works so much better for senior citizens here than socialized medicine works for senior citizens in other countries, including Canada. So they included this handy little chart that shows the wait times, the average wait times that senior citizens have to wait in order to see a specialist. And as you can see on the chart here, the US, we’re way lower than everybody else which means that our form of healthcare works and everybody else with the socialized medicine, the Medicare for all, universal healthcare, their system sucks because people have to wait months to see a doctor.

Here’s what the White House left out of their little report. You see that little piece, all those senior citizens and how short they have to wait, the vast majority of those people with those really short wait times in the US, those are people who are currently on Medicare. Medicare is a form of socialized medicine. The thing that your entire report was trying to tell us is an evil bad thing. But instead, what you just did was show us that here in the United States, we actually know how to put a socialized Medicare system in place and have it be successful.

You know, Medicare is one of the highest rated in terms of approval of all government programs ever in the United States? I think it’s over 80% of people on Medicare say they really, really like Medicare and now you’re releasing a report showing us that these people who are on socialized medicine here in the United States don’t have to wait very long at all to go see a specialist? You just made the case even more than the Koch Brothers report from a few weeks ago that showed that Medicare for all would actually save us a couple trillion dollars in the long run.

Every way the republicans try to slice it, what they end up inadvertently doing is showing us that Medicare for all is the correct way to go for the United States. And I love it. I love when republicans try to prove something and instead prove the opposite by saying that Medicare for all doesn’t work, all they’ve been able to do is show that it’s the only way that healthcare in the US can work properly. It can save us money. It reduces wait times. In fact, one of the biggest things and their little report actually showed this that the US sucks on in terms of healthcare, we’re actually at the bottom of the list. Our chart would be all the way to the end is wait times for average people who don’t have health insurance to go to a doctor.

People who are putting off medical care because they can’t afford it. That’s where we lead other industrialized countries, including those with socialized medicine. That’s where we lead in people who can’t even go to the doctor. So yeah, Medicare for all, at this point, given the poll numbers for it, given these wonderful reports that republicans keep putting out showing how great it is, Medicare for all is an inevitability at this point here in the United States. It’s something that is going to happen. Maybe it’s not going to happen in the next year, maybe not even in the next two or three or four years, but in time, in a very short time relatively speaking, Medicare for all will become the standard here in the United States. It is the only way forward for this country that has struggled for decades to figure out the best way to run health care in this country.

The answer’s staring us in the face. Republicans want it, democrats want it, independents want it. The only people who don’t seem to want it are the ones representing us in Washington, DC, and of course, their wealthy donors from the healthcare industry.