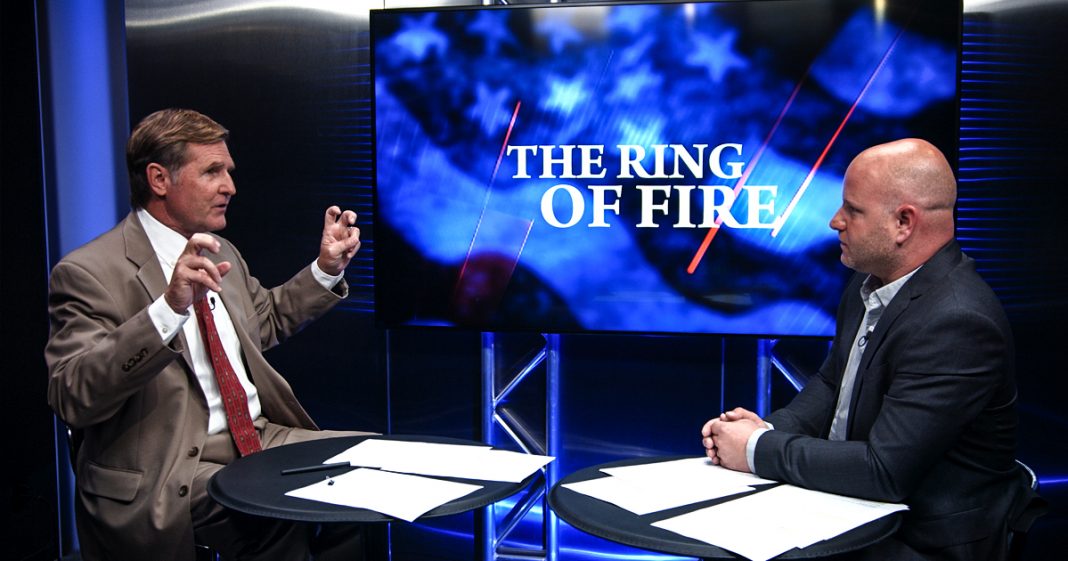 Lawsuits are piling up against the makers of stucco as more and more consumers are getting ripped off and left with incredible amounts of damage to their home. Ring of Fire’s Mike Papantonio and Farron Cousins discuss this issue.

Mike Papantonio: Lawsuits are piling up against the makers of stucco as more and more consumers are getting ripped off and left with incredible amounts of damage to their home. This isn’t a new case okay, this is … We’ve known this a long, long time. You’ve had the industry, their typical defense is, “Not our problem, we didn’t do anything wrong. Somebody didn’t apply it right. It was applied too low on the wall, it was applied in at the time of year …” I mean, all kinds of excuses we’ve seen on the stucco case. This is a very big case. People run the risk of losing their home because they can’t afford to have the stucco taken down and redone. And the problem is, once the stucco starts going bad, the house basically begins to crumble from an upkeep standpoint, and it’s also dangerous from a health standpoint because it creates all kinds of fungus, all kinds of problems that are health problems inside the home.

What’s your take on this case?

Farron Cousins: Well, I’m sure a lot of people think like, “Oh okay, sub par stucco. Why is this even important?” This is a massively important thing. This is happening all over the country, it’s the contractors, it’s the home builders. DR Homes I believe, was one of the biggest ones that got popped for doing it, and what they’re doing, they’re applying a layer of stucco to the outside of the homes that is far too thin, it’s below regulation. Second, they’re not putting the proper framing up behind the stucco that it’s supposed to adhere to, they’re sticking it directly on the house, which you cannot do.

Farron Cousins: It creates, when it starts to shrink as stucco does as it dries, it just makes it more likely to crack. And each one of those cracks, no matter how big or small, lets in moisture. Moisture on wood, moisture in your home, causes massive problems.

Mike Papantonio: Not just mold. Mold is the health element of this, isn’t it?

Farron Cousins: Right. Hugely toxic, depending on the type of mold which varies from city to city. But it also, it causes water damage to the home because actual water can seep in, it weakens the wood, leaves it ripe for termites, they now have an easy opening, which insurance doesn’t cover. If you’re not bonded for the termites, you’re not covered for that which was caused by stucco. If you don’t have flood insurance, you’re not covered by your regular insurance for the water damage and you have nowhere else to go. This is your biggest investment of your life is your home, and these contractors are ruining it.

Mike Papantonio: Okay. Here, let me run this by you. Again, we talked about it earlier, this isn’t a story about Trump.

Mike Papantonio: This isn’t a story about Republican politics and how crazy they are. This is a story that corporate media is not, they’re barely telling. And you’ve got hundreds, you’ve got millions of these homes out there that are suffering from the same problem. And it is exactly the same. Houses crumbling, they can’t, there’s no way to solve it except to pull all the stucco off, rebuild all the rotten wood that’s under the stucco, start again. Most of these people have mortgages on their home already. So what they’re having to do is they’re having to get second loans, second mortgages, just to get their house up to standard.

So what do they do? What are the avenues open to them? Obviously, there are a lot of people that you can go after for this.

Farron Cousins: Yeah, absolutely. The main one here is the contractors who are hired by the, either the home building association or by the homeowner themselves. If they put this up, this is their responsibility.

Farron Cousins: But they’ve gotten out of a lot of it because people don’t understand their rights and the contractor says, “Hey, well, yeah, you should have put some kind of treatment on it. And so this is your fault, not mine.” And the homeowner walks away thinking, “Wow. I screwed up so there’s nothing I could do.” But that’s not the case. “You should have caulked it out.” “Oh, I didn’t know that.”

Mike Papantonio: Or, “You should have known after we finished there’s certain things you have to do every two years to your stucco home. Oh, by the way, we know we told you that.” We’ve even see them create documents that are completely fabricated documents.

Mike Papantonio: Where they say we told the homeowner they needed … All of that is a lie. You will … And here’s my message. You will succeed in these cases, okay? We have … There’s several lawyers in this country that are just very, very good about it. A lawyer up in North Carolina, probably the leader in this litigation, who’s been through every iteration of both the stucco manufacturers that actually that make the material. They know they have problems with it. The people who apply it, they know they’re doing some stuff wrong. But what typically happens is they’re in a race. They’re trying to get finished quickly. Every day they’re making money so they cut corners. This can be done properly. Stucco can be applied properly. But not the kind of stucco that’s being sold out there, pre-fab …

Farron Cousins: Well, that’s the thing. We uncover archeological finds, because stucco has been used for thousands of years, where the stucco is still standing, it’s still virtually water tight after 5,000 years.

Mike Papantonio: Yeah. Well how about Greece and Italy?

Farron Cousins: Yeah, exactly. So if it’s cracking on your home after two years, it’s not anything you did, it’s because they cut corners.

Mike Papantonio: Yeah. And so … Here’s the best advice, don’t give up, go after them, you will win with the right attorney.

A group of doctors has filed a lawsuit against an insurance company because it denied … Well, Anthem Blue Cross emergency room coverage, I mean, it’s another company that’s put together for one purpose, and that’s to rip off consumers.

Farron Cousins: Absolutely right. And what’s happening right now is these doctors realized people would come in to their ERs, they would treat them, they send them out. Only to find out that the insurance wasn’t going to pay for it. So basically the hospital, and unfortunately this is not a good part of it, the hospital wasn’t making their money, so now they’re mad, not the doctors necessarily, but the hospital corporation, mad they didn’t get paid by the insurance and they can’t get this person to pay their $8,000 bill. But what’s at the heart of this is the fact that these doctors are saying, “Listen. You can’t deny somebody just because your paper pushers didn’t declare when they had an emergency. That person didn’t know. Maybe they came in for a toothache, but they don’t know if it’s just I ate something or chipped my tooth or a heart attack.”

Mike Papantonio: Or had a stroke. Yeah, yeah.

Farron Cousins: Yeah. Because they can’t differentiate between the symptoms, and a lot of harmless things also share symptoms with major …

Mike Papantonio: Okay. So here’s what happens. This company, they say, “We’re going to play law of averages.” That’s all these companies do. They say, “If we deny 10 people, three of them aren’t even going to try to fight back. Two of them are going to fight back and we’re going to push them back. Two of them we may have to pay half of what we owe them, and we come out ahead.” That’s the formula. We’ve actually seen documents where the actuarial is saying, “How do we minimize our exposure?” And they know the biggest thing is most people aren’t going to fight back. They know exactly how this goes. That’s what Anthem’s counting on here. And so as you watch this case develop, they’re just like all the other insurance companies. Insurance companies are in the business of keeping your money, not paying it out.