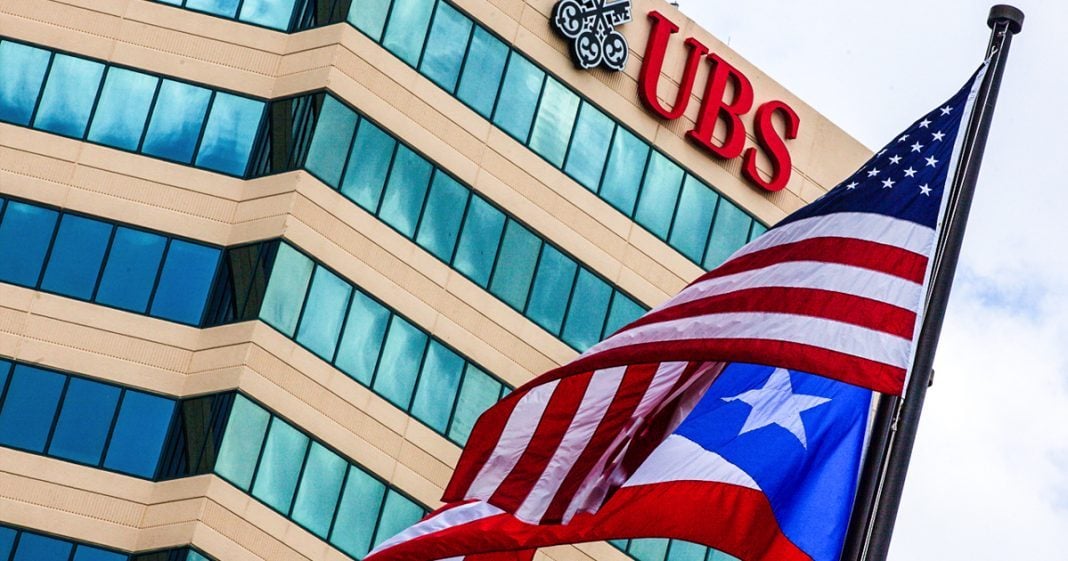 This past week, one of the largest financial institutions on the planet was again held accountable for its role in the destruction of the Puerto Rico economy and defrauding investors.  Last Monday, the Financial Industry Regulatory Authority (FINRA), a private, non-profit organization charged by Congress with policing the nation’s investment banks and brokerages, ordered the Swiss-based banking juggernaut UBS to pay over $19 million to a client who alleged numerous violations of Puerto Rican securities laws as well as  addition to breach of contract and negligence.

The claimant, Luis Moyett, is only one of the hundreds of UBS clients who invested in closed-end Puerto Rican municipal bonds and lost millions of dollars when the island commonwealth’s economy collapsed in 2013.

Moyett’s arbitration began in July and continued through August.  On October 22, the three-member arbitration panel unanimously ruled in his favor, ordering UBS to pay a total of $14.9 million in compensatory damages, along with an additional $745,000 in interest.  Moyett will also be reimbursed for legal fees, arbitration costs and his initial filing fee of $750.

“This was a grueling job, often 13-hour days of testimony,” said Peter Mougey, a securities and business litigation attorney at Levin Papantonio, who served as co-counsel for Moyette.  “There were over 300 exhibits, some hundreds of pages long.  We think the panel got it perfect and I was very impressed with the long days they put in and their attention to detail.”  Mougey, who has been involved with UBS litigation for the past few years, has represented approximately 300 of the defendant’s former clients.

The day of reckoning for UBS has been long in coming.  The situation that allowed this tragedy was decades in the making, and the result of well-meaning – but ultimately, misguided – U.S. government policy.  Decades ago, U.S. corporations were given special tax incentives under the Internal Revenue Code, encouraging them to open factories and create jobs in Puerto Rico.

When those incentives expired in 2006, those same corporations took advantage of ill-considered “free trade agreements” and fled the U.S. territory for low-wage countries.  This devastated the Commonwealth’s tax base, and revenues plummeted.  At the same time, inflation, driven by the exploding costs of fossil fuel imports upon which Puerto Rico is heavily dependent, took a massive toll on the island’s economy.

Within three years, 44% of Puerto Rico’s revenue went to service the island government’s increasing debt and cover spending deficits.  In response, Puerto Rico’s governor at the time, Luis Fortunio, enacted austerity measures.  However, these accomplished little beyond provoking understandable outrage among the island’s residents.  Finally, the Commonwealth attempted to increase revenues through the sale of government bonds.  Under U.S. tax laws, dividends from Puerto Rico municipal bonds are not subject to tax, which under normal circumstances, make them very attractive to investors.

Obviously, these were not normal circumstances – but UBS did not inform its clients of the impending economic disaster.  Instead, brokers and managers were instructed (and even pressured) to market these investments aggressively to clients who were ill-informed and knew little about bond markets – and even less about Puerto Rico beyond the reputed tax benefits of its municipal bonds.  Instead, that tax exemption was used as a major selling point.  Essentially, clients invested their hard-earned money based on nothing more than the word of UBS brokers in whom they had come to trust.

Even if UBS had been aware of what was going on in Puerto Rico, they would have done little, if anything to prevent the fraud from occurring.  For the past eight decades, UBS has been involved in numerous illegal activities, including laundering assets stolen from Jewish families by the Nazi government during the 1930s and transferring funds to countries under federal trade embargoes.  In recent years, the institution has recently been under investigation for tax evasion, currency manipulation and more.

John Nevares, the San Juan-based litigation attorney with whom Peter Mougey worked closely, lauded Monday’s decision: “Today’s FINRA Arbitration Award in favor of our client is a win for justice and investor rights, and we are very pleased with the result.”  Mougey notes that under FINRA rules, a member firm such as UBS has an obligation to supervise the activities and conduct of its brokers and advisers while in their employ.  Because of this, UBS Puerto Rico is likely to find itself paying out more to former customers who have suffered catastrophic financial losses as the result of its employees’ misconduct and fraudulent behavior.