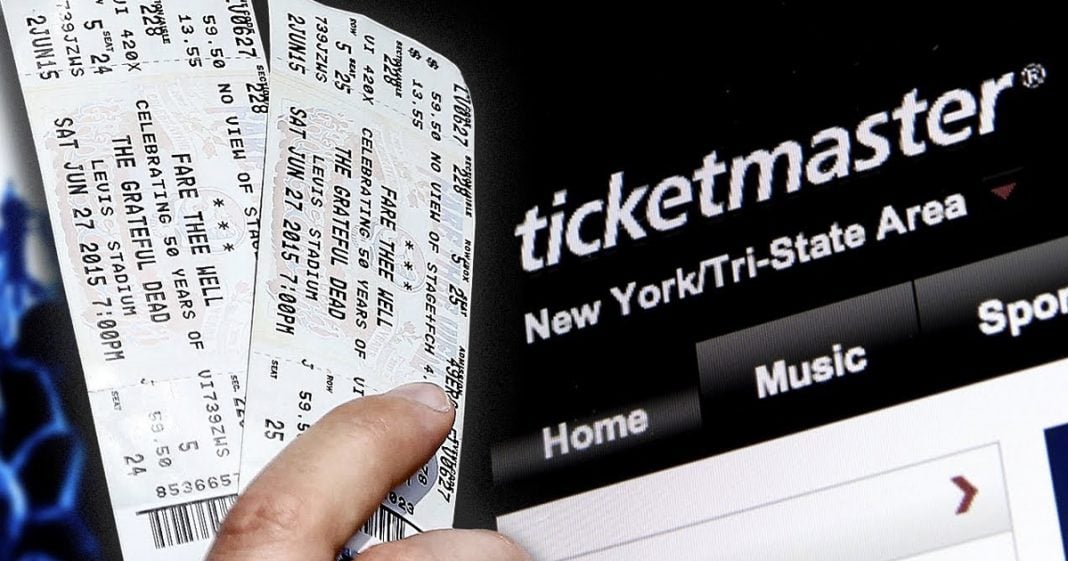 According to new reports, Ticketmaster has been working with ticket scalpers to essentially get paid TWICE for event tickets sold through the company – Ticketmaster gets the initial ticket sale, and then they receive kickbacks from the scalpers and resellers. This is putting more of a burden on consumers, as a new class action lawsuit claims. Ring of Fire’s Farron Cousins discusses this issue with Scott Hardy from Top Class Actions.

For more information about the Ticketmaster case, visit topclassactions.com

Farron Cousins: Ticketmaster has long been the scourge of concert and event goers all over the United States, mostly due to the fact that they charge these exorbitant fees to actually just purchase a ticket to an event. Well, any consumer who is angry about that is about to get even angrier at this story because it turns out Ticket Master has apparently been working with scalpers to gouge consumers twice. Joining me now to talk about this story and the class action that’s going to result here is Scott Hardy from topclassactions.com. Scott, thank you for being with us today. This is such a crazy story, isn’t it?

Scott Hardy: It’s insane, and it’s one of those things that as an avid concertgoer myself that I see, and I wonder because how do tickets sell out so quickly at events? I mean, obviously for big events like Taylor Swift or any of the top-named stars out there that are touring, you know they’re going to sell out, but why do they sell out in seconds, and this class action actually goes into detail into how the tickets sell out so fast, how the scalpers are buying them and the tools that Ticketmaster may actually be providing to help them do that.

Farron Cousins: And you know, this is important to kind of distinguish here. A lot of people still have the image of scalpers in their head of people standing outside the event with a jacket pocket full of tickets. Not necessarily how that works anymore. Now you’ve got these actual corporate websites where they do these reselling of tickets, Ticket Master is involved in those. You’ve got the authorized resellers, because they get a cut of the profits here, and that’s part of the issue. So, having set that up, how exactly does this work? You know, you talked about how do they sell out in seconds. Explain that a little bit, because these investigations have found quite a lot of info on it.

Scott Hardy: Yes, it’s really fun to dig into these things and find out how companies are allegedly screwing the consumer, even though they’re doing their best to help people out. “Oh, we want to go ahead and make sure everybody has a great concert experience,” but Ticketmaster and different venues, like Live Nation, are doing things like selling platinum ticket packages and those are essentially ticket scalper prices but they’re sold directly by Ticketmaster. Now that potential particular piece is not included within this class action, but I think we’re going to see that in the future, because if Ticketmaster is saying, “Hey, we’re selling these tickets. These are all the tickets for a venue,” and then magically you show up there to their website and you find additional tickets for sale that actually aren’t available unless you pay two to four times the actual face value of the ticket, so it’s a problem.

Now, ticket scalpers are a huge, huge business as you mentioned. No one’s sitting there outside the venue, and I would never ever buy a ticket from anyone outside a venue because there’s so many ways to print out fake tickets and make them look so great. So a lot of us have to go to authorized ticket resellers, through Ticketmaster, or through other potential resellers like Stub Hub and other things. But when you find out that there’s actually a ticket scalper conference, which has hundreds and hundreds and hundreds of attendees every year where all they’re talking about are ways to buy tickets and then you have Ticketmaster actually there helping potentially sponsor events and marketing tools, like a tool called Trade Desk, which was created and used by scalpers but it was created by Ticketmaster and it’s one of their suite of tools that these scalpers use to buy blocks of tickets.

Farron Cousins: So, we have people out there … It’s almost like it’s an automated system for some of them. They’ve created multiple different accounts so they can get in there, buy blocks of ten tickets, twenty tickets, maybe only five tickets per account depending on what the limit is, because I know sometimes for concerts or events they’ll limit how many you can buy. But that’s what they’re doing, and they’ve paid full price for their tickets, Ticketmaster gets that money, those fees, everything. And then they go and they take these tickets to one of those authorized resellers, and then Ticketmaster or Live Nation, whoever it is, has a financial stake in those sales as well so they get double the fees. Consumers are paying a higher price for a ticket because they don’t have the tools that these professional, essentially corporate sponsored scalpers at this point. They don’t have those same tools. They just wanted to go see a concert or a comedy show or a football game and they’re screwed twice on the deal here.

Scott Hardy: Yeah, absolutely. That’s the thing, is that what we’re seeing from the research, it looks like Trade Desk was created exclusively for ticket scalpers and ticket brokers, and as you mentioned, I want to go ahead and go to this concert or go to a football game and the game is sold out, the concert’s sold out. I have no choice. Now I want to make sure that I get a ticket, have a valid ticket so I’ll go to a Ticketmaster authorized reseller. But as you mentioned, that ticket scalper bought their blocks of tickets using a tool that was created by Ticketmaster, paid the Ticketmaster fees for the ticket, now is reselling those tickets through a Ticketmaster approved website, Ticketmaster is digging you for a fee again, and we’re paying so many fees already from facility fees to parking fees that the ticket prices are just horrendous. So Ticketmaster is profiting at least twice by using these scalpers, which is why they have really no reason to not help these people buy these tickets. They’re going to make twice as much money.

Farron Cousins: Absolutely. This is a truly disgusting story. Scott Hardy from Top Class Actions. Thanks for telling us this story. For anybody who wants more information on it, go to topclassactions.com, find out everything about this investigation into Ticketmaster and the scalpers that they’re helping. Scott Hardy, thanks for talking with me today.