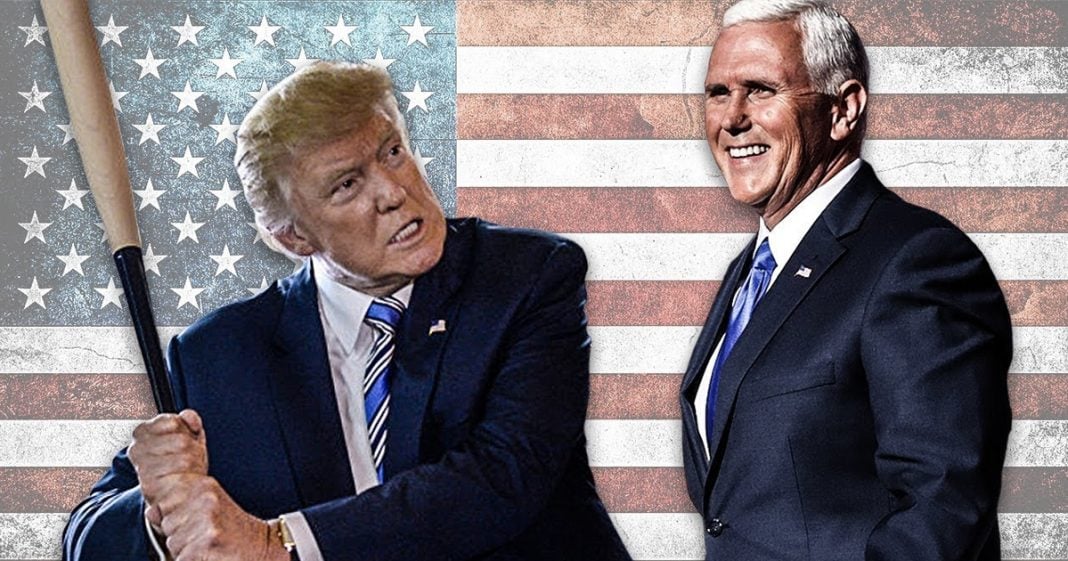 Twitter user @CJNyssen sent us the following question: “If Trump is impeached specifically because of interference in the 2016 election, what happens? Is Pence automatically removed from the office of the VP because the win is invalid? Would a new emergency election need to take place in such circumstances?” Ring of Fire’s Farron Cousins discuss this issue.

We’re going to take some questions from Twitter now, so if you have a question that you want us to answer on this show, send it using the hashtag #askROF.

Our first question comes from @CJNissin, who asks, “If Trump is impeached specifically because of interference in the 2016 election, what happens? Is Pence automatically removed from the office of the VP because the win is invalid? Would a new emergency election need to take place in such circumstances?”

Here’s the thing. Regardless, I think, of whatever comes out of these investigations, there’s virtually no way to nullify the 2016 presidential election. There’s not necessarily a remedy for that in the US Constitution or in any US law, but specifically … Talk about Pence. Does Pence go down with him? Because that’s a question a lot of people have had. We’ve seen it a lot on our YouTube channel.

No, Pence does not automatically go down with him. It’s going to come down to what Mike Pence knew. Was Mike Pence even involved, or was he just a dopey guy, standing up there on stage, who had no idea what was happening behind the scenes?

Honestly, my theory is that it’s the latter. I don’t know that Mike Pence was involved in any of this. I don’t personally think that he was. I could be 100% wrong. Honest to God, I hope I’m 100% wrong, but Mike Pence thus far has not really been involved in any parts of these investigations. We’re not getting people rolling over on Pence. We’re not getting any of Pence’s allies that are having to testify before Robert Mueller. I don’t think Mueller’s even gone down that particular avenue to look at Mike Pence.

Now, should this investigation come back and the results come out, and we find out that, yeah, Trump was trying to get aid from foreign countries to win the election. If he gets impeached, removed from office, Pence becomes President. I think, for sure, there’s obviously going to be investigations into whether or not Mike Pence was then involved in any of this, but I think with what’s happening right now, I do not believe that we’re going to get any kind of information on Mike Pence. It doesn’t appear that he is a target. Again, could be 100% wrong on this, but just based on what we’ve seen so far, the people who we know have talked to Robert Mueller, doesn’t look like Mike Pence is in any way scared, or in any way in trouble at this point.

If something happens to Trump, Mike Pence takes over. There will be additional investigations to find out whether or not Pence was involved, or what he knew. But as of right now, I think Pence is just sitting back, hoping quietly that the President gets removed from office.