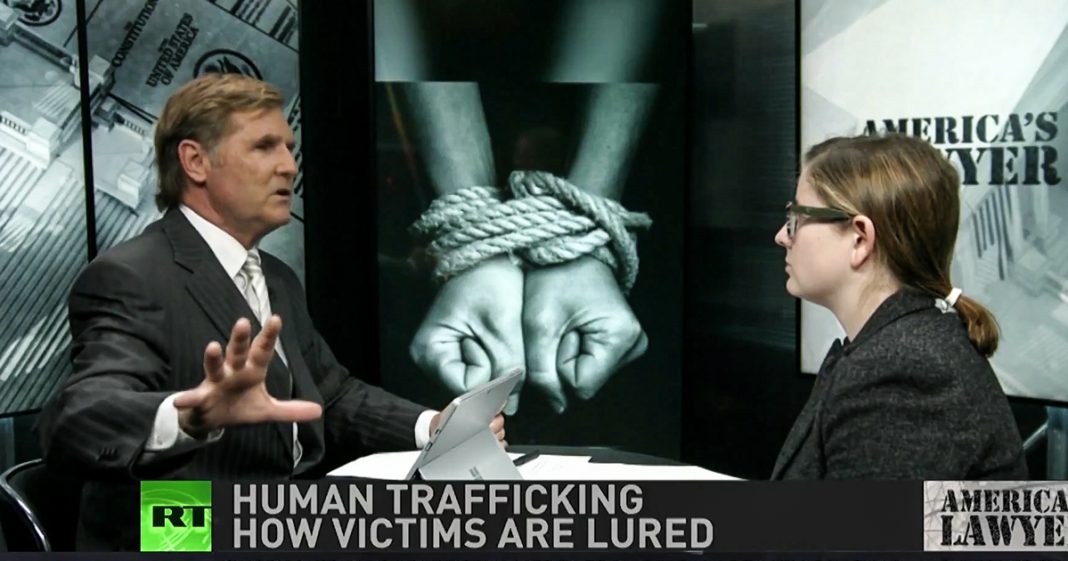 Via America’s Lawyer: Mike Papantonio and Attorney Becca Timmons take a look at how bad the problem of human trafficking has become, and how trial lawyers are trying to change the landscape and hold the businesses that are aiding human traffickers accountable for their actions.

Mike Papantonio: Human trafficking is a problem that’s getting worse all around the globe. In the United States, the number of people being forced into modern day slavery is growing at an alarming rate, and so far, lawmakers and law enforcement officials have barely made a dent in the number of people being bought and sold. Today, trial lawyers are trying to change the landscape and hold the businesses that are aiding human traffickers, hold them accountable for their actions.

Here’s how bad the problem has become. In the US, cases of human trafficking have increased in all 50 states. A similar trend is happening all around the globe, and while there are certain groups that are more at risk than others, the sad reality is it can happen to anyone, anytime, anywhere. Reports show that illegal human trafficking has now surpassed the illegal sale of transport of firearms across the globe, and it’s turned into a $32 billion industry.

Joining me to talk about that is Rebecca Timmons. Rebecca, look, you’re at the front of this right now. You can’t say it’s new litigation coming out of the civil end of this, but it is relatively new where you have civil lawyers trying to step in and fill the gap for what’s been left out there by government or law enforcement. As you’re looking at it, give me your idea of how you would quantify human trafficking. What is human trafficking? Give us an idea what the problem is and how bad it is today.

Rebecca Timmons: Human trafficking is the use of fraud force or coercion to force somebody into some form of forced labor, whether that’s commercial sex, forced labor in other sectors of agriculture or a restaurant business or hospitality business.

Rebecca Timmons: A human trafficking victim, they can be picking vegetables. They can be cleaning hotel rooms. They can be forced into prostitution. It takes all kinds. It comes around in all kinds of different forms and fashions.

Mike Papantonio: Who are the victims? We have this notion. We see the movie, Taken, and you’ve got Liam Neeson playing out this part where his daughter has been trafficked and we think, well, this is the unique way this happens. People are just pulled off the street, and they are, by the way. They are. That story is actually based on some real life cases of women who have been trafficked, but it also falls into other kinds of victims, doesn’t it? Who are the people that we expect to be targeted?

Rebecca Timmons: Human traffickers, they’re predators. They don’t care about how young a victim is, their socioeconomic status, their ethnicity. Anybody can become a human trafficking victim. When it comes to the most disturbing form of human trafficking that’s going on in the United States, which is the sale of children for sex, overwhelmingly those victims are homeless children, and these are kids, they’re victims before they’re even trafficked. They’ve come from homes with physical abuse, sexual abuse and verbal abuse, all before they get put up on a corner to work.

Mike Papantonio: In other words, as you’ve analyzed this case, and you’re obviously handling these cases and will be for a while because this is a new area of litigation, relatively, you have some lawyers out there that have done a really good job. As a matter of fact, they’re going to be in a program that I’m doing out in Los Vegas where we’re actually presenting how bad human trafficking is. We’re reaching out to civil trial lawyers and saying to them, “Get involved.” The point is this. In order for a trial lawyer to understand they can help, they have to understand who are these people? Who are the people that do this? Where do they come from? How are people brought into human trafficking? Just give me I guess like a 10,000-foot list of what it looks like.

Rebecca Timmons: Well, human traffickers, they use the same tools and infrastructure that you and I use every day. They use airlines, hotels to carry out their criminal enterprise. The most powerful tool that a human trafficker uses to lure victims is the internet. Often, they will find victims on social media, and whether its promises of friendship or relationship or just attention, that’s how they gain the trust of the victim. Then, the traffickers will turn around and sell the victims on marketplaces online.

Mike Papantonio: It’s not just a product of a pimp bringing a girl into the business. The calls we’re getting now, this is an amazing thing that we’re actually seeing the edge of, it’s called the Romeo Predator. Explain what the Romeo Predator is. How does that work? How does it bring people into this trafficking business?

Rebecca Timmons: We most often see the Romeo Predator in child sex trafficking, and that’s where a human trafficker will make contact with a victim and lead them to believe that they will be treated special and that they will have a special relationship and that their lives will be much improved by reaching out to this predator and becoming involved with them.

Mike Papantonio: The place they send this Romeo Predator, is this … If I’m the guest, this is one of the most common things that I’ve seen as we’ve started looking at this litigation. It is where they send out some good looking kid. You got somebody on the street. They approach that child on the street, the homelessness and for teenagers on the street. It’s an appalling number. You probably know the number. I don’t know it off the top of my head, but it’s an appalling number. At any rate, the Romeo then approaches that person, brings them in, gets their confidence, says, “I’m going to make your life better,” and then almost step by step in little gradient steps brings them into trafficking. Is that how you see this?

Rebecca Timmons: Yes. That’s a very accurate description of it.

Rebecca Timmons: Human trafficking can happen on the surface web and the dark web.

Mike Papantonio: When you say the surface web, that’s a web anybody can-

Rebecca Timmons: That’s the internet you and I know, what we can access with our browsers on our desktops. This is your Google, your Facebook. You can type in an address in a search engine and it’ll take you there. The problem with monitoring the surface web and the issue that prosecutors and trial attorneys have come across is that it takes a lot of manpower to monitor every single post on a third-party platform and parse out what’s a legitimate ad and what’s an illegal one?

Mike Papantonio: Let me interrupt you there because I think really what we’re seeing is the attitude of trial lawyers that are looking at this and saying, “You know what? I don’t care. I don’t care that it’s difficult.” If you build a car, you have to have breaks that work, so what does that do? Putting brakes that work, cuts into the profit margin to run the car, to buy the car, to have a car that works. You have to have steering that works. That cuts into the profit margin because it has to be done right.

I have very, very little sympathy for the internet argument that, gee, it’s just overwhelming. We can’t do this. Sorry. You’re in the business. There is AI that’s out there that you could use, artificial intelligence you can use. There’s monitoring programs that can be used. They’re very expensive and, yes, they may cut into profit margin, but it’s something we have to do. What is your take on that?

Rebecca Timmons: The AI tool is very exciting. The Defense Advanced Research Projects Agency, DARPA, has actually developed an entire program that is an interface for law enforcement agencies to search what … to not only find ads of human trafficking victims, but also to locate the people who created them. Essentially, we’re starting to outsmart the human traffickers by relying on this great wealth of technology and this great resource.

Mike Papantonio: You’ve got surface internet. As you say, everybody’s got it. My position is … I don’t know what your position is. My position as this litigation goes forward is I really don’t care, Facebook, that you can’t keep up with it. If you’re in the business, you need to figure out how to keep up with it. It may cut into your profit margin, but you need to figure it out. Dark web, we can do very little about. What is your take on that? Do you agree or disagree?

Mike Papantonio: You see a cause of action there that maybe could develop.

Rebecca Timmons: Well, it’s hard to know. It’s an illegal … It’s a criminal enterprise, so the numbers are always going to come with that caveat of what’s reported.

Mike Papantonio: 9,001 hotline. The projections that I’ve seen tells me that human trafficking across the board, not just children, the general human trafficking, it could be as high as 300,000. Have you seen that number?

Mike Papantonio: The only tangible evidence we have right now comes from what we see with this hotline. I got to tell you this. Outraged by the Wall Street Journal. They have some cat that writes with the Wall Street Journal trying to say this is about nothing. Well, this idiot has done these stories, they call investigative stories that says, oh, this is much overstated. I’d like to know what he’s relying on. You’ve seen the articles. You know who I’m talking about. The Wall Street … not Wall Street Journal. Washington Post. The Washington Post is coming out with this position, oh gee, this isn’t as bad as we think it is. It’s actually worse. These new statistics are showing it’s worse than we thought it was two years ago. Are you seeing that develop?

Rebecca Timmons: Oh, absolutely. Just looking at the testimony of some of the parents of victims and the victims themselves. There’s no denying that this is happening, and there’s no way to know the full scale of it. I think it’s ludicrous to say that it’s overstated.

Mike Papantonio: Yeah, I don’t think it’s overstated at all, and I think it’s going to continue to get worse. Becca, thank you for joining me. Okay, good luck on this. You got a lot of work to do.