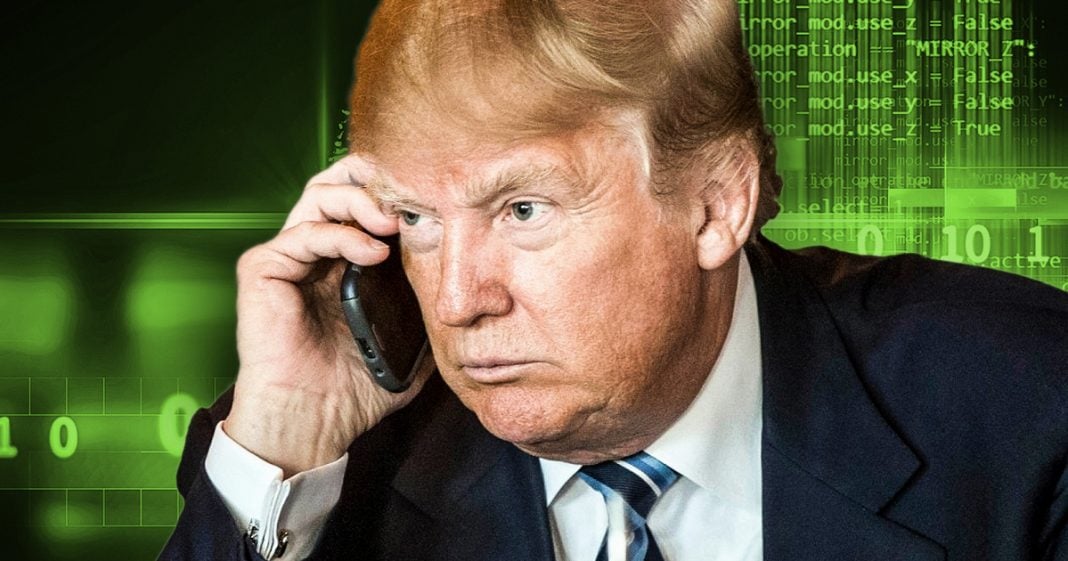 US intelligence agencies have now confirmed that one of Donald Trump’s 3 iPhones has been hacked by both Russia and China, and that the countries have routinely listened into the President’s calls. Trump had been warned repeatedly against using his private phone for this very reason, yet he chose not to listen to anyone and now we know that he’s been tapped. Ring of Fire’s Farron Cousins discusses this new report.

Last night, even after multiple, high profile, democratic politicians, donors, actors, everyone else, media outlets, after they received bombs, Donald Trump still decided he was going to hold his rally yesterday evening. The rally began with the crowd chanting, lock her up. Again, this is just hours after it was reported that Hillary Clinton received a pipe bomb in the mail.

Lock her up, is what that idiotic crowd was chanting. Let’s talk about lock her up. Because the things that’s pissed off conservatives, republicans, the MAGA crowd, is the fact that Hillary Clinton had a private email server. That’s what her emails were hosted on. There’s no evidence at all that suggest that this email server was attacked by foreign adversaries.

But they’re mad that she used it and she could have risked classified information getting into the hands of the enemy. That alone is reason to lock her up, according to the MAGA crowd. If they think that that’s a reason to put Hillary Clinton in prison, then I’m assuming they’re also wanting to put Donald Trump in prison, because a new report from the New York Times, shows that yes, Donald Trump is still using his private cellphone.

Oh, and by the way, we have evidence now that proves that yes, the Chinese government and the Russian government have also been eavesdropping on his phone calls from this unsecured iPhone, that the president refuses to put down. Foreign governments have officially hacked and tapped into the phone of the president of the United States.

Here’s what’s happened, Donald Trump reportedly has three different iPhones. Two of those have been secured by the NSA. One of them is unsecured, and the president does not want it secured. That is his private personal cellphone. One of the ones that is secured actually only works on WiFi, and that is the one that he uses for Twitter according this New York Times report.

He has a phone just for his horrible Twitter account. But it’s the unsecured one that’s causing problems, ’cause they know, the intelligence agencies here in the United States that mostly the Chinese government has been listening into his phone calls. What they’re doing is they’re finding out who Donald Trump is having these private, friendly conversations with.

They’re finding out what kind of policy proposals he’s talking about with these people, so that they can get a headstart on them, so that they can use this private information about the president to manipulate him. The report says that at least two different people have now been targeted by China. They’re sending their businessmen to go do this.

One is the CEO of the Blackstone group, the other is Steve Wynn, a Las Vegas Casino mogul, and they’re trying to get to these men, to influence them and then have them influence the president in a way that benefits China. That’s what is happening in the country today, all because Donald Trump refused to put down his private, unsecured cellphone.

He had been warned multiple times. We’ve even talked about this on this program here. Reports have been coming out since the man took office that he refuses to give up his private cellphone. Everybody’s telling him that it’s easily hackable, and likely hacked already. And now we find out that it was.

They are listening in. They do know every dirty secret about this president. We can only hope that he’s not leaking classified information to his buddies, which he most likely is. Because the Chinese then have that too. If these MAGA folks at these rallies think Hillary Clinton should be locked up for having a private email server, that wasn’t accessed by foreign adversaries.

Then I can only imagine that pretty soon they’re going to be calling for Donald Trump to be locked up in GTMO, over the fact that he knew about the dangers of his private cellphone, decided he knew better than everyone else, and then ended up leaking information to the Chinese, who are using that information to manipulate policy here in the United States.