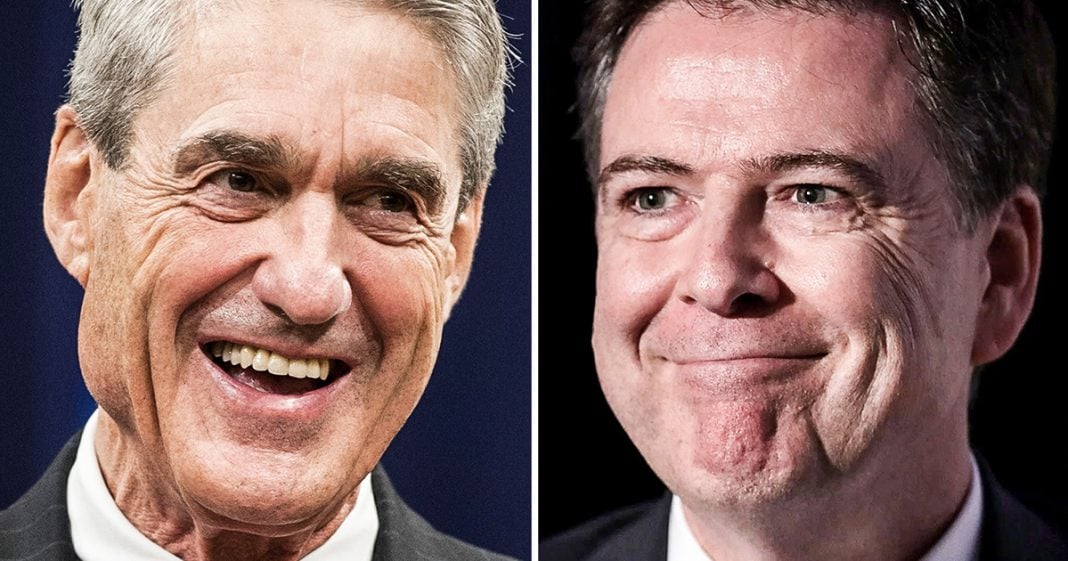 Not long ago, Donald Trump claimed that he could provide hundreds of photos of James Comey and Robert Mueller “hugging and kissing,” but thanks to a Freedom of Information Act Request filed by investigative journalist Jason Leopold, we now know that no pictures exist. The FBI has confirmed that they don’t have any pictures at all that would suggest the two men are close, which means that they probably had to at least look for them to appease the President. Ring of Fire’s Farron Cousins discusses this.

A few months ago, Donald Trump tweeted out the following. He said, “He’s Comey’s best friend,” speaking of Robert Mueller, and, “I could give you hundred pictures of him and Comey hugging and kissing each other. You know he’s Comey’s best friend.” You already said that earlier in the tweet. However, nonetheless, all right, Donald Trump few months ago claims that he’s got hundreds of pictures of James Comey and Robert Mueller quote “hugging and kissing.” Now, obviously I don’t think Donald Trump meant in a romantic way. Who knows with Donald Trump, though. Maybe he did mean that, and apparently he had these hundreds of pictures stashed somewhere privately, so investigative reporters did what investigative reporters are supposed to do, and they filed a Freedom of Information Act request with the FBI saying, “Hey, can we please see some of these photos that Donald Trump says exist of Comey and Mueller hugging and kissing?”

Jason Leopold with BuzzFeed, a phenomenal investigative reporter, filed these FOIA requests, and the FBI had to come back and say, “Okay, well, we got your request. We’ve been looking for these pictures, and yeah, we don’t think they even exist.” Now, Donald Trump lying about this existing, about these photos being real, is not surprising at all. It was obvious to everyone with a brain at the time that no, this isn’t a true thing that actually happened, and there weren’t hundreds of times that it happened that also happen to coincide with somebody being there having a camera, so the FBI had to come out after the FOIA request. They actually had to go look for the pictures. They had to do a search. They had to try to find something in their databases or in their files of these two men being friends, and they couldn’t come up with anything. Although, according to the response to the FOIA request, they did say, “Now, we can’t say that just because we didn’t find them that doesn’t mean they don’t exist, but they certainly don’t exist here in our offices anywhere.”

The reason this is important is because it shows how desperate this administration, Trump in particular, has become with his smears on Robert Mueller. He is trying to make this investigation disappear and delegitimize it before they even come out with any of their results. Now, we learned earlier this week that it’s likely Robert Mueller has information showing that Roger Stone or one of his associates informed Donald Trump that an email leak was about to happen with regards to Hillary Clinton and the DNC. They knew about it in advance and they allegedly told the president of the United States this.

Things are heating up in the Mueller investigation, yet unfortunately there hasn’t been too much coverage of that recently. Networks are kind of preoccupied with actually bigger issues at the moment, a very heated midterm battle coming up. We’ve got several governorships on the line that are going to be very close races and could be historic based on the outcome. We have massive voter suppression in Georgia. We have had massive hurricanes come out, and we’ve had Donald Trump giving his hate-filled rallies. We’ve had the MAGA bomber out there, so yeah, people aren’t focusing as much on Robert Mueller right now, which is actually a good thing, because he needs to be able to work and do his job without constant attacks from the president of the United States. But in this particular instance, the hundreds of photographs of him and James Comey hugging and kissing, even the FBI at this point is willing to say, “Yes, the president lied about that.”