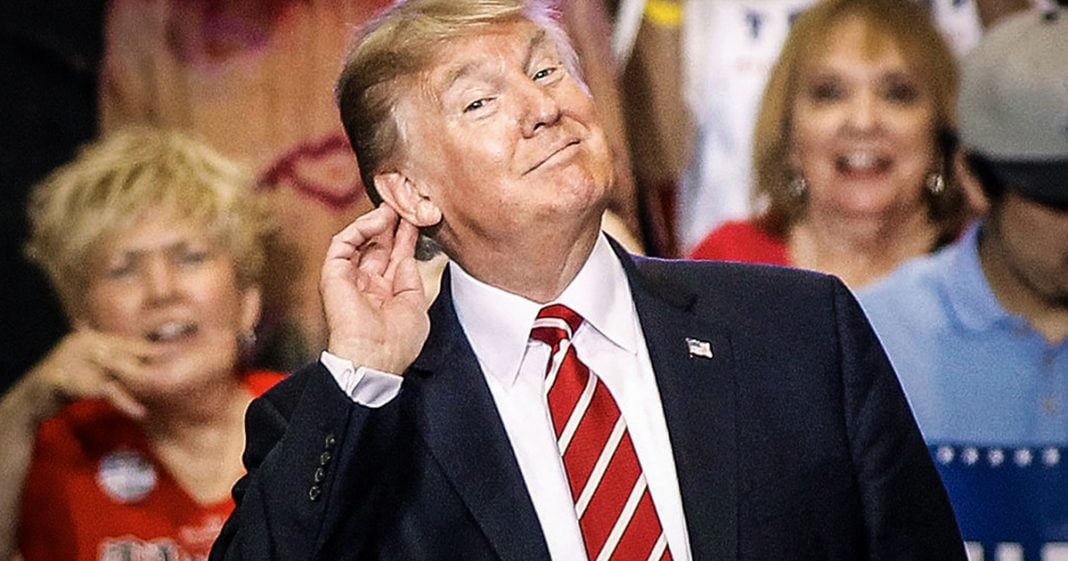 Donald Trump has decided that, like Congress, he would also enjoy not doing his job until after the midterm elections have concluded, so he will be holding two rallies per day as we approach that finish line. While this is obviously a dereliction of duty on the part of the President, at least he can’t do much more damage to the country if he’s not signing executive orders in the Oval Office. Ring of Fire’s Farron Cousins discusses this.

Donald Trump hates being the President of the United States. Now, don’t get me wrong. Donald Trump loves being called President of the United States. He just hates all of the work that goes along with it. He wants the adoration. He wants the admiration that comes whenever he does these stupid little campaign rallies. He wants to be able to take his time and go play golf. He just doesn’t want to do any of the actual work, and that’s why we’re looking at a president who, at this point in his administration, has taken more vacation days than anyone else in history.

Now, this has kind of created a bit of a rift. It’s not a real rift. It’s just one that you kind of see on social media, because you see some people saying, “Well, this is good. When he’s not in the Oval Office signing executive orders and enacting these horrible policies, he’s not harming the country any further,” and to an extent, that’s true, obviously. The problem is that these rallies that he does are incredibly toxic. They poison the political discourse. They rile up these hardcore angry Republicans, and that’s when the bad things happen, not policy-wise, but humanity-wise.

I mean, just this week, we have seen explosive devices mailed to the Clintons. We saw an explosive device mailed to George Soros, because Republicans are spending all their time making these people out to be evil demons that need to be destroyed, and that is exactly what happens at Donald Trump’s rallies. If this man decides to do 12 rallies in the six days ahead of the midterms, we will see violence.

The people that go to these rallies are not just normal, average, workaday Republicans. They’re the hardcore, alt-right scum of the Republican Party, the bottom of that Republican barrel. Those are the ones who show up at these rallies, and the things they are capable of, the things that we have seen them do over the last two years, are absolutely criminal. If Donald Trump decides that he doesn’t want to be president for a few days so he can go do more of these toxic rallies, we’re going to see more of this.

We’re going to see an unprecedented number of lies coming out of the President’s mouth. But at the same time, if he’s out there doing these rallies, traveling the country, probably going to squeeze in a few golf games in between there, it does keep him out of the Oval Office. But it begs the question of who’s going to be running the country. We’re talking about six days. Six days is a long time, especially with this administration. Everything can change in six days.

Is it going to be John Bolton, National Security Advisor, sitting there calling the shots, pushing us further to a war with Iran? Is it going to be John Kelly, the hothead in the White House, going after his political enemies both in and outside of the administration? Is it going to be Mike Pence imposing his religious law on us here in the United States? Who is going to be running the country while Donald Trump is out there clapping for himself during his rallies like some kind of moron?

I mean, if you actually watch one of these Trump rallies, every minute or so, the guy does that. He stops talking and he … Sometimes he even turns around to the crowd behind him. That’s what it’s about. He wants to be more famous. He wants to hear that applause. It’s like an addiction for him. The problem is he is also the President of the United States, and he does have a job to do, whether we want him to do it or not. This country has to be run by somebody, and unfortunately, we have a moron running it right now.

If that moron’s not over there running it, then we have a bunch of other evil little morons who are going to take over that position. There’s no good ending for any of this. Either somebody else is sitting in the White House calling the shots for a few days, shots that are going to help destroy this country even further, Donald Trump’s going to be out there riling up his angry, belligerent, violent base, encouraging them to go out and do unspeakable things to people that disagree with him politically. Yeah. This is going to end bad for everyone, except, of course, for Donald Trump, who apparently feeds off the applause of his supporters.