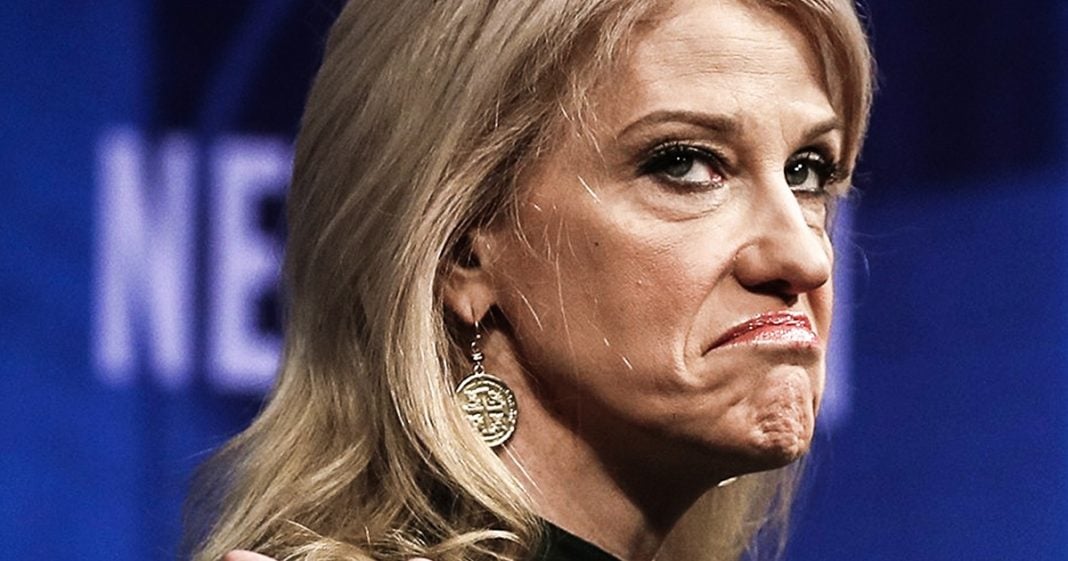 Kellyanne Conway just can’t seem to figure out how to operate inside the law, and that’s why she’s now being popped with yet another Hatch Act violation complaint, this time for using her official Twitter account and TV appearances to promote a political agenda and Party. Those types of actions are 100% against ethics rules for administration officials, but that hasn’t stopped Kellyanne from repeatedly doing these types of things since gaining power. Ring of Fire’s Farron Cousins discusses this.

Kellyanne Conway, the Counselor to the President of the United States, whatever that means, but that’s her title, has once again found herself in trouble because Citizens for Responsibility and Ethics in Washington, CREW, has filed yet another Hatch Act violation complaint against Kellyanne. You see, Kellyanne Conway, according to this latest complaint, just can’t stop using her official capacity as Counselor to the President to promote the Republican party and to promote individual candidates running for office, which is the same thing she is doing with her official Twitter account.

And according to the Hatch Act, all of that is impermissible. You cannot do it, and yet Kellyanne has repeatedly done it. She’s actually been doing it since she first came to office. So far, all of the complaints that CREW has filed against Kellyanne Conway have resulted in disciplinary action against Kellyanne Conway. Unfortunately, none of that disciplinary action has been removing her from office. Most of it is that she actually just has to sit for ethics retraining because she can’t seem to get it right.

That’s probably what’s going to happen in this particular instance. So just a little more on what she’s been doing, she’s been going on TV, she has identified Counselor to the President, she is pushing the MAGA brand and the Make America Great Again slogan. All of those have actually been expressly forbidden by the Office of Special Counsel at the White House because if a White House official goes out and says those things, it is a violation of the Hatch Act because that is expressing your support for a political candidate/party, and you cannot do that in your position.

Kellyanne has obviously been doing that, she does it every time she goes on Fox News. And it’s not just about promoting MAGA, it’s promoting other Republicans or attacking Democrats. She’s not allowed to do it, yet the network shows, CNN and Fox News and ABC, continue to have her on their programs where they let her violate these ethics rules. What I would like to see just one time when she comes out and says one of these things is I would love to see a host say, “Hold up, Kellyanne, what you just did is a violation of the Hatch Act. You’re violating ethics laws right here on live television, why should we believe anything you say when you have no regard for the rules or for ethics in general?”

That is what these TV hosts need to be saying to her, and I’ve seen some of them be pretty tough on her. Some of them attempt to hold her accountable, but until you call her out for violating the law, none of the other hard lines of questioning that you throw at her are going to matter. Stop putting her on TV, stop letting her say whatever the hell she wants with her alternative facts, because the real issue isn’t just the alternative facts, apparently now we also have to deal with Kellyanne Conway’s alternative ethics. And believe me, it’s not sitting too well with the Office of Special Counsel that has to continuously sit her down and tell her what the law says and how many times she’s broken it.