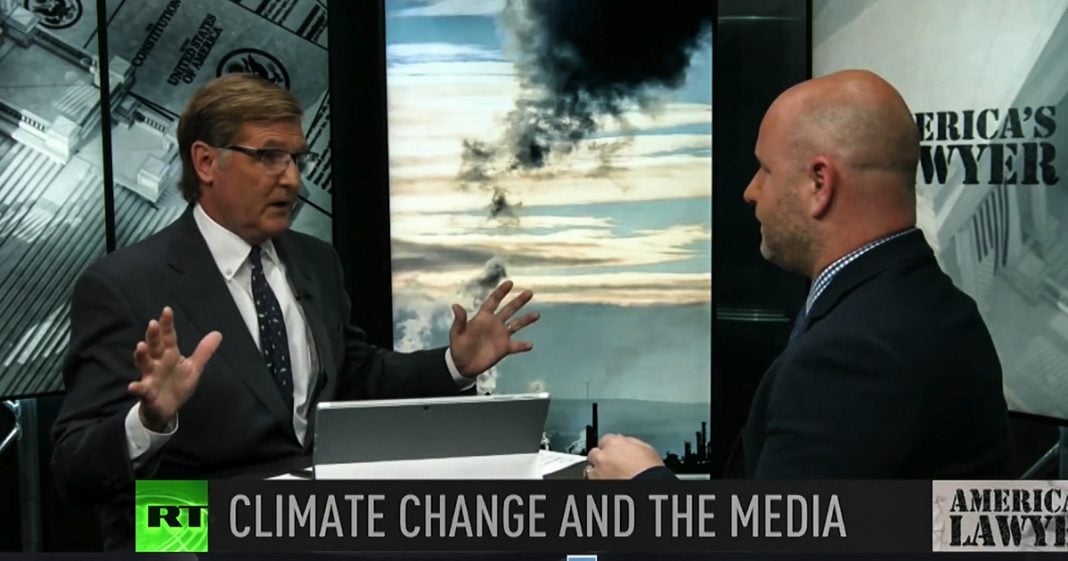 Via America’s Lawyer: Climate change might be the biggest threat facing our country but that hasn’t stopped the corporate media from burying multiple climate change reports in recent weeks. Mike Papantonio is joined by Farron Cousins to discuss.

Mike Papantonio: Climate change might be the biggest threat facing our country and it’s something that voters are increasingly worried about ahead of the midterms. But that hasn’t stopped the corporate media from burying multiple climate change reports in recent weeks. We know why, right? We’ve already seen the reports why. Because advertisers don’t like it. Shell, Exxon, they don’t like it. So, of course, the corporate media does what the advertisers order them to do. That’s why this is really the only kind of venue where you can get the news that really matters. You’ll get it in some of the independent, some of the social media, but not corporate media anymore. Can you imagine them burying the story on climate change? What’s your take?

Farron Cousins: Well, you nailed it right there. Look. Chris Hayes with MSNBC actually responded to somebody on Twitter a couple of months ago saying, “Listen, we don’t really talk about it. They won’t let us talk about it,” actually is kind of what he said. But because it’s a ratings killer. The truth is, yes, it’s not the biggest draw for people, but it is mainly because of those advertisers.

Farron Cousins: You’re killing the planet and you’re getting away with it, making billions of dollars.

Mike Papantonio: Okay, so the trade-off is, yes, Exxon, we know you’re lying. Chevron, yes, we know you’re lying. But here’s the change. You want to talk about what a wonderful company is and people like Phil Griffin with MSNBC, or Andy Lack with MSNBC, or all of them really, are going to say, “Okay, here’s the deal. We won’t talk about this ugly thing called climate change if you will run your rehab lie advertisement on our media.” That’s exactly what’s happening.

Mike Papantonio: No. You’re not going to buy a Patriot missile. The company, the corporate media, doesn’t report all the bad things that are happening on lead up to war or the use of … sale of some of these arms to Third World countries. They won’t report any of that because the money’s too good. This is exactly the same thing.

Mike Papantonio: Extinction begins in 2030. Viewers watching this show, people don’t like these stories because it scares them. I don’t know. It’s too complicated. They don’t realize it’s truthful. What’s your take on that?

Farron Cousins: Well, it’s very disappointing because, look, right now this week, we’ve got this new IPCC report showing we’ve got until about 2040. Well, a couple of weeks ago, we had a report done by scientists in multiple countries sign off on it across the planet, they said we’ve got until about 2030. We’re looking at that window right there. 2030 to 2040, at best.

Farron Cousins: Climate scientists like Michael Mann have already said that’s being a little too generous.

Mike Papantonio: Okay, if people see a climate story on their feed-

Mike Papantonio: … they will pass it over either because they’re so darn ignorant that they don’t understand it’s really happening, it scares them, I don’t know. But we know that and here’s my point. Corporate media knows that, too. Therefore, if it’s not hot, it doesn’t sell. Look, here’s what they know. They know Kim Kardashian sells better than climate change. They know that Trump hate stories, Republicans hate stories, sell better than climate change. That’s what we’re seeing right now.

All right. Thanks, Farron. Again, thanks for joining. These stories get crazier, a little bit crazier, every single week.