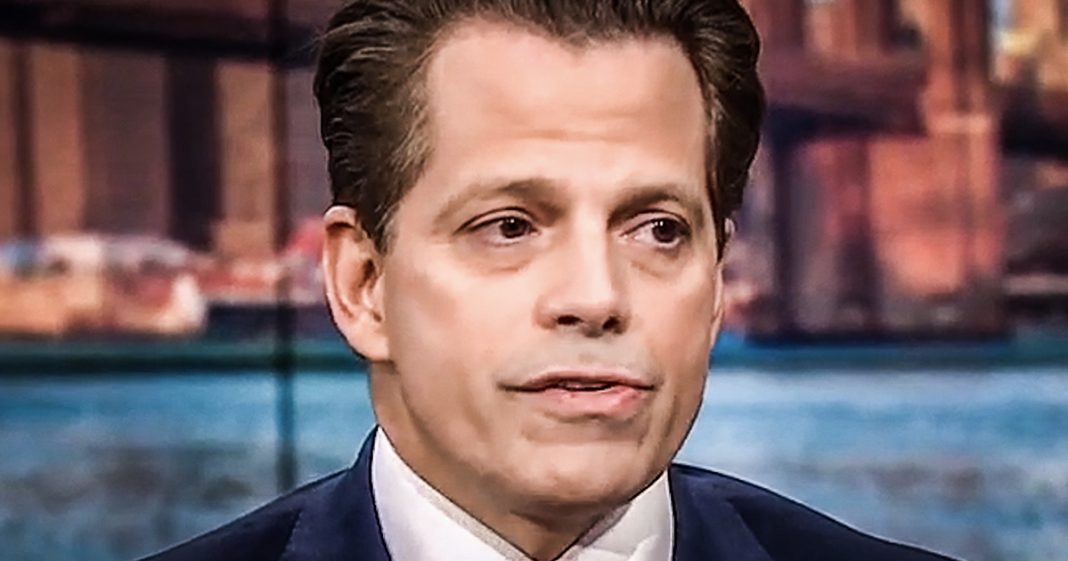 During a recent CNN interview where he was promoting his new book, former White House communications director Anthony Scaramucci said that President Trump needed to “dial down the lying,” but he also added that its somewhat ok because he’s a politician now and politicians “lie whenever their lips are moving.” Scaramucci, even when asking his former boss to stop lying so much, still can’t bring himself to say that the President’s lies are dangerous. Ring of Fire’s Farron Cousins discusses this.

Former 10-day White House Communications Director Anthony Scaramucci appeared on CNN earlier this week to not only promote his new book, but to tell all of us in the United States that liars are not good people, and that nobody should tell a lie. And according to Scaramucci, kind of that also applies to the President. Take a look.

John Berman:
… and I think you and I agree on, I don’t like when people say, “Oh, because someone didn’t go to college, they don’t care about lying,” because I know for a fact that people do care about lying. Your book, The Blue Collar President-

John Berman:
I know you … You explain it.

Anthony Scaramucci
Let me rephrase it. Okay, okay. Let me rephrase it, because I think it’s super important for everybody to understand. Nobody should lie. I’m not a big believer in lying, but politicians happen to lie.

John Berman:
Do you want to say that to the camera and to the president?

Anthony Scaramucci
Nobody should lie-

Anthony Scaramucci
… but you’re a politician now, so politicians lie when their lips are moving, and so all these people lie. But you should probably dial down the lying, because you don’t need to. You’re doing a great job for the country, so dial that down and you’ll be doing a lot better.

That’s right, Donald. I know you’re a politician now, as Scaramucci says, so obviously you lie every time your mouth is moving, because literally every other politician does that. But just dial it down a bit. Just turn it back a little. Maybe instead of telling seven lies per day, only tell four. That’s Donald Trump’s lie average, by the way, seven per day, seven, and that number’s actually been steadily increasing. And as we see him do more of these rallies, those numbers get even higher and higher and higher and higher.

But Scaramucci here is trying to have it both ways. He’s trying to play the middle, and he fails spectacularly to appeal to either side, because he’s calling the president a liar. He doesn’t mince words there, “Yeah, Donald Trump lies,” so that’s going to piss off the right. But then he says, “But it’s okay, because all of his … all politicians lie, and Donald Trump’s a politician now, so he’s allowed to lie.” Yeah, that’s going to piss off everybody else.

So what exactly are you hoping to accomplish here, Scaramucci, the guy who spent 10 days in the Trump administration before being fired? Why should we listen to anything you have to say? More importantly, don’t tell the president to just dial it down. Tell him to stop. I mean, come on. Tell him to stop. That’s all you had to do was say, “Stop lying.” Stop lying, two words. Yet you, as somebody who’s allegedly a communications director, can’t even say, “Stop lying”? No wonder you got fired after 10 days, you idiot.

You don’t just say, “Hey, dial it down a bit. There’s no need to lie, so maybe just tell fewer.” No, you say, “Hey, here’s some good numbers you could talk about. Stop telling lies.” And you couldn’t even do that when pressed by CNN’s John Berman.

You are a disgusting excuse for a human being. The only reason you’re out there trying to appeal to both sides right now is because you want to sell a few copies of your new book, and maybe make it onto that best seller list, seeing as how you’re obviously not going to make it on the list of good people from the Trump administration. Good luck with that.

My advice to everybody out there, don’t waste your time on this Scaramucci book. It’s not going to be filled with anything that’s going to give us any insight into the administration. It’s not going to give us any decent insight into politics here in the United States. It’s just yet another former member of the Trump administration trying to make a quick buck off of his 10 days working for the president.